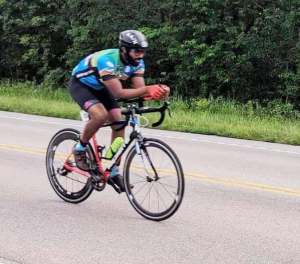 Kabir Rachure has successfully completed the 2019 edition of Race Across America (RAAM).

The cyclist from Navi Mumbai, India, covered the roughly 3000 mile (4800 kilometers) distance in 11 days, 22 hours, 43 minutes, as per results available on the leader board section of the event’s website. RAAM’s course stretches right across the United States, from Oceanside in California on the US west coast, to Annapolis in Maryland on the east.

Kabir’s support crew for RAAM was anchored by his sister Sapana. Earlier, she had been his crew chief for several races in India too. At roughly 260 miles left to finish, she recalled the main challenges the team had faced at RAAM that far. “ Till now Kabir’s longest ride was 1750km Ultra Spice race, which he finished twice. So after that, the entire thing is new territory for us. The biggest problem is sleep management after the sixth day,’’ she said. According to her, Kabir was sleeping around two and quarter hours daily with short naps during daytime as required. They had three support vehicles and a crew of ten. All crew members were from India. The team had four bicycles for use during RAAM – a Lapierre Pulsium, a Lapierre Aircode, a Colnago C-RS and a Specialized.

Kabir, 29, is the third Indian cyclist to complete RAAM in the solo category.

The previous such finishes were in 2017, when Lt Col Srinivas Gokulnath earned the distinction of being the first Indian solo cyclist to complete RAAM. He finished in 11 days, 18 hours, 45 minutes. Srinivas was followed by Dr Amit Samarth, who became the first Indian to complete RAAM in the solo category in the very first attempt in 11 days, 21 hours, 11 minutes. That year, Kabir too was there at RAAM; he was part of support crew for Samim Rizvi, cyclist from Bengaluru. Among Indian cyclists, Samim had been a pioneer at attempting RAAM solo. Unfortunately Samim’s 2017 attempt ended up DNF (Did Not Finish), somewhere past 900 kilometers into the race. Not wanting to give up on his chance to see the RAAM route, Kabir had then taken a car and gone up till Durango in Colorado before returning to California and later, back to India.

These solo rides aside, the first Indian finish at RAAM was in 2015 when the Mahajan brothers – Dr Hitendra Mahajan and Dr Mahendra Mahajan – completed the race in eight days, 11 hours as a two person-team.

In other finishes at RAAM 2019, Brazil’s Daniela Genovesi crossed the finish line first among women solo riders. She covered the distance in 10 days, 17 hours, 59 minutes. Coming in second was Leah Goldstein of Canada, who reached the finish line in 10 days, 19 hours, 28 minutes. Both riders belong to the 50-59 years age category. Daniela’s average speed of 11.9 miles per hour is a new record at RAAM for women in this age group.

For more on Kabir Rachure please click on this link: https://shyamgopan.com/2018/12/19/three-years-and-raam/

The 2019 edition of RAAM also saw Krishna Prakash, senior police officer from Mumbai complete the shorter Race Across West (RAW), a race carved out from the initial stages of RAAM. His crew chief was Amit Samarth.

In a report dated June 24, available on the event’s Facebook page, the race organizers said: Seana Hogan (USA) arrived on City Dock here in Annapolis at 8:31 last night, to make a success out of her being our first-ever age 60-69 entrant. This 13th RAAM for Hogan was a dramatic one indeed. After being up among the younger women in this year’s field of 8 women for the first 1/3 of the race, she was stopped in Colorado for nearly 24 hours to attend to saddle sores.

As our first 60-69 entrant, Hogan was granted additional time to finish in an effort to establish a benchmark for that category.