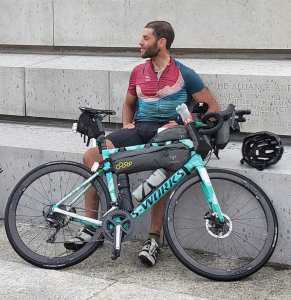 Abdullah Zeinab at the finish in Yorktown (Photo: Chip Coutts / this photo was downloaded from the Facebook page of Trans Am Bike Race public group and is being used here for representation purpose. No copyright infringement intended.)

Melbourne-based cyclist Abdullah Zeinab has won the 2019 Trans Am Bike Race in the US.

He covered the roughly 4200 mile (6800 kilometers) distance in 16 days, nine hours and 56 minutes, a new course record. Abdullah bettered the previous record by over 10 hours, the event’s Facebook page informed in a post early today.

Like Race Across America (RAAM – its roughly 4800km long; its 2019 edition began on June 11), Trans Am too is a coast to coast bike race. Its course stretches from Astoria, Oregon on the US west coast to Yorktown, Virginia on the east. The race passes through ten states. There is however a significant difference between RAAM and Trans Am. The former is a supported race. The cyclist has support crew accompanying him / her in a vehicle; they take care of logistics, navigation, bike maintenance, nutrition, rest and shelter. Trans Am is an unsupported (or self-supported) race with no support crew tagging along. The rider has to take care of everything.

Trans Am cyclists, journey with essential gear packed on their bicycle. Rest and shelter for them is usually a mix of camping, houses and motels. According to Wikipedia, all food, accommodation and repairs on the Trans Am Bike Race have to be purchased from commercial sources. One specialty of Trans Am is that there appears to be no rigid and fast rule on how participants should treat the event. Some take it as a race. Others take it as an opportunity to bike across the United States and see the land. As the clock keeps ticking this difference in perception, shows in the time taken to finish.

In 2018, Trans Am was won by San Diego based-Peter Andersen. He covered the route in 16 days, 20 hours, 41 minutes. At the same event, Nishant Iyengar from Bengaluru, participating in Trans Am for the opportunity to pedal across the US, had finished in 56 days, seven hours, 11 minutes. He placed 56th among 58 finishers. For more on Nishant and Trans Am please click on this link: https://shyamgopan.com/2018/10/19/america-the-trans-am-way/

In 2018, Abdullah Zeinab had won the unofficial Indian Pacific Wheel Race, a 5500km bicycle race across Australia, from Perth to Sydney.