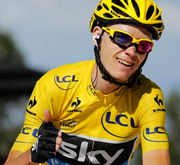 Please scroll down for updates

It has left him seriously injured.

The 2019 Tour de France is scheduled to commence in July.

A subsequent statement from his team – Team Ineos – confirmed that Froome will miss the 2019 Tour.

The accident occurred on Wednesday in central France, outside the town of Roanne in Loire.

Froome was doing reconnaissance of one of the stages of the Criterium du Dauphine, an event he uses to prepare for the Tour.

According to a report in The Guardian, he lost control amid high winds when attempting to blow his nose while cycling. The cyclist crashed into a wall. At the time of accident, reports said, he was moving at close to 60 kilometers per hour.

Froome suffered a broken leg, a broken elbow and fractures to his ribs.

He is in intensive care, reports said.

Chris Froome. This image was downloaded from the Facebook page of Team Ineos. It is being used here for representation purpose. No copyright infringement intended.

Update / June 16: Chris Froome, who is in hospital after a major crash that left him badly injured, has expressed gratitude for the outpouring of support and well wishes. In a message available on the Facebook page of Team Ineos (Froome’s team), the cyclist said, “ Firstly, I just want to say a huge thank you to everyone who has sent their best wishes to me since the crash. This is obviously a tough time but I have taken a lot of strength from the support over the last three days. The outpouring of support has been really humbling and something I would never have expected.

“ I’d also like to extend my gratitude to the team, especially Doctor Richard Usher and his medical staff, who have been exemplary since the crash. In addition, I am so thankful to the emergency services and everyone at Roanne Hospital who assisted and stabilized me, as well as the surgeons, doctors and nurses at the University Hospital of St Etienne, who have really gone above and beyond the call of duty, for which I am ever so grateful. I know how lucky I am to be here today and how much I owe to all the paramedics and medical staff on the race.

“ Whilst this is a setback and a major one at that, I am focusing on looking forward. There is a long road to recovery ahead, but that recovery starts now and I am fully focused on returning back to my best.

“ Finally, I want to thank my wife Michelle and my family. They’ve been with me every step of the way and their love and support will motivate me to return as quickly as possible.”