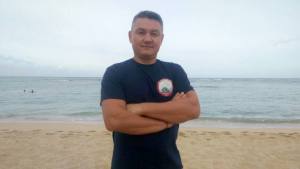 Ion Lazarenco Tiron (This photo has been downloaded from the Facebook page of the swimmer and is being used here for representation purpose only. No copyright infringement intended)

Ion Lazarenco Tiron of the Republic of Moldova was recently voted the 2018 World Open Water Swimming Man of the Year.

The list of nominees had included Rohan Dattatrey More of India. The winners were selected by the public in a global online poll.

The WOWSA Awards honor people who best embody the spirit of open water swimming, possess the sense of adventure, tenacity and perseverance that open water swimmers are known for, and have positively influenced the world of open water swimming. About Ion Lazarenco Tiron, the WOWSA website said: Ion planned and accomplished his first major open water swim with a 235 km Swimming Marathon Nistru – Unites Moldova charity stage swim that took 8 days – and raised lots of money and awareness for charity. He forged on and ultimately developed a massively hardened veneer and a tough mental attitude in his adopted Ireland. This year (2018), he culminated his four-year Oceans Seven journey with a successful crossing of the Cook Strait. Along the way in the midst of receiving a slew of awards in Ireland and completing an Ice Mile, he has completed the Triple Crown of Open Water Swimming as well as crossings of the Strait of Gibraltar (4 hours 41 minutes), English Channel (13 hours 34 minutes), North Channel (16 hours 23 minutes), Catalina Channel (12 hours 1 minute), Molokai Channel (18 hours 11 minutes), Tsugaru Channel (11 hours 20 minutes) and Cook Strait (11 hours 5 minutes). He was the first person from the Republic of Moldova to achieve the Oceans Seven and completed a 100 km 3-day stage swim called the Swim of Peace in May together with Avram Iancu on the river Prut between Romania and Moldova to celebrate 100 years of unity.

Hailing from Moldova, Ion moved to Ireland in 1997. An April 2017 article by Sorcha Pollak in The Irish Times, shed light on how Ion commenced his tryst with long distance swimming. In 2011, he read about Tunisian swimmer, Nejib Belhedi, who swam the entire 1400 kilometer-long coastline of Tunisia. A maverick swimmer with many long distance swims to his credit, Belhedi is perhaps best remembered for a set of branded solo swims he created, called World Iron Swim, wherein between 2015 and 2017 he pulled boats of increasingly greater weights. In 2011, Belhedi undertook the swim along the Tunisian coastline as a call for peace not only in Tunisia but in conflict zones around the world. Moldova had experienced its share of unrest in Transnistria, a narrow strip of land between the river Dneister and Ukraine. Inspired by Belhedi’s example, Ion decided to swim the Dneister, which runs through Ukraine and Moldova before emptying into the Black Sea. Following this initial swim, Ion returned to Ireland and decided to pursue Oceans Seven. The first person to accomplish Oceans Seven had been Irish swimmer Stephen Redmond, in 2012. 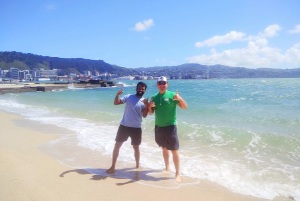 In February 2018, India’s Rohan Dattatrey More completed the Oceans Seven challenge. In 2017, the Pune-based endurance swimmer was selected for the year’s Tenzing Norgay National Adventure Award given by the Indian government. Oceans Seven brought Rohan into contact with Ion. The two swimmers first connected on Facebook. An actual meet-up took time. When Rohan reached Ireland to swim the North Channel, he had the good fortune to train with a friend who was known to both Rohan and Ion and had been with the latter when he successfully swam the North Channel. The two swims – Rohan’s crossing of the North Channel and Ion’s – were apart by about a month.

It was in January 2018 that Rohan finally met Ion. That month, Ion had wrapped up Oceans Seven accomplishing the final swim on the list, the crossing of New Zealand’s Cook Strait. Rohan’s window of opportunity was due in February. They met on the beach at Wellington. Cook Strait separates New Zealand’s North Island and South Island; it connects the Tasman Sea to the South Pacific Ocean and runs next to Wellington. Ion shared his observations of the swim across Cook Strait. “ He guided me well,” Rohan said. Cook Strait was the last swim for Rohan too in his Oceans Seven project. “ Ion was the eighth person to accomplish Oceans Seven. I was the ninth,” Rohan said. At the time of writing, as per Wikipedia, 13 people from around the world had successfully completed Oceans Seven with Rohan being the first (and as yet only) Asian on the list.

For more on Rohan, please click on this link: https://shyamgopan.com/2018/07/13/rohan-more-gearing-up-for-a-new-challenge/