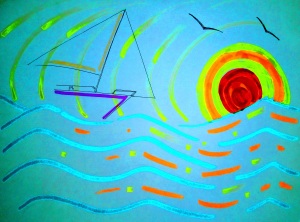 The 2018 Golden Globe Race (GGR) has entered its final phase.

It is poised to see its first finisher in the next couple of weeks.

By the second week of January 2019, of 18 skippers at the start of the race, only five remained in the main race. Of them, four – Jean-Luc Van Den Heede, Mark Slats, Uku Randmaa and Istvan Kopar – were back in the Atlantic having sailed that much around the world.

As per updates on the race website, 73 year old-French skipper Jean-Luc Van Den Heede sailing Matmut, a Rustler 36 Masthead sloop, was in the lead. He was followed by Dutch skipper Mark Slats with Uku Randmaa (Estonia) and Istvan Kopar (USA) trailing him in that order.

Both Van Den Heede and Slats – the two are incidentally sailing identical Rustler 36 yachts; Slat’s boat is called The Ohpen Maverick – were at latitudes corresponding to North Africa on the map. At one point in the race, the French skipper held a massive lead of more than 2000 nautical miles over his nearest competitor. That has since declined. Media reports said that Van Den Heede damaged his mast in a storm; the boat got tilted badly and in the process the mast took a beating resulting in slackened rigging. Although he made temporary repairs at sea and avoided diverting to Valparaiso in Chile for repairs ashore (which would have shifted him from the main race to the Chichester class assigned for those availing one stop), he has had to subsequently proceed in a more measured fashion. Later, he served an 18 hour-penalty for improper use of satellite phone and has also had to put up with a windless, calm sea in the North Atlantic. Thanks to all this, Slats has been closing the gap.  Checked on January 11, 2019, distance to finish (DTF), for Van Den Heede was 1943.5 nautical miles. For Slats, it was 2133.9 nautical miles.

The 2018 GGR began July 1 from Les Sables-d’Olonne, a seaside town in western France. The race involves solo nonstop circumnavigation in a sailboat with technology aboard participating vessels pegged at levels which prevailed in the first GGR of 1968.

The 1968 GGR had only one finisher – Sir Robin Knox Johnston of UK in the India-built Suhaili. It was the world’s first solo nonstop circumnavigation in a sailboat. Sir Robin completed his journey in 312 days. Compared to this, Van Den Heede and Slats were at their earlier mentioned positions in the North Atlantic by the 194th day (as per GGR website) of the race. Van Den Heede holds the current world record for single-handed westabout circumnavigation. According to information on Wikipedia, the westward route for circumnavigation is harder as it faces the dominant winds and currents. There are fewer attempts in this direction. In 2004, Van Den Heede completed this route in 122 days, 14 hours and three minutes.

(The author, Shyam G Menon, is a freelance journalist based in Mumbai. For more on 2018 GGR please go through the blog’s list of recent posts, explore Sagar Parikrama in the categories section, visit the blog’s archives or simply scroll down to see earlier posts.)