Doug Scott, among the best known British mountaineers of his generation, passed away on December 7, 2020. He was 79 years old. He had been ailing from cancer, BBC said in its report.

Scott was the first Englishman to successfully scale Mt Everest, an ascent – with Dougal Haston in 1975 – that included a harsh bivouac at high altitude, at that time the highest elevation reported for such an incident. Climbing under tough conditions, the pair reached the summit only by late evening and by the time they got to South Summit on the return, their headlamps were dead and their bottled oxygen had run out. They spent the night in the open. In its obituary on Scott, The Guardian noted that Scott did not have his down-filled suit on him; he had left it behind as it was too constricting to climb in. Both mountaineers survived the episode without frostbite and were able to descend to lower camp at first light.

The climbing route Doug Scott put up at Ramagiri betta, Ramanagaram. The photo of the rock face was downloaded from the Internet. It is being used here for representation purpose. No copyright infringement intended. Marking of the topo (climbing route) by Dinesh K.S.

Scott’s tryst with such testing situations would repeat a couple of years later on The Ogre in the Karakorum, where after breaking both his legs while abseiling (on the descent from the summit), he – helped by his teammates – crawled all the way back to base camp in a storm. Wikipedia’s page on Doug Scott says that over the years he was on 40 expeditions to the high mountains of Asia, during which he made some 30 first ascents. His climbs in the Himalaya and elsewhere were noted for their choice of small teams (alpine style). Among mountains in the Indian Himalaya that he climbed successfully were Changabang and Shivling. He also climbed Kanchenjunga which is on the India-Nepal border but essayed the ascent from the Nepal side via the mountain’s north ridge and without using bottled oxygen.

Scott had a following in both mountaineering and rock climbing. He spent time in Yosemite in the US, famed for the giant rock wall: El Capitan, which served as canvas for some of the pioneers of big wall climbing. Along with Austrian climber, Peter Habeler, he made the first European ascent of El Capitan’s Salathe Wall in 1970. Given his climbs in the Himalaya and Karakorum and his standing in the sport, Scott is a much respected figure in Indian climbing circles. He has climbed rock in the Maharashtra Sahyadri and in Karnataka. In Maharashtra, there is a climbing route (it runs along a crack) on the hill fort of Harihar that is named after him; the route is called Scottish Kada. He was an honorary member of the Mumbai-based Himalayan Club. In early 2017 he was in Mumbai to receive the club’s 2016 Kekoo Naoroji Book Award; he won it for his book: Up And About, The Hard Road to Everest. He did charity work in Nepal and held several volunteering positions in the mountaineering community. According to Wikipedia, Scott was diagnosed with inoperable cerebral lymphoma in March 2020. The end came on December 7. Notwithstanding illness, Scott raised thousands of pounds for charity during the recent COVID-19 induced lockdown by climbing up and down his stairs, BBC’s report on his demise said.

From Savan Durga; the climbing route established by Doug Scott is number 4 to the left. The photo of the rock face was downloaded from the Internet. It is being used here for representation purpose. No copyright infringement intended. Marking of topo (climbing route) by Dinesh K. S.

“ Doug Scott was one of the great legends of mountaineering. His climbs were iconic. For his expeditions, he often teamed up with Chris Bonington. He was a great human being too,’’ Harish Kapadia, Editor Emeritus of the Himalayan Journal (published by the Himalayan Club) and India’s best known explorer of the Himalaya, said. He was present at Harihar when Scott climbed there years ago. “ The route was climbed over two days. On the first day, Scott went up to around the half way mark. The next day, he completed it,’’ Harish said about the first ascent of Scottish Kada. He couldn’t recall the exact year but various articles on Scottish Kada available on the Internet, place its first ascent in 1986. In the mid-1980s, Scott also visited Bengaluru and established four to five rock climbing routes in the hills (Ramagiri betta in Ramanagaram and Savan Durga) frequented by local climbers. The routes are challenging and some of them sport Scott’s name, Dinesh K. S, senior climber from the city, said. 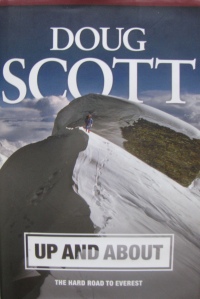 Those from Mumbai who interacted with him, described Scott as a straight talking individual, a strong personality. On his last visit to Mumbai in 2017, Scott visited the hills of Ratangad and Katrabai near Bhandardara. His family joined him on the outing and the idea was for his wife and children to trek to Ratangad while Scott tried some rock climbing on Katrabai. Senior Himalayan Club member, Rajesh Gadgil, who accompanied Scott, recalled that the latter had no hesitation in backing off once he concluded that the proposed route was not in the best state to be climbed. Although among the greats of mountaineering, Scott had no bothersome ego or attitude about him. “ He let you be the master of the domain you knew well and when it came to decisions concerning him, he made them. He was a strong person and believed strongly in the values that mattered to him,’’ Rajesh said. He remembered Scott telling local climbers not to bolt rock indiscriminately for the sake of climbing. The Indian mountaineer met Scott last in April 2018 during a trip to the UK. He visited Scott at his house and had the pleasure of hiking up a hill nearby, with him.

(The author, Shyam G Menon, is a freelance journalist based in Mumbai. For the review of Doug Scott’s book Up And About, The Hard Road to Everest, please click on this link: https://shyamgopan.com/2017/03/07/up-and-about-the-hard-road-to-everest/. For the report on Scott at the 2017 Himalayan Club function in Mumbai, please click on this link: https://shyamgopan.com/2017/02/20/.)