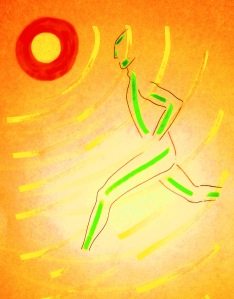 This study posted on the IAAF website required little effort to catch one’s attention, especially after a Mumbai Marathon in warm conditions. It speaks of the 2020 Tokyo Olympics but essentially sensitizes all to the importance of choosing carefully the time frame of an event in times of climate change and where stress by weather is expected, how it may be managed.

On January 21, coincidentally a day after many sweated it out at the annual Mumbai Marathon in warm conditions, the International Association of Athletic Federations (IAAF) hosted on its website the summary of an engaging study meant to be a tool in managing thermal stress at sport events.

The study titled Quantifying Thermal Stress for Sport Events – The Case of the Olympic Games 2020 in Tokyo, pointed out that the upcoming  Olympics sits bang in that period of the year when hot weather prevails strongest in the Japanese capital. The researchers who include Paolo Emilio Adami, manager of IAAF’s Health & Science Department, has emphasized that the intention of the authors is “ not to prove a specific location unsuitable to host a sport event but rather to provide decision makers with a useful methodology to assess the prevailing conditions and take timely action in order to allow for a safe participation for athletes as well as spectators.’’

To put things in perspective, this blog elects to highlight a point the study’s authors have mentioned – large sport events like the Olympics typically happen in the summer months, the reason for which maybe their origin in Europe. In Europe, the summer season affords the largest share of thermally comfortable hours. But then, the whole world is not Europe and the Olympics moves from one location to another.

In the paper’s abstract, the authors have said that it is important for event organizers and medical staff to know whether a competition is happening at a time and place with extreme weather, or in general not appropriate weather and climatic conditions. To determine this, two factors have to be included when establishing the effect of atmospheric conditions on visitors and athletes – climatic conditions based on long term data and quantification of extreme events, like heat waves. The impact of environment on human thermal comfort includes meteorological and non-meteorological factors. Some of the meteorological measures are severely impacted by local environment; within this, the study mentions the capacity of urban environments to generate modifications “ by morphology and the surface properties of various specific elements and their configurations.’’ The latter refers to micro climatic variations urban landscapes can prompt. However the micro climate can also be modified by planning solutions that reduce heat load on humans attending the event.

The study is anchored around a couple of relevant indices. The first – Physiological Equivalent Temperature (PET) is one of the most commonly used indices in the field of human thermal comfort. It is defined as “ the air temperature at which, in a typical indoor setting (without wind and solar radiation), the energy balance of the human body is balanced with the same core and skin temperature as under the complex conditions to be assessed.’’ Like most complex thermal indices, PET is dependent on meteorological input parameters like air temperature, vapor pressure and wind speed as well as information about local radiation fluxes, the paper said. The second index anchoring the research is Modified Physiological Equivalent Temperature (mPET). It is based on classic PET but comprises a multi-mode heat transport model and a self-adapting clothing model. It also contains improved consideration of humidity. For the specific case of Tokyo as venue for 2020 Olympics, the study used meteorological data spanning August 1966 to June 2018 in 3h resolution provided by a meteorological station in the center of Tokyo.

According to the study, the very time of the 2020 Olympics from July 24 to August 9 can be deemed the hottest throughout the year. “ Both PET and mPET indicate increasingly warmer conditions for the time from 24th of July to the 6th of August and slightly cooler conditions on average for the 8th and 9th of August,’’ it said. Hours with PET of 35 degrees Centigrade and above are most frequent in July and August, where they are found between 9 AM and 3 PM. However on the average, even at nighttime, conditions in Tokyo may be perceived as warm in August.

The researchers conclude (based on results) that determining the right period for hosting sport events requires meteorological input data covering a long period of time, “ at least 30 years (as recommended by WMO), in high temporal resolution.’’ Analysis that is based on monthly resolution and average values cannot provide appropriate information.

“ In times of global climate change and urban areas being affected the most, it should be stated that most recent data should be used in order to account for changing frequency and intensity of heat waves and the recent development of the urban canopy influencing the urban heat island effect,’’ the paper said. Thermal stress in terms of heat stress can be reduced by either moving the date of an event or carefully setting the time of day an activity is slated for. The study was focused on visitors originating from Europe. It works for people from other regions with similar thermal climatic conditions. It can be adapted for people from still other regions by using a different assessment scale representative of corresponding climatic conditions.

The study made two other interesting observations:

Readings from a single meteorological station – as in the Tokyo case study – cannot be deemed representative of a whole city or urban area like Japan’s capital. Input parameters for thermal indices as well as the indices themselves are modified significantly by the urban environment and show “ strong variation in short distances of few meters.’’ Provided know-how as well as input data is available, the results can be further improved by considering actual local conditions using a “ building-resolving urban climate model.’’ Second, in terms of vulnerability to thermal stress, the study pointed out that visitors and tourists are more vulnerable than athletes. This is due to the shorter time for acclimatization they typically go with and lack of information on how to counter the effects of heat. Athletes on the other hand, tend to arrive a few days prior to competition allowing for progressive acclimatization with slow increase of exercise load up to the day of competition.

“ To allow for a safe participation in sport events, it is recommended that athletes arrive at the competition at least two weeks prior to the event. When arriving on the site of the event in advance is not possible, acclimatization should take place in an environment with similar climatic conditions to the final destination,’’ the study said.