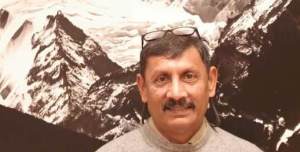 Peter Muir from the Alpine Club of Canada is the new president of the UIAA – International Climbing and Mountaineering Federation.

He is the fourteenth president of climbing’s apex body worldwide and the second person to occupy that position from Canada, a statement available on the website of UIAA said. The elections were held on October 24, 2020; it was the federation’s first ever online general assembly.

Amit Chowdhury of India was elected to the federation’s executive board.

The board is a top body within the organizational structure of UIAA.  “ The Board is elected for a four-year period and consists of the President, Vice-President, Secretary General, Treasurer and currently three other members. Together they carry out the decisions made by the General Assembly, control finances and support both the commissions and office staff,’’ the UIAA website said on the role of the executive board.

Chowdhury is the first Indian to be elected to the executive board. Before his election to the board this year, he was a member of UIAA’s management committee. Earlier still, Colonel H. S Chauhan (he was president of the Indian Mountaineering Foundation [IMF] from 2011-2019) had served a tenure as member of the same committee. Chowdhury is a past vice president (2013-2017) and honorary secretary (2011-2013) of the IMF. Incidentally, he was also a candidate – one of three in the fray – in the October 2020 elections for the post of UIAA president.

According to the earlier mentioned UIAA statement, Muir succeeds Frits Vrijlandt, Royal Dutch Climbing and Mountaineering Club (NKBV), Netherlands as the federation’s president. “ Vrijlandt’s second and, as defined in the UIAA Articles of Association, final four-year term came to an end at this year’s General Assembly,’’ the statement explained.

While Muir was elected the federation’s new president on October 24, the other office bearers of the executive board will be decided at a meeting of October 30, Chowdhury said when contacted. Chowdhury had been serving as chair of UIAA’s safety commission since 2017. With his election to the executive board, he will be relinquishing his position at the safety commission, he said.