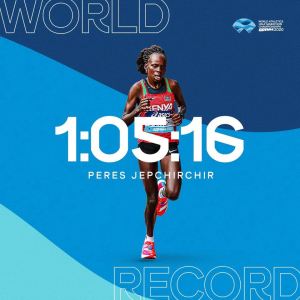 Peres Jepchirchir (This image was downloaded from the Facebook page of World Athletics and is being used here for representation purpose. No copyright infringement intended)

Kenya’s Peres Jepchirchir set a new world in the women only half marathon, sprinting to a close finish in the World Athletics Half Marathon Championships held in Gdynia, Poland on Saturday, October 17, 2020. She clocked 1:05:16. Second place went to Melat Kejeta of Germany, who finished in 1:05:18 (a new women only European record) while Yalemzerf Yehualaw of Ethiopia finished third in 1:05:19 (a personal best).

Notably all three athletes improved upon the previous world record for the category (a report on the website of World Athletics said that the top six women finished in under-66 minutes and the top nine within 67). Plus, as per the race commentary, there were several personal bests in the timings returned by the top 30 finishers. It was only in early September that Jepchirchir had broken the women-only race world record in the half marathon clocking 1:05:34 for the distance in Prague, improving upon the previous record of 1:06:11 set by Netsanet Gudeta of Ethiopia at the World Half Marathon Championships in 2018. Earlier still, at the 2016 edition of the World Athletics Half Marathon Championships in Cardiff, UK, she had set a then world record of 1:07:31.

In the men’s half marathon in Gdynia, Uganda got its first individual medal at the event as 19 year-old Jacob Kiplimo provided a progressively fast finish to an initially slow race, covering the distance comfortably in 58:49. It was a new championship record and a national record for Uganda. Second place went to Kenya’s Kibiwott Kandie (58:54); Ethiopia’s Amedework Walelegn (59:08) finished third. Uganda’s Joshua Cheptegei (59:21), on whom the pre-race arc lights had focused, finished fourth in his maiden half marathon. According to the race report by World Athletics, the first ten runners finished within 60 minutes, a first for the event and only the second time it has ever happened.

The women’s half marathon was a fast race, surprising given what was initially expected from the course specially designed for a half marathon amid pandemic. The event was rescheduled from its original date in March and the course – a five kilometer-loop – was adapted to ensure any potential risks are kept to a minimum. “ The course takes in some of the main roads in the city center with a slight uphill section along Swietojanska Street, then the final stretch heads back down towards the sea with the finish line located on the main city beach in Gdynia,’’ a write-up dated October 13, 2020, available on the website of World Athletics, said. It wasn’t a flat, fast course all through; the type preferred for record breaking attempts. According to the race commentators, it had seven corners including a brief but slightly sharp downhill and a U-turn. Saturday’s timings in the women’s half marathon were despite this. On the other hand, weather conditions were very good.

It was also a race fraught with incidents. Very early itself a block of 10-12 runners, mostly from East Africa, shot off to be lead pack by a significant margin. The first five kilometers went by in 15:20; it was the first hint of likely world record breaking performance. Setting the pace at this stage was Kenya’s Joyciline Jepkosgei. By 18:00 the first of the casualties caused by the blistering pace manifested with an Ethiopian runner coming lose off the pack and trailing. At 26:00, there were three Ethiopian runners tucked comfortably into the lead pack running at the shoulders of the Kenyans setting the pace. Notwithstanding the sizable gap between the leaders and the rest, there was active running right through the ranks for there were team positions at stake. At around 28:50, at the sharp corner at the base of the slightly steep downhill, the first incident occurred in the lead pack – defending champion Netsanet Gudeta seemed to skid slightly; she fell down. She picked herself up quickly and continued running but given the pace, a significant gap had already opened up between her and the lead pack. For her, it was race lost, right there. At the 2018 edition of the event, she had won in world record time of 1:06:11.

At about 40:01, Peres Jepchirchir of Kenya began to accelerate. At 48:00, the lead runners entered the final lap. Around 50:15, the Ethiopians, who had been running efficiently at the shoulders of the Kenyans, appeared to move ahead; they formed two of the three runners (the other being Kenyan) forming the front wall of the lead pack. The strongest runner at this stage seemed to be Ababel Yeshaneh of Ethiopia. At around 54:00, amid the bunching of runners in the lead pack, Yeshaneh and Jepkosgei came too close to each other; they stumbled and went down. At 1:00:00, it was Kenya’s Jepchirchir and Yalemzerf Yehualaw of Ethiopia who were running stride for stride up front, closely followed by Kejeta of Germany. It was a tight trio with Yehualaw looking strong. At roughly 1:05:00, Jepchirchir surged past the Ethiopian runner who later suffered a minor stumble some 50 meters from the finish line costing her the second spot. The final race results played out as mentioned earlier. 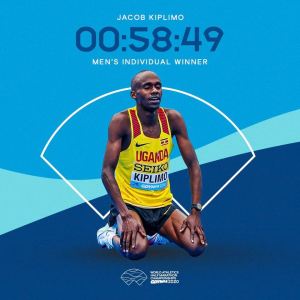 Jacob Kiplimo (This image was downloaded from the Facebook page of World Athletics and is being used here for representation purpose. No copyright infringement intended)

Unlike the women’s race, the men’s half marathon took time to gather pace. For much of the first half of the race, the lead pack was relatively big and separated from the rest of the runners by a series of not-so-significant gaps. The slow pace of this stage (puzzling given how fast the women had run and weather conditions continued to be good) was theorized to potentially favor a top notch track athlete like Cheptegei, who had come to the event after a couple of record breaking performances. Although this was his first appearance at a half marathon, in his training for the event, he had put in distances of up to 35 kilometers. Around 29:00 Cheptegei began to slowly pull ahead. But till 35:10, it was an unclear lead as at various points Cheptegei, Andamlak Belihu of Ethiopia, Kiplimo and South Africa’s Stephen Mokoka exchanged leads. By around 38:24, as Kandie took the lead, Cheptegei had slipped to tenth position although with bridgeable gap to the front. However at around 44:20, even as he had moved up to third place the runners in front were increasing the gap to levels where the commentators wondered whether the race was slowly slipping away from Cheptegei. The second half of the race was quite fast. By 45:24, Kiplimo had taken the lead and having settled into that slot (he lost it temporarily by a slender margin to Kandei at around 52:30), proceeded to steadily crank up the pace. Eventually, Walelegn too got past Cheptegei, producing the final results as they played out.

The event featured ranking by team as well. “ Team results are decided by the aggregate of times recorded by the first three finishers of each team. The team with the fastest aggregate time will be judged the winner,’’ the write-up dated October 13, on the website of World Athletics, said. According to it prizes would be awarded to the top six individuals and the top six teams in both races. “ A US$50,000 bonus will be awarded to any athlete who breaks a world record,’’ the write-up said. In Gdynia, the top teams from the men’s category were Kenya, Ethiopia and Uganda in that order. On the women’s side, the final pecking order was Ethiopia, Kenya and Germany. Starting August 2020, despite the impact of pandemic and lockdown on training and events, there has been a spate of new world records in distance running. Disciplines which witnessed such performances include the men’s 5000 meters and 10,000 meters, women’s 5000 meters, one hour-run for both genders and the women only half marathon, 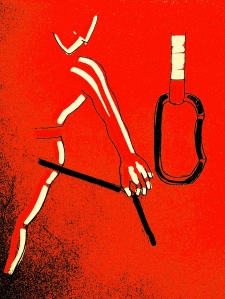 On October 8, 2020, well-known free soloist Alex Honnold highlighted the need for action on the subject of climate change in an article published in Climbing. He begins the piece by pointing out how he spent half a dozen years imagining his project to climb the massive rock face of El Capitan in Yosemite, alone and with no ropes. After prolonged contemplation, he realized that the climb wouldn’t happen unless there was concrete action from his side.

“ I see a real parallel to climate change. It’s the apex issue facing our generation—an issue that feels too big and too complex to act on. It’s all encompassing, impacting almost every other environmental issue that we currently face. And it’s incredibly urgent, with most scientists agreeing that as a global community we only have until 2030 to make meaningful changes before the worst effects of warming are permanently baked into our future. The scope of the problem is frightening, and the sense of dread that accompanies it can easily lead to apathy. That’s why I spent six years thinking about soloing El Cap, but not doing it—it seemed entirely too scary to act. But that lack of action didn’t serve me. Ultimately, I had to overcome my fear and start making concrete steps towards my goal,’’ Honnold writes in the piece, which argues against continued extraction of fossil fuels.

According to him, “ corporate interests have essentially privatized the profits of fossil fuel extraction while socializing the cost of pollution. These barriers can make it feel as though change isn’t possible on the individual level.’’ Further even as individual actions (travel less, eat less meat, have fewer kids, and vote) matters, the pressing need is to address fossil fuel extraction. Honnold argues that decreasing the funding for dirty technologies is the best way out. To this end he suggests that everyone choose their bank carefully. Banks loan the bulk of the capital they raise and within that world, lending for fossil fuel extraction has grown significantly after the 2016 Paris Agreement (on measures to control climate change). “ Being deliberate and choosing a sustainable bank is key,’’ he writes. To read the full article please click on this link: https://www.climbing.com/news/alex-honnold-climate-change-is-urgent-we-need-to-decrease-extraction-now/

Roughly a week after Honnold’s piece appeared, on October 14, 2020, another well-known climber Tommy Caldwell, published an article on climate change and the need for urgent action. Writing in Rock and Ice, he couched his arguments in the reality of climbing in the western United States, where ongoing climate change has annually sparked huge forest fires.  “ Right now, the American West is blanketed in smoke from forest fires, a direct result of our changing climate. Fire season is now longer and more intense. In years past, I’ve been evacuated from my home in Colorado twice due to the threat of fire. As a climber, I spend a lot of time hanging off granite walls from Yosemite to the Rockies. It’s from those unique vantage points that I’ve gained perspective on what’s happening to our climate,’’ Caldwell says, adding “ I’ve seen an increase in dangerous rockfall attributed to warming temperatures and I’ve watched as wintertime climbing routes disappear completely due to snowmelt. Ouray, Colorado, one of the most famous ice-climbing spots in America, is rapidly losing ice, which could render ice climbing there a thing of the past.’’

Caldwell appeared clear that change won’t happen unless the right people are voted to power. “ My kids, who are four and seven, are in for a much tougher world. I’m trying to do everything I can to prepare them but also to minimize the harshness that could become their reality,’’ Caldwell says. To read this article in full, please click on this link: https://rockandice.com/climbing-news/tommy-caldwell-trump-is-going-to-ruin-rock-climbing/