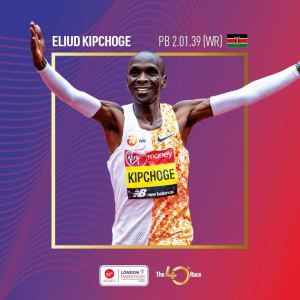 Eliud Kipchoge. This photo was downloaded from the Facebook page of London Marathon and is being used here for representation purpose. No copyright infringement intended.

Although scaled down to an elites only affair, this year’s London Marathon, due October 4, promises engaging action as it pits the world’s fastest marathon runner, Eliud Kipchoge of Kenya against the second fastest, Kenenisa Bekele of Ethiopia and a host of other top runners. In the women’s race, world record holder, Brigid Kosgei of Kenya will be participating.

On September 29, The Guardian reported that race director, Hugh Brasher, believed records may fall on the fast course selected for the 2020 London Marathon provided weather stayed supportive. According to the report, all Kenyan and Ethiopian runners arrived for the race cleared COVID-19 tests, save a runner (Degitu Azimeraw) and a coach (Haji Adilo) – both from Ethiopia – who tested positive before boarding the flight to London. There are COVID-19 tests before athlete leaves his / her country, tests before checking into the hotel in London and tests ahead of actual race. 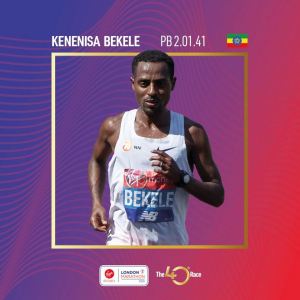 Kenenisa Bekele. This photo was downloaded from the Facebook page of London Marathon and is being used here for representation purpose. No copyright infringement intended.

This year’s edition of London Marathon, originally scheduled to be held on April 26, 2020, was postponed to October 4, 2020 due to the COVID-19 pandemic. Later, it was changed to an elites-only race. London Marathon is the second event to be held this year from the clutch of races constituting the World Marathon Majors. In March, the Tokyo Marathon was held as an elites-only race. The London Marathon course will also be markedly different this time with runners racing along a contained course around St. James Park. Participants will do 19.6 laps of this loop.

For the large number of amateur athletes who had signed up for the event, this year’s London Marathon will be accessible as a virtual event. Participants of the virtual 2020 Virgin Money London Marathon have 23 hours, 59 minutes and 59 seconds to complete their marathon. They will have to enter their race details on the official race app, London Marathon said on its website. 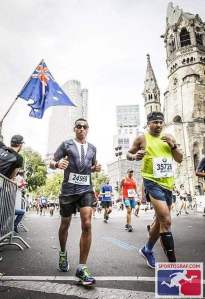 In India, runners registered for the virtual London Marathon will be running in their own cities in small contained loops as lockdown norms still prevent any gathering of people.

In Bengaluru, Bhadresh Shivashankar will be running the virtual London Marathon at Hesaraghata, on the outskirts of the city. Bhadresh was on course to do the six World Marathon Majors having already run Berlin Marathon in 2018 and Chicago Marathon in 2019. This year, he had registered for London Marathon. Following outbreak of COVID-19 worldwide, he joined the ranks of those running the event’s virtual format. Bhadresh has been running for over 15 years now. Beset with health issues, he took to running when he was working in Dubai. Over the years, he has participated in many races of varying distances, including several marathons. 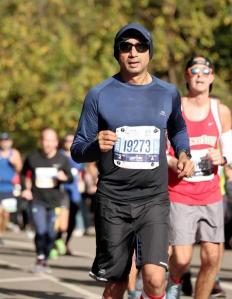 “ On Sunday, I will be running on a loop of 15 kilometers at Hesaraghata. Support will be provided by the marathon training group, Pacemakers and Active Holidays, a travel company that organizes trips to run marathons,” he said.

Harish Vasista, also from Bengaluru, will be running the virtual London Marathon at the same venue as Bhadresh. Training with Pacemakers, Harish has been following his coach K.C. Kothandapani’s customized training plan. “ My training for the virtual run has been good although I could have done better,” he said. Harish too was on course to do the six World Marathon Majors, having already done New York City Marathon and Berlin Marathon. This year, he was to do London Marathon and Chicago Marathon. While London Marathon was postponed and later changed to the virtual format, Chicago Marathon’s 2020 edition has been cancelled. “ I plan to start at a slow pace for the first 20-22 kilometers. Depending on how I feel, I will step up my pace for the rest of the run,” he said. Weather in Bengaluru has been quite good these past few days. 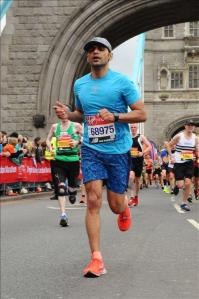 In Mumbai, recreational runner Himanshu Sareen will be running the virtual London Marathon barely a fortnight after he ran the virtual Boston Marathon.  He plans to run along the same route that he chose for Boston Marathon, a route close to his place of residence. Each virtual marathon appears to have its own unique approach to overall rules. The virtual Boston Marathon held over September 5 – 14 was amenable to the use of treadmill. The virtual London Marathon is not. Himanshu had initially thought of running 30 kilometers outside and 12 kilometers on the treadmill at home. He had arranged for a foot pod to ensure seamless transition. A foot pod is a device that is tied to the foot and is very accurate in measurement while running indoors as well as outdoors. He has since abandoned the plan and decided to keep his run fully outdoors. 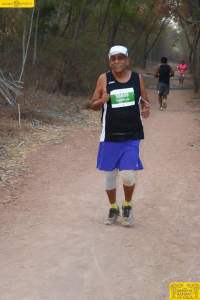 Kamalaksha Rao, also from Mumbai, will be attempting his virtual London Marathon on a route close to his place of stay. “ I will be carrying water and some nutrition bars. There are shops along the route. I can buy water from these shops to replenish my supplies,” the septuagenarian said. Kamalaksha will be running at a very slow pace as roughly two and a half months earlier, in July, he had come down with COVID-19. Both Kamalaskha and Himanshu hadn’t originally registered for the London Marathon. They registered later for the virtual format. The virtual version of major running events has been finding acceptance in India. Amidst lockdown blues and life that continues to be hemmed in by COVID-19, it has provided goals that runners can focus on. Not to mention – in their own small way, amateur runners deprived the ambiance of running events by the pandemic, tweak these virtual events to create a microcosm of enjoyable event. During the virtual Boston Marathon for example, running groups in India had created special loops, banners and finishing tape, provided hydration support and even some cheering – all this with safety protocols in place.

A backdrop of inspiring performances despite virus hit-world 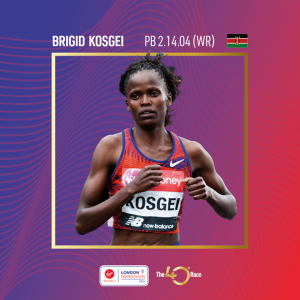 Brigid Kosgei (This photo was downloaded from the Facebook page of London Marathon and is being used here for representation purpose. No copyright infringement intended)

This year’s London Marathon is happening against the backdrop of an unexpected improvement in distance running by some elite athletes despite circumstances still plagued by COVID-19. The spread of COVID-19 worldwide, the lockdown it caused and the way in which it upset athletes’ training plans (not to mention, how the pandemic caused the 2020 Olympic Games to be postponed) were expected to impact athletic performance. While that may be the general trend, on August 14, Joshua Cheptegei of Uganda stunned the world when he scripted a new world record in the 5000 meters on track. Later, over September 4 – 5, three world records tumbled. Elite runners, Mo Farah of UK and Sifan Hassan of Netherlands set one hour-world records in their respective gender categories while Peres Jepchirchir of Kenya broke the “ women-only race world record in the half marathon.’’ 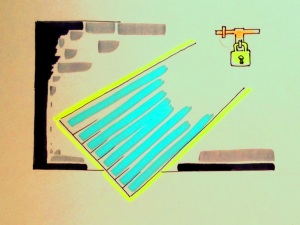 Notwithstanding the central government’s recommendation, the final decision will be by the state governments

The central government has allowed select swimming pools to reopen as part of the phased relaxation of lockdown in India, the media reported on September 30, 2020.

This would be as part of Unlock 5, effective from October 1 and the reference to pools has been qualified as those used to train “ sportspersons.” It has been interpreted in swimming circles as meaning competition swimmers.

In its report on Unlock 5, the Hindustan Times wrote,“   Swimming pools being used for training of sportspersons will be permitted to open, for which the standard operating procedure (SOP) will be issued by Ministry of Youth Affairs & Sports (MoYA&S).” Notwithstanding the relaxation of lockdown norms by the central government, given the continued growth of COVID-19 infections, the final decision at ground level will be taken by the state authorities concerned.

In the world of sports, the lockdown to contain the spread of COVID-19, first enforced in late March, had been felt most severely in swimming. While other endurance sports like running and cycling progressively regained a semblance of activity at both amateur and elite levels (races and events are still not permitted) with every move to relax lockdown, swimming continued inaccessible as pools remained shut. This had naturally put pressure on elite swimmers for who, every day of training lost, makes it that much harder to recoup their form and ranking in competition.

The inclusion of swimming pools meant for training “ sportspersons” in the latest unlock guidelines from the center, is the first green signal to swimming in a long while. But as mentioned, the final decision even with regard to reopening facilities for competition swimmers will be that of the state government. In Maharashtra for instance, the state’s Unlock 5 guidelines (announced September 30) continues to have swimming pools in the banned category. At the time of writing, there was no mention yet of local exemptions in line with the central government’s recommendation.