“ The runners of the Berlin Marathon 2019 should expect a wet track. The forecast for Sunday sees a few hours of rain for Berlin. On Saturday it will be partly cloudy, partly sunny. However, thunderstorms are expected from Saturday afternoon on. Meteorologists therefore give the athletes in the capital little hope for a finish in dry conditions on Marathon Sunday (29 September 2019). According to Deutscher Wetterdienst (DWD), it will be wet and cloudy. At first the meteorologists expect rain only in the northern half of Brandenburg, but in the course of the day the rain will spread to the south. The maximum temperature will be 21 degrees Celsius.’’ – This was the weather forecast for the 2019 Berlin Marathon as provided on the website berlin.de two days ahead of the event.

On Marathon Sunday Ethiopian running great Keninisa Bekele created history in Berlin. He ran the second fastest marathon on record, covering the distance in two hours, one minute and 41 seconds, a timing that was off the world record by just two seconds.  Ashete Bekere of Ethiopia won the women’s race; she completed in 2:20:14. It was also occasion for the winner of the first women’s marathon at an Olympic Games (1984, Los Angeles) to rejoice afresh. Sixty two year-old Joan Benoit Samuelson of the US, completed the 2019 Berlin Marathon in 3:02:21 breaking the World Masters Association record for the 60-64 years age category, news reports said. Berlin’s weather wasn’t comfortable and supportive for all. Among the runners from India that day in Berlin was Anjali Saraogi. She texted in that the temperature was alright but the rain bothered. “ I was feeling very cold and was shivering. The rain was terrible. But the volunteers were out braving the brutal weather and supporting us. Immense respect for that. The course was easy, that’s why we could all run in that rain,” she wrote.

Almost 5000 kilometers away it was a different thermal experience for race-walkers and marathoners at the 2019 IAAF World Athletics Championships as they battled the heat and humidity of Doha, Qatar. On Wikipedia, the average high temperature in September for Qatar is 39 degrees Celsius; the average low, 29 degrees. During the 2019 world championships, outdoor endurance events like the marathon and race-walk, were scheduled for midnight to escape the weather conditions. It was a first for the world championships. Aside from training to run in warm weather, athletes have to reset their wakefulness to coincide with night hours. 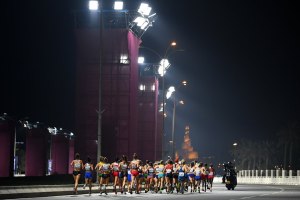 Midnight, September 27-28; the women’s marathon underway in Doha (This photo was downloaded from the Facebook page of IAAF and is being used here for representation purpose. No copyright infringement intended)

In the women’s marathon held in the intervening night of September 27-28, only 40 runners from the 68 who started the race, finished. The timing was slow. Ruth Chepngetich of Kenya was the winner; she covered the distance in 2:32:43, significantly slower than her personal best of 2:17:08 or for that matter, the winning time for women at the 2019 Berlin Marathon. According to IAAF reports, the race had begun in temperatures of 31-32 degrees and humidity of 73 per cent.  From the women’s marathon, a memorable photograph was that of a bunch of elite runners who quit midway, making it to the finish line in a golf cart. Some of the others who withdrew were stretchered off and at least one athlete spent some time under medical observation. “ Amid the havoc, Kenya’s Ruth Chepngetich emerged triumphant, claiming gold in two hours, 32 minutes and 43 seconds – the slowest ever World Championships winning time and more than 15 minutes slower than her personal best. The winner then collapsed some time after the race while talking to the media,” a report in UK-based publication The Telegraph, said. While deciding to proceed with the marathon, the authorities had backed it up with precautionary measures and support services matching the weather conditions. They followed the book. In January 2019, the IAAF itself had highlighted the issue of thermal stress, hosting on their website information about a study done ahead of the 2020 Tokyo Olympics and discussing the need for organizers of any sport event to have suitable protocols in place (https://shyamgopan.com/2019/01/25/spotlight-on-thermal-stress-impact-on-sport-events/).

Some of Doha’s race-walks were also slated to be held the same weekend as its women’s marathon. At a media interaction ahead of the 50 km race-walk; world record holder in the discipline, Yohann Diniz of France, minced no words in describing the weather conditions. In particular, he highlighted the contrast between the ambiance within the main stadium and the warm conditions outside. Within the stadium it was 24-25 degrees Celsius. His sport as well as the marathon, is held outside. The walkers had been taken for “ idiots,’’ the 41 year-old Frenchman was quoted as saying by the website france24.com. In the early hours of Sunday – the same Sunday that was Marathon Sunday in Berlin – Diniz was among those who didn’t finish the 50 kilometer-walk. It was won by Japan’s Yusuke Suzuki (the first world title for Japan in 50km race-walking; Suzuki is the world record holder in 20km race-walk) who told the media afterwards that he “ was just desperate to finish.’’ It was a relief to get it over with. Numbers don’t lie and as in the women’s marathon, the timing from the men’s 50km race-walk speaks for itself. Suzuki crossed the finish line in 4:04:20. Diniz’s world record, established in 2014 in Zurich, is 3:23:33. In the women’s 50km race-walk, the winning time for China’s Liang Rui was 4:23:26; the world record set by Liu Hong earlier in 2019 is 3:59:15. In the women’s 20km race-walk wherein China swept the podium, Liu Hong won in 1:32:54. The current world record held by Elena Lashmanova of Russia is 1:23:39.  There were those, who reacted differently too. After winning silver in the 50km race-walk for women, China’s Mocou Li told the IAAF’s official channel (she spoke through a translator), “ I am not so tired. But I feel that I cannot speed up; maybe because of the weather. This is not the worst of conditions for me. I feel relaxed today.’’ 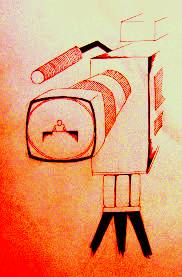 Television coverage of the 2019 IAAF World Athletics Championships has been spectacular. Technology made the coverage rich in terms of data, details and camera angles. You could conclude – even if athlete in one’s living room is mere pixels on screen, it made more sense to watch the world championships on television than in the stadium, where you wouldn’t get to see the action this close. The bulk of the telecast was around disciplines taking place in the main stadium. Technology works best in contained environments; containment is also part of the emergent business architecture of sport and media properties. The IAAF had informed well ahead that the media-technology mix in Doha would set new benchmarks. There were complaints too. Some athletes found the new block cameras (cameras attached to the starting block in sprint events) intrusive and unethical. On September 30, CNN reported that the IAAF had decided to restrict the use of images from these cameras after the German Athletics Federation highlighted the issue. Amid the emphasis on telecast, media reports said that the number of spectators at the stadium fell as opening weekend gave way to working week. Plenty of empty seats showed up on TV screens worldwide. Famous athletes had only family, friends and a modest clutch of spectators applauding them in the stadium. Questions were raised in social media on why the biennial athletics championship traveled to Doha.

According to published reports, the organizers then promised to make an effort to get more people in but pointed out alongside that a made-for-television schedule of events meant few wanted to stay that late into the night in the stadium. By Day 4 as endurance disciplines like the men’s 5000 meters final and the women’s steeplechase final got underway, there was a sizable presence of East African supporters in the stadium, to cheer. The atmosphere was festive. The Ethiopians; the Kenyans, the Ugandans – they got to celebrate their victory. Daniel Stahl of Sweden broke into a run and jumped over a hurdle as he celebrated his triumph in the men’s discus throw.  Mariya Lasitskene competing as an authorized neutral athlete and crowned world champion for the third time in the women’s high jump did a victory lap. For those looking at it all as panoramic story, it was also moment to reflect about weekend gone by. The strong performances and cheering within the stadium were a contrast to the struggles and timings reported in endurance sports staged outside.