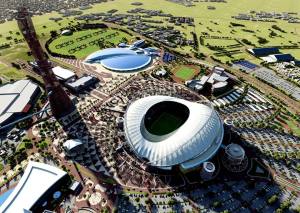 This photo was downloaded from the Facebook page of the Doha World Championships and is being used here for representation purpose. No copyright infringement intended.

Six championship records were set, 43 countries won medals and athletes from 68 different nations achieved at least one top-eight placing at the just concluded 2019 IAAF World Athletics Championships in Doha.  There were 21 area records – double the number from 2017 – and 86 national records.

Athletes from more than 200 countries participated in the Doha edition.

Based on the IAAF competition performance rankings used to rank the quality of competitions, the IAAF World Athletics Championships Doha 2019 tops the list of all World Championships to date, an official statement from IAAF said.

USA’s 200m winner Noah Lyles and Germany’s decathlon victor Niklas Kaul became the youngest ever world champions in their respective events. Ukraine’s Yaroslava Mahuchikh twice broke the world U20 record on her way to the silver medal in the high jump. She was one of several athletes born in or after the year 2000 who earned medals, along with Ethiopian duo Selemon Barega and Lemecha Girma and Bahrain’s Musa Isah, the statement said. IAAF President Sebastian Coe has described the Doha edition of the world championships as the best ever in the series in terms of the quality and depth of performance produced by the athletes.

This blog would like to point out that while several sterling performances were seen in Doha, almost all of them happened within the main stadium. As per published news reports, the disciplines staged outside the stadium – mainly marathon and race-walking – reported impact of heat and humidity to varying degrees.

(The author, Shyam G Menon, is a freelance journalist based in Mumbai. Please click on this link for a related article: https://shyamgopan.com/2019/10/01/two-worlds/)