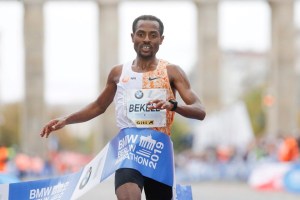 Kenenisa Bekele (This photo was downloaded from the Facebook page of Berlin Marathon and is being used here for representation purpose. No copyright infringement intended)

On Sunday (September 29, 2019) Bekele, 37, covered the course at Berlin – rated the fastest among the World Marathon Majors – in two hours, one minute and 41 seconds, just two seconds shy of the world record. Kenyan legend Eluid Kipchoge had set the current world record at the same event last year with a timing of 2:01:39.

Birhanu Legese finished behind Bekele in 2:02:48 while fellow countryman Sisay Lemma finished in 2:03:36 hours. In the women’s race, Ashete Bekere was followed by Mare Dibaba who finished in 2:20:21. Sally Chepyego of Kenya finished in third place with a timing of 2:21:06.

Bekele’s run was the second fastest to date in the history of the marathon.

“ I am very sorry. I am not lucky. But I still can do this. I don’t give up,’’ BBC quoted Bekele as saying in its report on the event.

His previous best in the marathon was 2:03:03, clocked while winning the 2016 edition of the Berlin Marathon. The winning performance at the same event on Sunday comes on the back of mixed fortunes since 2017. He dropped out of the 2017 Dubai Marathon past the halfway mark; he finished second at the 2017 London Marathon, sixth at the 2018 London Marathon and dropped out about a mile from the finish at the 2018 Amsterdam Marathon. In February 2019, he had withdrawn from the year’s Tokyo Marathon due to a stress fracture that was taking time to heal.

One of the all-time greats of distance running and much respected for his running form, Bekele holds the current world and Olympic records in the 5000m and 10,000m. According to Wikipedia, he is the most successful runner in the history of the IAAF World Cross Country Championships with six long course (12km) and five short course (4km) titles. At the 2009 IAAF World Championships held in Berlin, he became the first man to win both 5000m and 10,000m at the same championships.