Forty climbers – 20 each in men and women – have qualified for the semifinals of the 2016 IFSC World Cup in bouldering being held in Navi Mumbai. There were no major upsets. The top three in the qualifying round for men were Jeremy Bonder (France), Jongwon Chon (Korea) and Kokoro Fujii (Japan); in the women’s segment the top three were Melissa Le Neve (France), Akiyo Noguchi (Japan) and Miho Nonaka (Japan). As many as eight Japanese climbers made it to the semifinals in the men’s section. Iran, Russia and Germany had two climbers each in the semis while France, Korea, Slovakia, Canada, Czech Republic and Austria had one climber each. Of the 20 women climbers who moved up to the semis, five were from Japan, four from Austria, three from France, two each from Great Britain and Canada and one each from Chinese Taipei, Korea, USA and Germany. The semifinals and finals will be held on May 15. Saturday is a working day for many. Despite this, the opening day of the World Cup was attended by a good number of people. Please find below some photographs from Day 1: 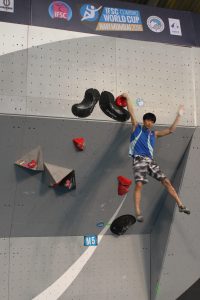 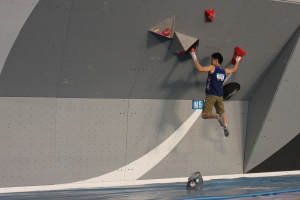 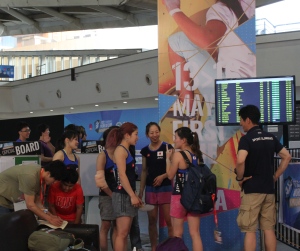 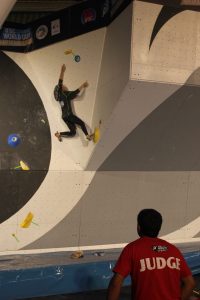 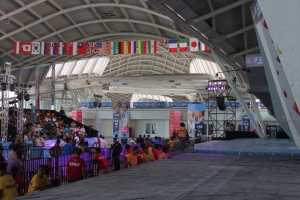 (The author, Shyam G Menon, is a freelance journalist based in Mumbai. All the photos used in this article were taken by him. He would like to thank Pravin Shinde for allowing the use of his camera for the days of the World Cup.)