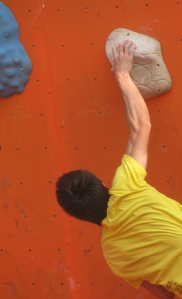 From the 2014 edition of Girivihar’s annual climbing competition, the series that paved the way for a World Cup in bouldering in India (Photo: Shyam G Menon)

Updates from May 13, the eve of the IFSC World Cup in bouldering at Navi Mumbai, will be appended suitably to the article titled `IFSC World Cup: Countdown Begins in Navi Mumbai,’ posted earlier. Please visit this article and that, for a comprehensive overview.

“ All we need is a watch painted on that hold and it would be like Salvador Dali’s painting,’’ I told Prashant.

We sat on the stands, two fans of climbing observing route setters at work on a climbing wall.

If earlier in this blog I called their work, art, it is for a valid reason. A climbing wall; sculpted and painted imaginatively and sporting colorful holds and features, resembles abstract art. Tad, like an Alexander Calder piece, albeit frozen still, stuck to a surface. A climber weaving his way up, adds mobility to the installation effect. The route setter’s intervention is where competition climbing on artificial walls, makes the transition from the cold nuts and bolts of the wall’s engineering, to the art of its facade. In some ways, it encapsulates the peculiar attraction climbing offers – it is math and art at once, it is disciplined training and intuition, it is straight lines and fluidity. It is time, for India’s first World Cup in bouldering; 82 athletes have registered (17 from India, the rest from overseas), the competition commences in Navi Mumbai tomorrow, May 14.

The last couple of days in the run up to the World Cup were a bit tense.

The most critical piece of hardware at a climbing competition is the wall. The marine container bearing one of the walls for the World Cup – a bouldering wall dispatched by one of the biggest names worldwide in the business of climbing walls, shipped in from their facility in China – was brought straight to the venue from the port. Much was expected from this imported wall. Made by an experienced company it was to be benchmark. Upon assembling however, challenges cropped up. There were issues with aligning the wall to the stage, there were mismatched components and some nuts and bolts had not been included in the shipment. After a year spent preparing for the World Cup, this was a disappointing moment for all. It cast a pall of gloom at the venue. But not for long. The manufacturer’s technician and event organizers put their heads together and came up with an optimal solution. The mismatched portions of the modular wall were rectified locally. The team of climbers entrusted with installing the two walls, got cracking. They got the wall’s base aligned. The installation of frames and panels started. Issues with fit and finish emerged. Raju, the carpenter who has regularly contributed to Girivihar’s walls, was recruited to assist with some of the panels. Eventually the imported wall was up. The lengthy process delayed the wall becoming available for the route setters to work on it. By noon May 11, the route setters, having already done much work on the locally fabricated wall which was in place earlier, commenced their work on the imported wall, designing climbing routes the moment a face was ready. By late evening May 12, the imported wall hummed with route setters’ activity. DJ and music system had arrived at the venue; music fueled the route setters’ work and Prashant was lost in his favorite song playing on the big speakers – Metallica’s Nothing Else Matters.

Christophe Billon, IFSC’s Technical Director for the World Cup, is the person who has final say on competition proceedings. I asked him what he thought of the two walls. To begin with he pointed me to the fact that the two subjects in focus were bouldering walls, which, unlike lead climbing walls, don’t go up very high. That makes challenges in design and fabrication easier to handle. He couldn’t immediately recall previous instances wherein the IFSC had gone along with a locally fabricated wall for a World Cup. Navi Mumbai that way appeared to be treading less visited terrain if not breaking new ground. Although he had asked for a couple of changes here and there, on the whole, he felt that the locally fabricated wall was stable and well built. “ Its fit and finish is good,’’ he said. The imported wall, he conceded, had ended up a bit of a disappointment. But the silver lining is that the two walls are so different in shape and character that taken together, a rich variety of climbing routes to challenge the athletes is possible. “ In combination, the two walls work well,’’ he said.

The Navi Mumbai edition of the IFSC World Cup in bouldering is the first World Cup being held in India. The World Cup in climbing is a series of competitions held annually in various countries, under the aegis of the International Federation of Sport Climbing (IFSC). Each edition culminates in podium finishes with points accumulated to crown overall winners by the end of every series. The Navi Mumbai edition, organized by the Indian Mountaineering Foundation (IMF) and Girivihar, falls close to the middle of the series currently underway. In trends so far this World Cup-season, the women’s field has been dominated by Shauna Coxsey of Great Britain, who with her last win at Chongqing in China, has notched up an incredible four straight wins. Although she is at present leader by a sizable margin, there are strong, experienced climbers like Akiyo Noguchi of Japan in the field. With only less than half the journey done so far, much can change going ahead. In contrast, the men’s segment appears filled with closely matched competitors; consequently, it has been a see-saw battle in the run up to Navi Mumbai. Although a host country in 2016, sport climbing has a relatively recent history in India. The 17-member Indian team at the Navi Mumbai World Cup includes some of the best young climbers in the country.

The wall that was locally fabricated for the World Cup, painted and ready for the route setters to begin their work (Photo: Shyam G Menon)

While IMF is the host federation, the work at ground level has been done by Girivihar, Mumbai’s oldest mountaineering club. CIDCO, the agency which designed and built Navi Mumbai, extended their Exhibition Centre in Vashi as venue for the World Cup. There were many challenges along the way, the most consistent of which was perhaps, funding. To address the resource crunch, one of the climbing walls was locally fabricated to IFSC standards. A round of crowd funding was done. In the final stretch of preparations, Tata Trusts stepped in with a financial grant. That was oxygen. From the confines of a hot, sweaty warehouse in Taloja, the locally made wall traveled in dismantled form to the venue in Vashi and was put together at site. Painted and with route setters working on it fixing colorful holds and features, it looked every bit the art work, climbing walls remind of. Two evenings later, the imported wall joined in, providing company.

It’s time for the athlete’s art.