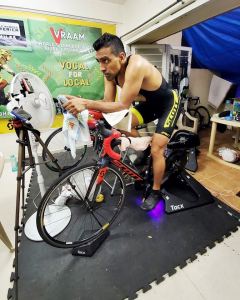 Hirokazu Suzuki of Japan is first to the finish line

Indian cyclist Lt Col Bharat Pannu was placed third on the leaderboard at the close of the Virtual Race Across America (VRAAM), at 11PM Sydney Eastern Standard Time, June 28. He logged 4086.28 kilometers.

“ After 12 days of hard work, day in and day out, WE DID IT. Successfully finished vRAAM with a total mileage of 4086km! According to the provisional leaderboard – WE MADE IT TO THE PODIUM! Kudos to all the other riders and crew. vRAAM is a race to remember,” an update on Bharat’s Facebook page said. It is understood that official confirmation of race result is awaited.

The event’s Facebook page announced Hirokazu Suzuki of Japan as provisional winner. “ The overall provisional winner who completed the full 4542km course is Hirokazu Suzuki,” the page said. Suzuki cycled 4539.80km in 11 days, 23 hours and two minutes, the leaderboard showed. His time of finishing was given as 17:33 hours, June 28. In second place on the leaderboard was putters29 from the UK. He had covered 4148.40km by race’s close.

At the time of writing, the VRAAM leaderboard was yet to formally specify the time taken to cover whatever distance they did, for riders other than Suzuki. “ All results will be provisional until verified by FulGaz and VRAAM,” the race organizers had said on June 25, while disclosing revised race rules that set the distance for being a finisher at 3248km. Cyclists have attributed the revision of race rules to the event being tougher than expected thanks to increases effected in cumulative elevation gain, probably to compensate for the otherwise contained nature of cycling on a home trainer with required support at hand. According to the revised rules, the winner is “ the competitor who has ridden the farthest distance by the end of the race.’’

Hirokazu Suzuki has participated in RAW and RAAM before (RAW – Race Across the West – is a race over a shorter distance built into RAAM). In an interview with Suzuki during his VRAAM attempt, available on the YouTube channel of ohioraamshow.com, the Japanese cyclist said that riding a trainer for this many days is harder than riding outside. Asked whether he planned to participate in the next edition of RAAM, Suzuki said it would depend on his ability to put together the required budget. The record for the fastest time to finish in the physical format of RAAM is held by Austrian ultra-cyclist Christoph Strasser. In 2014 he covered the race’s 4860km-route in seven days, 15 hours, 56 minutes. Strasser has won RAAM six times. 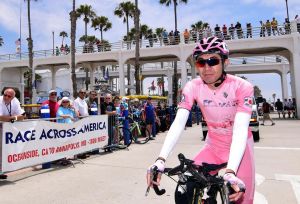 Hirokazu Suzuki (This photo was downloaded from the Facebook page of RAAM and is being used here for representation purpose. No copyright infringement intended)

A post about Suzuki available on the Facebook page of RAAM said: “ He’s done the Race Across the West twice (DNF in 2015, finished in 6th 2016), he was in the 2017 24-Hour Worlds where he finished 9th in the 40-49 group with 392 miles, and the following year he gave it his all in RAAM as only the second from his nation to attempt solo RAAM — the first was Kaname Sakurai who raced four years consecutively in the late 1990s.” It further added, “ As with many of us, Suzuki’s saddle time in recent months has been indoors, “I rode a bicycle 7365 km (4576 miles) by May—all on the indoor trainer (Zwift and Fulgaz). I was thinking of giving up riding a bicycle, but when I heard about the VRAAM, I suddenly decided to resume training.” The disappointment of his RAAM DNF has evidently weighed heavy on Suzuki, “I thought my challenge was over, and I never thought I’d have a chance to get revenge like this. The preparation time is short, but I will do my best. I want to continue cycling.”

The virtual version of RAAM followed the cancellation of the 2020 edition of the real race, announced on April 3. The subsequent virtual race was hosted on FulGaz, an Australian cycling app. Participants pedaled on a home trainer at location of their choice, the distance they logged appearing on screen as movement across the US. RAAM – its route runs from the US west coast to the east – is one of cycling’s toughest endurance races. Bharat, who is a familiar face in ultracycling in India, had been training for RAAM for the past couple of years. His 2019 attempt was prematurely terminated following an injury he sustained while training in the US. The subsequent 2020 attempt appeared lost due to pandemic till it found an extra lease of life in VRAAM. The virtual race – like the real one – had a cut-off of 12 days. The total distance to cover in the real race is approximately 4800km. Bharat did VRAAM in Pune. He had a crew to support him; two of them – Major Sandeep Kumar and Arham Shaikh – took the opportunity to complete VRAW (the virtual version of RAW).