A basketball player from school days, Ashish Kasodekar started participating in running events in 2013. He also forayed into long distance cycling. In August 2019, he became the first Indian to complete the 555k category of La Ultra-The High.

“ I believe that when people call you mad, you are on the right track. It means you are doing something nice for yourself,’’ Ashish Kasodekar said.

Weeks earlier, the unassuming travel consultant had become the first Indian runner to complete the 555 kilometer-category of La Ultra-The High, the challenging ultramarathon held annually in Ladakh. In retrospect, it had been a busy six years to where he was now, for Ashish commenced running at events only in 2013. Till then he had been a basketball player; someone who played competitively, was part of the state team and had played at the 1992 edition of Federation Cup. “ Team games teach you to relate to others and be positive,’’ he said. Basketball remains his first love and he is active in Masters Basketball. But alongside, there is this streak in endurance sport building up.

Born 1971, Ashish grew up in Pune, the middle sibling among three brothers. He took to basketball while at school itself. Following college, he worked with a travel agent for a year. Then he became General Sales Agent (GSA) for the Italian airline, Alitalia. He was happy to work for the airline; there was travel as part of work and the airline was a strong brand that sold without need for much marketing. “ I was getting into a comfort zone,’’ Ashish said. About seven to eight years ago, he therefore started his own travel consultancy – Edgeover Holidays. It is a proprietary concern; no partners, which is how he prefers it.  There was also a twist. Recognizing his need for personal time, he restricted clientele to friends. “ I don’t have any corporate clients. If you have corporate clients, it will interfere with the time you need to train for pursuits like endurance sports,’’ he said.

That conscious choice likely set in because around three years before he commenced his own business, Ashish participated in an adventure race in Pune called Enduro organized by Prasad Purandare. It was a team event – two men and one woman formed a team. “ I really enjoyed it,’’ Ashish said. The event also got him into a bit of endurance cycling; for Enduro, he borrowed his nephew’s bicycle. The attributes of the outing, distinctly different from a game of basketball, interested him. Basketball was competitive. Enduro was more about finishing. “ You have to learn to push yourself. It is a stronger body experience,’’ he said. Ashish found himself spending more and more time with people from his new found area of interest.

In 2011, there was a numerically special day: November 11, which folded neatly into 11/11/11, a series of ones.  Ashish decided to do something equally special for the occasion. He cycled from Pune to Goa on his Bianchi hybrid, reaching the coastal city in 21 hours. The following year, there was 12/12/12. For that, he walked 100 kilometers from Pune to Panchgani. In 2013, there was 11/12/13; this time he rode his Harley Davidson Iron 883 from Pune to Madurai and back, covering 2400 kilometers in 36 hours. In 2013, he also participated in his first running event. He did a 15k; it was executed with no prior training. In January 2014, he did his first half marathon in Mumbai. This time he trained for it. “ I really enjoyed that,’’ he said. In July-August of the same year, he participated in the London-Edinburgh-London (LEL) bicycle race. There were eight participants from India. None completed. However on the bright side, he had to train for LEL and that included a 1000 kilometer-ride from Pune to Hubli and back. Slowly but surely, endurance was creeping into his system and world view of things. In 2015, Ashish and Balakrishna Desai cycled from near the Gulf of Khambat in Gujarat to Khardung La in Ladakh. The project spanning sea level to one of the highest motorable passes around was called 0 to 18. They covered the distance in 24 days. Ashish used a friend’s MTB. In September 2015, he did his first full marathon; he elected to do it in Leh as part of that year’s Ladakh Marathon. Following this run, a friend asked him if he had heard of La Ultra-The High. Ashish hadn’t. But a spark was lit.

In 2016, at the Mumbai Marathon, Ashish met the qualifying time for the Comrades ultramarathon in South Africa. To be eligible, you had to run the full marathon in less than five hours. However, post qualifying he didn’t train diligently for Comrades. In South Africa, he cleared all the stage cut-offs of the race in time and the on the final stretch relaxed. Just as he was reaching the stadium – the finish point – he heard the officials announce that the overall 12 hours cut-off had passed by. It was a wake up-call. “ That last 200 meters taught me a lot about what to do. It told me I had to take things seriously,’’ Ashish said. The previous year at the Ladakh Marathon, he had seen the event’s ultramarathon segment – Khardung La Challenge. When his Comrades attempt ended in that disappointing final stretch, Ashish decided to try the Khardung La Challenge.

In the run up to the race, he came down with chickengunya. On the other hand, he had arranged a tour package for 13 people to Ladakh for the year’s Ladakh Marathon. On recovering from his illness, he decided to proceed with the group. He reached Leh, four days ahead of Khardung La Challenge. At the bib collection point, the race organizers were checking the oxygen saturation level of participants. His turned out to be 99, pretty good. “ I said, let’s try this race. If anything goes wrong I can hop into the ambulance,’’ Ashish said. On race day, the flag-off from Khardung village was at 3AM. “ There was a point when I felt I may have to quit. I had arrived in Ladakh only some days earlier and I felt I wasn’t acclimatized well,’’ he said. A doctor in a passing ambulance checked his oxygen saturation level. It was 72. He asked Ashish to pause for 5-6 minutes. The level recovered to 85. This was just ahead of North Pulu. Ashish took it slowly thereon. Eventually he finished within the assigned cut-off of 14 hours. “ That race was a great boost for my confidence,’’ he said. Next day, at the Ladakh Marathon, he hired a cycle and pedaled 55 kilometers up and down with the runner’s group he had brought for the race. In 2017, He returned to South Africa and completed Comrades in 11 hours, 38 minutes. The changed perspective helped. He was now focusing on the target and training diligently. “ I am a good listener. I also accept tips,’’ he said. Following successful completion of Comrades, Ashish settled down to consider La Ultra-The High, 2017 edition.

Now over a decade old, La Ultra-The High has a course that straddles the Nubra valley-Leh-Tanglang La region; all of it, Ladakh. A union territory since August 2019, Ladakh has an average elevation of around 10,000 feet. While climate change is happening in Ladakh too, it has traditionally been a high altitude cold desert. By day, the clear skies of altitude, renders the sun a blazing orb. The combination of weather conditions and altitude makes La Ultra-The High, a tough ultramarathon. As runners depart the start line in Nubra, the first major challenge to overcome is Khardung La (17,582 feet).  Into the longer race categories, they also have to tackle Wari La (17,224 feet) and Tanglang La (17,480 feet); in the 555k category, the last two passes are repeated on the return.

“ I like to run in Ladakh,’’ Ashish said. He stayed at a home-stay for 10-15 days and then proceeded to attempt the 111k segment of La Ultra-The High. He finished 111k successfully; at 19:48 hours taken to complete the task, he was among the last of the finishers. The race was won by Tsering Stobgias in 12:32. Having collected his medal, Ashish hung around to see how the race was unfolding for those trying 222k and 333k. “ The main organizer of the event, Dr Rajat Chauhan, always spoke of 111k as baby run. I felt angry. I told him that I wanted to try 333k next. He said: hold on; you are getting excited,’’ Ashish said. That year there was only one finisher in 333k – Matthew Maday of the US. Ashish registered for the 333k. He didn’t wait to graduate through the 222k. That takes time; it also consumes that much more money.  In fact for the 333k, he had to seek crowd funding. It provided 70 per cent of the funds needed.

He commenced training in November 2017. In April 2018, he completed the 160k run at Garhwal Runs, which is positioned as stepping stone to La Ultra-The High. Closer to the event in Ladakh, he did a mix of run-walk from Manali to Leh. He ran around 30 kilometers every day on that passage through altitude. That year, five Indian runners participated in 333k, the first Indians to do so.  Ashish was among those who completed. “ Up to 222 kilometers it was good. Close to the finish I was dealing with delirium,’’ he said. He finished the race in 71:59:29 to place third. His support crew included Balakrishna Desai, Mangesh Shinde, Prasad Shett, Amit Kasodekar and Dhananjay Apte. The race was won by Munish Dev in 71:30:28. From 333k to 555k was natural progression. 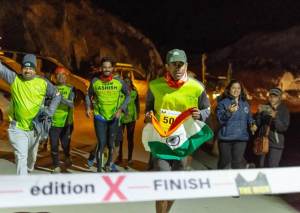 In 2019, the flag-off was in the rains. It was minus 12 when Ashish reached North Pulu. He was advised to change his attire. He borrowed. “ I was lucky there were athletes around who were willing to loan their spare clothing,’’ he said. The 2019 edition of La Ultra-The High was noted for its tough weather conditions. Ashish reached Wari La rather late but happy in the head.  In both 333k and 555k, the real challenge is Tanglang La. In 333k, it looms after Khardung La and Wari La have taken their toll on you. In 555k, the pass is done twice and the problem as Ashish pointed out, is that on the return leg tired runner loses elevation slower than before. He completed 555k within cut-off time to place third. He suffered no cramps, blisters or frostbite. “ Self-care was damn good,’’ he said. The time taken was 126:18:00. The race was won by Jason Reardon of Australia in 120:19:00; Matthew Maday finished second. Ashish’s support crew featured both his brothers – Anil and Amit Kasodekar; Arvind Bijwe, Hari Dammalapati, Venkatesh Kashelikar, Sushil Dhende and Swaroopa Bhadsavle.  This time Ashish experienced no hallucinations. “ We took good care of sleep, nutrition and hydration,’’ he said.

(The authors, Latha Venkatraman and Shyam G Menon, are independent journalists based in Mumbai. For more on La Ultra The High, please refer this blog’s archives.)