Deepak finished the race in eight hours, four minutes and 16 seconds. According to Peteremil Dsouza, member of the ultramarathon committee of the Athletics Federation of India (AFI) and who has accompanied the team to Jordan, Deepak’s performance is a new best for India. The previous national was 8:09:30 set in 2012 by Vinodkumar Srinivas. In the women’s category at Aqaba, Kolkata-based Anjali Saraogi finished fourth in a new national best of nine hours, 22 minutes (provisional figure), Peteremil said.

Sunil Chainani, also member of AFI’s ultramarathon committee, informed that the Indian men’s team had secured gold in their category with cumulative timing of 24:40:00. Jordan (31:14:21) placed second. The Indian women’s team placed second in their gender category (30:40:33). The winning team in the women’s category was Australia (30:21:40).

IAU stands for International Association of Ultrarunners; it is the apex body for ultrarunning worldwide. 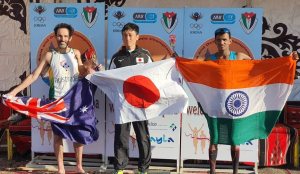 According to IAU’s Twitter feed earlier on race day, at kilometre 95, Tatsuya Itagaki of Japan was leading in the men’s category followed by his fellow countryman Hideaki Yamauchi and Brendan Davies of Australia. The lead position changed after this juncture.

Similarly, in the Twitter update six hours into the race, India’s Anjali Saraogi was in fourth position among women. Gunjan Khurana, also of India, was in sixth position and Darishisha Iangjuh in seventh. Mai Fujisawa of Japan eventually won the women’s category in timing of 8:20:44. Finishing second was Amelia Griffith of Australia (8:57:02). Konoka Azumi of Japan finished third (9:03:22).