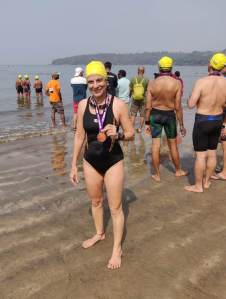 Pervin Batliwala, Mumbai-based long distance runner, attempted her first race in open water swimming recently. The 64 year-old did not finish within assigned cut-off time. But she enjoyed the experience thoroughly. This is her journey; as told by her:

In 2018, I participated in three major marathons – Mumbai Marathon, London Marathon and New York City Marathon. Including training sessions, that was a lot of running.

I was getting weary of running.

I needed a break.

Many of my friends had participated in Swimathon, a sea swimming-event in Goa, organized by Enduro Sports. Some of them suggested that I attempt it. I took up that idea and decided to enrol for the event’s 2019 edition.

Several years ago, I had learnt swimming at the pool at YMCA, Bombay Central. I ended up training in the breast stroke; I was not very proficient in freestyle.

Every now and then I used to swim. Swimming is good cross training for running. One of my friends, Zarir Baliwala, is a member of Breach Candy Club. I would go with him. He is a very good swimmer.

For Swimathon, I signed up for the event’s two kilometre-distance category. My preparation for the race was great fun. They say that one should enjoy the process and not worry too much about the outcome. This was entirely true for me in the case of Swimathon. I just completely enjoyed the process, right from deciding to enrol to finishing the event.

My event was on March 24, 2019. I landed in Goa on a Thursday. On Friday, many of us who were participating in the various races decided to do a small practice swim. This was the first time I was stepping into an open water situation. My training had been entirely in the swimming pool at Breach Candy Club. However I was absolutely comfortable swimming in the sea at Goa. It was more like a bay. We swam for 600 meters just to get familiar with the water body.

On the day of the race, there were about 200 swimmers attempting the same distance (2km) as me. It felt like a giant churn when the swimmers started the race. As I was first timer, I decided to wait until the swimmers had all started and then commenced. Also, most of them were freestyle swimmers and I was doing breast stroke. I thought it was best to allow them to go ahead of me.

My aim was to finish the race. Just two weeks ahead of the event, I had suffered a back problem. I had experienced similar back problem soon after the Mumbai Marathon too.

We had to swim a distance of one kilometre, turn around and come back to log the scheduled distance. The going was a bit tough for me. The current in the sea was quite strong and it was flowing against the direction the swimmers were moving to. At the turning point many swimmers collided into me and I ended up getting cramps in my hamstring. I lost about five minutes trying to get to the other side of the boat marking the half way point. But once we turned, the current was in our favour and the return to the finish line was quite easy.

I was not tired at all. In fact, at the finish line I felt I could have gone on for some more time. Also, I guess because of my long-distance running, I had the endurance to sustain it. If your breathing technique is right there is very little chance of getting tired. Because I was doing breast stroke, sighting the route was not a problem for me.

I exceeded the time limit of one hour, fifteen minutes assigned for the swim. I finished the race in 1:19:21. Initially, I was a bit disheartened. But then I remembered my first ever run. I had so much difficulty that I had to walk the second half of that half marathon in Mumbai, years ago. Compared to that, the timing here at Swimathon was not bad at all. It is good to know where I stand. I can now train better.

Overall, it was an extremely enjoyable experience. It was a well organised event. During the race, there were so many kayaks going around with volunteers asking the swimmers if they needed any help, hydration etc. There were quite a number of volunteers. There were many participants too; the estimate I heard of was – over 600 swimmers across various distance categories.

Swimming is definitely on the cards for me. I plan to now train in freestyle swimming because that gives you more speed compared to the breast stroke.

I also plan to learn cycling. I would definitely like to attempt a triathlon.

This year, I will be attempting Berlin Marathon in September. I will be registering for Tokyo Marathon and Chicago Marathon – both in 2020 – to complete the World Marathon Majors. Once that is done, I may look at triathlon or running events entailing distances longer than the marathon.

(Pervin Batliwala spoke to Latha Venkatraman. Latha is an independent journalist based in Mumbai. For more on Pervin please try this link: https://shyamgopan.com/2016/09/30/age-is-what-you-make-of-it/)