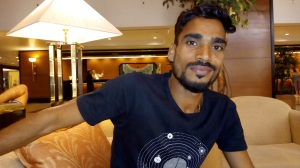 “ It is the best result so far in my career,’’ Gopi said.

Prior to today’s race, Gopi’s personal best (PB) was 2:15:25, which he achieved at the 2016 Rio Olympic Games. The timing at Seoul would also be the closest any Indian athlete has come to in recent times, to the longstanding national record for men in the marathon; two hours 12 minutes set by the late Shivnath Singh in May 1978 in Jalandhar. In 2017, Gopi had triumphed at the year’s Asian Marathon Championship held in China covering the distance in 2:15:48.

With the Seoul marathon result, Gopi has met and surpassed the qualification time assigned for the 2019 IAAF World Championships in Doha. For the men’s category in the marathon, the qualifying time for Doha is 2:16:00. In January 2019, despite preparing well, an unexpected calf injury had prevented Gopi from achieving this mark at the 2019 Tata Mumbai Marathon (TMM). Running well till injury struck forcing him to halt and stretch, he finished second among Indian elite runners with a timing of 2:17:03. At the Mumbai event, from among the assembled Indian elite marathon runners, Nitendra Singh Rawat who won in the men’s category and Sudha Singh who topped the women’s category had managed to meet the cut-off for Doha.

Following this setback, Gopi had registered to participate in the 2019 Tokyo Marathon hoping to qualify for Doha. However there were last minute hiccups in securing visa and that plan had to be abandoned. The Seoul Marathon of March 17 had then emerged as alternative. From the perspective of focus in preparations, these developments were a little upsetting. There was some disappointment when Tokyo, for which he had prepared diligently, failed to materialize. But he quickly recovered and got Seoul into focus. According to Gopi, who trained for the event in Bengaluru, conditions were generally cold in Seoul. It also rained the day before the race. “ But the run went well,’’ he said. Gopi has an old hamstring problem. It made its presence felt in the last five to six kilometers. “ Had that not happened the timing would have been still better,’’ he said. The calf muscle issue – which had troubled him in Mumbai – stayed in check. “ There is no completely perfect day in running. You make the best of what you have,’’ Gopi said.

The event in Seoul is Asia’s oldest continuously held marathon and the second oldest in the world after the iconic Boston Marathon. Sunday’s race was won by Thomas Kiplagat Rono of Kenya in a timing of 2:06:00. Gopi placed eleventh among elite men.

For more on T. Gopi please visit these links: