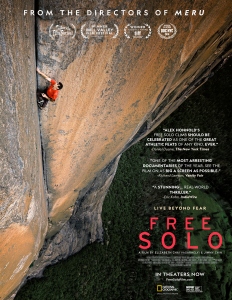 The world of climbing won’t forget the 2019 Academy Awards ceremony.

The movie Free Solo which profiles rock climber Alex Honnold, won the Academy Award for best documentary feature. Alex Honnold is noted for his stunning free solo ascents; basically solo climbs without using any ropes or climbing gear. All that he uses on these ascents from the litany of climbing paraphernalia are rock climbing shoes and climbing chalk, carried in a chalk bag.

Free Solo covers Honnold’s 2017 solo ascent of El Capitan’s Freerider route. El Capitan is a vertical rock formation, roughly 3000 feet high, in Yosemite National Park, US. It is a much revered objective in the world of big wall climbing.

The film is directed by Elizabeth Chai Vasarhelyi, a documentary filmmaker and Jimmy Chin, professional climber and skier who is also photographer for National Geographic. “ The film benefited from Honnold’s thoughtful charm on camera, and Chin and Vasarhelyi’s incredible access during Honnold’s years-long training process, including while he was thousands of feet off the ground without a rope,’’ Outside magazine observed in an article marking the Academy Award. The magazine described the movie as the first climbing film to receive such broad mainstream acclaim.

Free Solo was released in August-September 2018. According to Wikipedia, it has so far made 19.3 million dollars at the box office. The highest grossing documentary on IMDB is 2004’s Fahrenheit 9/11, directed by Michael Moore. It made 119.19 million dollars.

The 2019 Academy Awards ceremony – it honored the best films of 2018 – was held on February 24 (early hours of February 25 in India) at the Dolby Theater in Hollywood, US. For more on Alex Honnold please try this link: https://shyamgopan.com/2017/03/16/alone-on-the-wall/