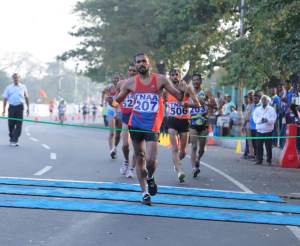 The Sixth National Open Race Walking Championships held over February 16-17 in Chennai was to serve as platform for Indian athletes to meet the qualifying time for the IAAF World Athletics Championships due later this year in Doha, Qatar.

However, none of them made the cut.

At the just concluded event in Chennai, Jitendra Singh Rathore of Rajasthan was the winner in men’s 50km race walk. He finished the race in 4:23:23 hours to secure the gold medal, ahead of Sagar Joshi of Gujarat. Sagar finished the race in 4:24:21, earning the silver medal. Haryana’s Pawan Kumar took the bronze with a timing of 4:30:49 hours, the results posted on AFI’s website said.

The men’s 20km race walk was keenly contested. Kerala’s Irfan K.T took the gold covering the distance in 1:26:18. Second place went to Devender Singh of Haryana (1:26:19) while Sandeep Kumar (1:26:19), also of Haryana, finished third. It was photo finish for Devender and Sandeep. Tamil Nadu’s Ganapathi Krishnan (1:26:20) missed the podium by a whisker. While informing the results, the AFI statement of February 16 quoted Irfan as being disappointed that his effort wasn’t good enough to qualify for the world championships. He intends to try again next month at the Asian Race Walking Championships to be held in Japan.

This was the third consecutive triumph for Irfan in the discipline at the national championships.

The women’s 20km race walk was won by Soumya Baby of Kerala who clocked 1:40:25. This was well short of her national record – 1:31:29 set in February last year. Uttar Pradesh’s Priyanka finished second in 1:41:20 while the bronze medal was picked up by Haryana’s Ravina who finished in 1:41:46.

The IAAF World Athletics Championships is scheduled to be held in Doha in September-October this year.

According to race walkers this blog spoke to, Chennai’s heat and humidity took a toll on their performance.

“ The race was good but the heat was too much,’’ Jitendra, the gold medalist in 50km, said when contacted. His personal best is 3:58:56 hours, which he set in the National Open Race Walking Championships in New Delhi in 2018.

“ The race was tough because of the heat as well as the humidity. Normally this competition is held in Delhi or Jaipur where the weather at this time is conducive for good performance,’’ Sagar, who won silver, told this blog. His had trained for this competition with a targeted timing of 3:56 hours.

Haryana’s Sandeep Kumar, who holds the national record of 3:55:59 in the 50km race walk, set at the Indian Race Walking Championships last year, did not start the contest in that discipline, the table of results from Chennai showed. Also DNS (Did Not Start) in the 20km race walk was Manish Singh Rawat of Uttar Pradesh.

Jitendra and Sagar, both of them from the Indian Army, train at the Army Sports Institute in Pune. Following the Chennai event, they headed back to Pune. According to Sagar, while it is for the AFI to take a call on sending them to the upcoming meet in Japan, as back-up plan, the athletes’ coach Basanta Bahadur Rana has suggested the option of requesting the army to send them to Japan. Basanta Bahadur Rana had represented India in race walking at the 2012 London Olympics.

At the Chennai meet, Suraj Panwar of Uttarakhand won the gold medal in the boys’ 10 km race clocking a time of 43.19 minutes. Haryana’s Juned won the silver with a timing of 43.32 minutes. The bronze medal went to Farman Ali of Uttar Pradesh; he finished in 44.50 minutes.

Among girls, Roji Patel of Uttarakhand secured gold in the 10 km race. She finished the race in 53.38 minutes. Suvarna Kapase of Madhya Pradesh secured silver with a time of 55.36 minutes and Punjab’s Gurpreet Kaur got the bronze with a time of 57.00 minutes.

Moves are afoot to set up a state level adventure council in Maharashtra.

The yet to be named body aspires to bring together stakeholders in the field of outdoors and adventure sports; stakeholders broadly meaning service providers, persons / organizations availing service and the government.

Following Public Interest Litigation (PIL) filed by a bereaved parent some years ago, the Maharashtra government had issued a set of guidelines for adventure sports.  The original set of guidelines was subsequently replaced by a second lot. At the time of writing, the second version was in force. Over the past year or two, several Indian states have pushed to frame guidelines for adventure activity. Concerns fueling the trend span guidelines for safety and risk management to impact on environment from too many visitors to sensitive wilderness locations, not to mention poor understanding of best practices to follow in the outdoors.

It is understood that the proposed council, besides bringing together the aforementioned stakeholders and contributing to guidelines, seeks to serve the community associated with outdoors and adventure sport, engage in advocacy and be able to facilitate required processes through a multi-pronged approach.

Among points debated were the relevance of standardized guidelines nationwide as opposed to each state having its own with consequent questions over mutual compatibility and the prospect of grading service providers (example: adventure tour operators) on the basis of track record and safety standards so that clients have a truer picture of who they are dealing with.  Also mentioned was the need to support the adventure council with adequate resources for effectively implementing its work.

Earlier at the day long-proceedings, Peter Van Geit spoke at length about his 75 day-trail run, spanning some 1500 kilometers and covering 40 high, mountain passes essayed last year in Himachal Pradesh.  Steve Swenson spoke of the Khumbu Climbing Center established in Nepal by the Alex Lowe Charitable Foundation. Later, as part of receiving the 2018 Kekoo Naoroji Book Award, he also spoke about his book Karakoram – Climbing through the Kashmir Conflict and his climbs in the region. While the Jagdish Nanawati Award for Mountaineering Excellence was not given this year, the Garud Gold Medal for excellent support staff was presented to Samgyal Sherpa.