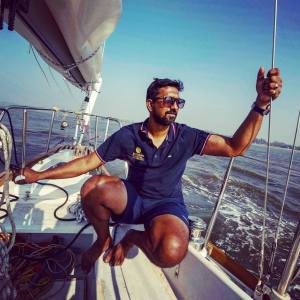 The 2018 GGR, which began July 1 from France, is now passing through the Indian Ocean, albeit way down in the southern hemisphere. The race with technology levels pegged back to what prevailed during the 1968 GGR entails a solo, nonstop circumnavigation of the planet in a sail boat. It is adventure, refined.

More than two months since the 2018 Golden Globe Race (GGR) commenced from Les Sables-d’Olonne in France, the race leaders are past Cape of Good Hope and Madagascar. They are well into the Indian Ocean; the region they are in qualifies to be Southern Ocean. As of September 13, 2018, they lay far out at sea in the southern hemisphere, south-south west from the Indian peninsula.

Among the world’s great capes, the next one for them to rendezvous with is Cape Leeuwin, Australia. Well past this cape at Storm Bay in Hobart, Tasmania, the participants will have a brief meet up with race officials and media. According to race rules, the participants will pass through a `gate’ and drop all sail on the boat if it is safe to do so. The entrant may moor, anchor, motor or drift but may not re-cross the gate to continue to Cape Horn until at least 90 minutes has elapsed. During this time when the nonstop, unsupported character of the race will continue to remain intact, the participants can pass on any photos, films, letters they may have. They will also have to display their `safety pack’ for inspection. The pack – it contains a portable GPS chart plotter – is meant for use in emergency and a broken seal (indicating the pack was opened) denies the participant any official ranking in GGR or GGR trophies. He / she can however continue in the event under `Chichester Class.’ Further instances of stopping anywhere or breaking the seal of the pack, will disqualify the participant from the event, altogether.

As of mid-September, of 18 sailors originally participating in the 2018 GGR, seven had retired from the race while one stood relegated to Chichester Class. Commander Abhilash Tomy KC of the Indian Navy – he is the sole participant from India and only invitee from Asia – was among those still in the race. At the time of writing he was in fourth position. He had made some significant gains in the preceding days. The race leader by sizable margin was Jean Luc Van Den Heede of France. He was followed by Mark Slats of Netherlands, Gregor McGuckin of Ireland and Abhilash in that order.