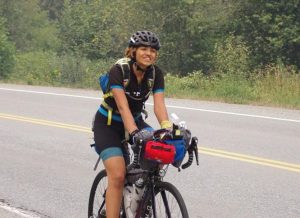 Vedangi Kulkarni (This photo was downloaded from the cyclist’s Facebook page and is being used here for representation purpose only.)

Vedangi Kulkarni, who is attempting to be the fastest woman cyclist to go around the planet unsupported, has completed her trip across Canada.

September 28 noon, her father Vivek Kulkarni informed that having finished the Canadian leg of her journey, Vedangi had just reached Iceland signifying start of the European and Russian segment.

She was expected to commence cycling in Iceland from September 29.

Vegangi has covered approximately 16,000 kilometers (roughly 9940 miles) so far, Vivek said. Prior to cycling across Canada, Vedangi had cycled in Australia and New Zealand. She began her journey from Perth on July 17, 2018.

The record Vedangi seeks to improve upon is the one held by Italy’s Paola Gianotti. In 2014 she completed circumnavigation unsupported on a bicycle – although not in consecutive stages – in 144 days.

As per information available on Vedangi’s website, her journey of 18,000 miles (approximately 29,000 kilometers) will be attempted in four stages. The first stage will see her cycling through Australia and New Zealand. The second stage will see her cycling across Alaska and Canada. The third stage spans Europe, Scandinavia, Russia and Mongolia. The fourth and last stage covers China and the trip back to where she started in Australia. Given the fact that all required visas cannot be applied for and obtained well in advance, the exact route of Vedangi’s expedition has to stay open to adjustments as her journey progresses.

Vedangi, 19, is currently a student at Bournemouth University, UK. She spent some part of her early childhood in Panvel (not far from Mumbai); later she attended Jnan Prabodhini school at Nigdi near Pune. Her family now resides in Kolhapur. The circumnavigation plan assumed shape sometime in September-October 2017. Vedangi’s circumnavigation attempt will take her across 14-15 countries, the final number depending on how the route is affected by visa availability. A film is being made on her journey. There will be a film crew meeting her at various points on the way.

(The author, Shyam G Menon, is a freelance journalist based in Mumbai. For more on Vedangi and her journey please scroll down or select from the blog archives.)