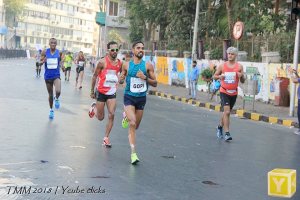 The 2018 edition of the Mumbai marathon was significant for the change in title sponsorship. The era of association with Standard Chartered Bank ended. In early August 2017, it was officially disclosed that the Tata Group had signed a ten year-deal to be title sponsor of the event.

Both Standard Chartered and Tata have a history of sponsoring marathons. A London headquartered-bank with operations mostly in Asia, Africa and Middle East, Standard Chartered sponsored a string of marathons spanning the above mentioned regions. In March 2017, news reports said the bank’s financial woes had prompted it to pull out of the Mumbai marathon. This January as the 2018 Mumbai marathon was underway there were seasoned runners trading the annual pilgrimage of running it for a shot at the Dubai marathon, which incidentally remains sponsored by Standard Chartered. The two events are separated by less than a week. However Tata is bigger fish in the world of marathons. The prime mover within its fold as regards marathons is IT major, Tata Consultancy Services (TCS); the TCS website has a section devoted to sports sponsorship. Peruse it and you will see the company associated with a clutch of major international foot races. It is title sponsor for the marathons of Mumbai, New York and Amsterdam. It is title sponsor of the world’s largest cross country race in Lidingoloppet, Sweden, the presenting and technology partner for The Australian Running Festival and technology partner for the marathons of Boston, Chicago, London and Singapore.

Thanks to the ascent of city marathons, the number of recreational runners in India has been growing steadily. For the 2018 edition of the Mumbai marathon (the first time it was sponsored by Tata), some 45,000 people registered successfully. Standard Chartered did valuable service supporting the Mumbai marathon through its early years but as one among several foreign banks operating in India, its footprint is modest. Tata is household name in India. The above reasons – Tata’s familiarity with the world of marathons and the name being well known in India – made the title sponsorship deal of August 2017 interesting and couched in possibilities. 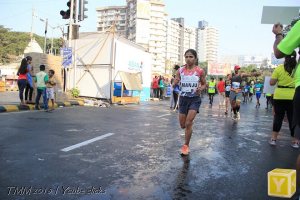 In the world of sponsorship, marathon falls in the category of participative sport. A big share of sponsorship money in our times flows into spectator sports. Conceptually, they are descendants of the old Roman arena. You have immediate arena and extended arena afforded by broadcast media, mainly television channels and live-streaming on Internet. The cumulative audience here is enormous, running into tens of thousands and in some cases, millions. Cast at the deep end of competition, spectator sports tend to stay distanced from viewer. Like a mountain climb, the few that make it to the summit become the stuff of everyone else’s admiration. You relate to the excitement vicariously. Participative sports attract in a different way. They invite you to participate, experience directly. Unlike in spectator sports where teams and team members are famous and the rest stay anonymous viewers, in participative sport everybody participating has an identity. Once you have registered for a marathon, there is a run-up to actual event, which may be anything from a couple of weeks to couple of months. During this time, there is periodic correspondence between organizer and participant. There is acknowledgement of registration, confirmation of participation, reminders, invitation to pre-race expo and finally the expo, where many of the sponsors known until then as digital images in correspondence, manifest physically. The exercise provides a dimension of interface rarely found in spectator sport; the engagement in participative sport resembles direct marketing, closer perhaps to discreet direct marketing. It even graduates to real involvement for with products like running gear and shoes; the participant has a personal need he tries to satisfy given race approaching. Equally as regards services like registration process, app based-tracking (which allows runner’s progress to be tracked by family and friends), result and timing details wherein technology partners matter, efficiency is quickly felt and appreciated. Repeat registrations make the relationship with event, stickier. While this is the architecture of engagement, sponsors of marathons rarely – probably never – talk of it as a marketing exercise. Corporate backers of running – given health benefits associated with running and the satisfaction participants draw from completing a race – position it as avenue to give back to workforce and community. Gains to brand profile accrue obliquely.

On the street, there were expectations when Tata assumed title sponsorship of the Mumbai marathon. Besides the familiarity Tata has with marathons in US and Europe, their sponsorship of the Mumbai marathon was seen as homecoming. Tata’s headquarters are in Mumbai. For some runners this blog spoke to, the change in title sponsorship wasn’t significant because event implementation is by Procam. In their eyes, the title sponsor was funds provider. Many others though sensed potential for change. But they couldn’t gauge what is realistically possible and not. The feedback we got from a mix of runners and marketers we spoke to on the change in title sponsor for the Mumbai marathon, was that these are early days. The January 2018 edition of Tata Mumbai Marathon (TMM) was mere months after Tata assumed title sponsorship. The 2018 TMM saw a new timed 10 km-race, introduced. Also debuting was the `inspiration medal’ for full marathon finishers. Going ahead, best practices from Tata-backed races overseas, could be infused into TMM, those we spoke to felt.

This image was downloaded from the TMM website. It is being used here for representation purposes only. 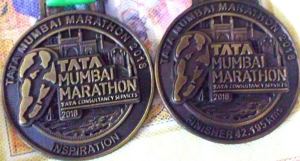 The 2-in-1 `inspiration medal,’ one for finisher to keep, the other for potential gifting to someone who mattered in runner’s journey to completing the full marathon (Photo: courtesy Mani Iyer)

At the Nariman Point office of Chlorophyll Innovation Lab, Chitresh Sinha CEO & Head Innovation shared the story behind the `inspiration medal’ introduced in 2018. Different from the standard advertising agency or consultancy, Chlorophyll Innovation Lab is a brand innovations collective that works with brands, evolving technologies, art and social impact to “ bring alive innovation in integrated ways.’’ Procam, organizers of the Mumbai marathon, is one of its clients. According to Chitresh, between 150,000-200,000 people apply for TMM, which is also the single largest platform to raise funds for charity in India. “ Brand value is more at the human level than as return on investment for association with a running event,’’ he said. Studies have shown that people decide to attempt a marathon for factors ranging from the health benefits of running and sense of achievement to the meditative quality of running. “ Why do they wish to repeat it? That is the interesting part – they do so because it changes their life,’’ he said quoting examples of runners who kicked addictions and bad habits, grew closer to their families and found time for their children because their life transformed through training to run. For such reasons, it is not possible to benchmark the dazzling world of spectator sport with participative sport. “ Spectator sport is all about eyeballs. Its real impact on people’s lives is limited,’’ Chitresh said. If you want visibility and have a specific window of time assigned for gaining it, then investing in spectator sports makes sense. With participative sports, you stay invested longer but you reap an enduring bond. Currently India has around 1-1.5 million runners and 800 odd timed races. Chitresh said, Procam wishes to see the overall number of runners (across India) grow to 20 million in the next five years or so. That means the idea of running must spread quietly and convincingly. The social aspect of running was the premise from which Chlorophyll Innovation Lab recommended the `inspiration medal,’ a composite of two medals in one. A typical city based-runner, balancing work and life, is often seen off to training by wife and children. An early breakfast for instance, requires more than one pair of hands in Indian households. An early departure for training is a team effort by family. If you have a medal that is a composite of two separate medals and you can peel one off to gift it to somebody who played a pivotal role in making you a runner, then it helps endear running to more people.

As with many sports events, TMM straddles a fine divide between participation and performance. It takes both to shape an event’s stature. Not all runners we spoke to in Mumbai were enthused by the `inspiration medal.’ Some of them wished that improvements to TMM stay focused on running and runners’ needs, a view that is also partly fueled by Tata’s international presence in marathon events. If you imagine down running’s alley, the possibilities one can speculate, are dime a dozen. Which of the lot is practical enough to implement? That challenges. Consensus among those we spoke to was that improvements to how TMM is arranged and managed plus infusion of technologies relevant to running could be a realistic expectation over the next few years. Anything more, likely takes more than just Tata. 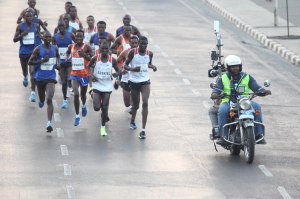 TMM is recognized as the flagship running event in India. “ A distant second to the Mumbai marathon would be the one in Bengaluru,’’ a leading amateur athlete (name withheld as we promised him anonymity for this conversation) said. “ There is a depth of awareness about the annual marathon in Mumbai that you don’t find in other Indian cities. When I landed in Mumbai to run the 2018 TMM, even my taxi driver knew that the marathon was due. Among major marathons, this is without doubt the best organized race in India. But if you are talking of positioning Mumbai in the same category as Boston and New York because Tata is now involved, then we are a long way off. First those events are far older than TMM. They have evolved that much more. Second, those are cities which view their annual marathon as an important fixture in the annual calendar. Over there, the civic apparatus works in tandem with runners and organizers to make a city’s annual marathon happen successfully. That is running culture – and in that, India is far behind,’’ he said. Major cities overseas get their marathon act together because running is integral to how they imagine lifestyle. Will Tata’s assumption of title sponsorship, make the collective effort to host Mumbai’s annual marathon more convergent towards its goal of a good experience, year after year? Will Mumbai formally identify itself with running and its annual marathon?

Cheering is a critical component of any marathon’s ecosystem and when it comes to city marathons, it is a window to meeting the host. The Boston Marathon, world’s oldest annual marathon, began in 1897. That makes it 121 years old. Indians who have run in Boston speak of it as a memorable experience, cheering playing no small part in it. At 15, TMM is definitely past infant stage. On January 21, 2018, just beyond the Mumbai marathon’s finish line, I met a city based-full marathoner who felt that cheering along the marathon’s route had come down. That is hard to believe given so much said day in and day out about the spirit of Mumbai. It is a fact that while running, runners dwell in a `zone’ in the head; cheering doesn’t register always. Still did this runner notice something many of us didn’t or preferred to overlook in our affection for the city? Can there be initiatives that make spectators and non-runners feel invested in the annual outing? A city that loves its marathon must never stop exploring how the experience can be improved for success can stagnate and novelty can fade.

Fifteen years old and growing, the evolution of the Mumbai marathon will be worth watching.