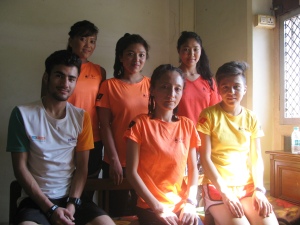 Some of the runners from Ladakh (Photo: Shyam G Menon)

Mumbai’s Priyadarshini Park is an oasis in concrete jungle. The composite of park and sports complex includes among other facilities, a 400 m-running track. The place is right next to the sea. Its three days after the 2018 Tata Mumbai Marathon (TMM); over five years since `jhuley’ became part of the city’s marathon season-vocabulary. The runners from Ladakh – the team that visits Mumbai every year to run TMM – kept jogging on the track. They had one more event to participate in – the Thane Hiranandani Half Marathon – before returning to Leh and winter. Savio D’Souza, leading city based-coach sat by the track observing the runners. “ Their progress must be seen in the right perspective,’’ he said.

Cut back to four hours earlier, same day afternoon, when this blog caught up with the team at their apartment near Mumbai’s Chhatrapati Shivaji Maharaj Terminus (CSMT). In total, the 2018 team from Ladakh featured 10 people, nine of them designated runners. Four of the lot, two men and two women – among them, Jigmet Dolma and Tsetan Dolkar scheduled to be in the Indian elite category at TMM – had left Leh on November 13 for the annual pilgrimage to run at various marathons in India. Their first halt was the 2017 Airtel Delhi Half Marathon (ADHM), which Jigmet completed in 1:26; Tsetan in 1:29. They then moved to Darjeeling, where they trained for a few weeks before traveling to Kolkata to run the Tata Steel 25K. At this event, Jigmet finished in 1:46; Tsetan in 1:49. From Kolkata, they reached Mumbai on December 21, exactly a month before the 2018 TMM. Meanwhile another group of six athletes left Leh on December 19. They joined the four already in Mumbai, on December 22. The team trained with Savio. At the apartment, Jigmet, Tsetan, Sonam Chuskit and Tashi Lodol put their heads together to estimate how many podium finishes the team must have earned at the various races they participated in, since the annual trip to Mumbai’s marathon commenced in 2013. They could recollect 9-10 podium finishes. 2018 has proved to be a reality check; a year of learning. Although their performance has been improving with experience, as of late January with the Thane race alone remaining, there had been only one podium finish – Sonam Chuskit placing third in her age category in the full marathon at TMM. Last year they had two podium finishes at TMM. At 2018 TMM, the team suffered an unexpected setback.

Jigmet and Tsetan run together. “ We are always alongside for much of a race, breaking free and going for the finish only in the concluding portion,’’ Tsetan said. Their timings betray the strategy. They are usually separated by a minute or two, sometimes seconds. On January 21, 2018 while running TMM’s full marathon, Tsetan had a packaged drink from one of the aid stations at the 21 km-mark. Five minutes later, she threw up. Although she footed it to the finish, she was not feeling good at all. Past the finish line, she threw up again. Needless to say her timing went for a toss; she finished in 4:21. Used to running with Tsetan, Jigmet’s progress was also disturbed. She had targeted hitting the half way-mark in 1:30 but found herself four minutes slower. “ I became tense,’’ she said. She finished in 3:13, placing ninth among Indian elite women. At the 2017 edition of the Mumbai marathon, she had placed third in the same category. “ Don’t go by the position she got. Jigmet’s timing has improved year on year; her timing at 2018 TMM was better than in 2017. The difference is in 2018, we had a much more competitive field,’’ Savio said. 2018 will witness two major international events in sport (relevant to Indian athletics) – the Commonwealth Games due in Australia and the Asian Games scheduled in Indonesia. Given this, the elite field in the Indian category at TMM, was quite competitive this year. For the Ladakhis, this is a reality check five years into their commencement of running TMM. “ For the first two years in that we had no training. We were merely running at events. Less than three years ago, we started training with Savio sir. It is only from then that we have had the benefit of structured training, including an idea of how to train in the months we are in Ladakh,’’ Tsetan said. Savio expects the field to be competitive for the 2019 TMM too, as by then Indian athletics would be in the run up to the 2020 Tokyo Olympics.  What makes Savio happy is the story in the details. First, ever since he stepped in to coach, the timings of his Ladakhi trainees have vastly improved. Second, a runner like Jigmet may have missed the podium at 2018 TMM but she improved upon her timing from 2017 and is within striking distance of runners ranked above her up to fourth and fifth positions. The gap in timings in this bunch is narrow. Savio maintained that his consistent instruction to trainees is to focus on one’s own performance. “ We wish to run again at TMM,’’ Jigmet said.

The Ladakhi team’s annual trip to run at events like ADHM and TMM has been put together by Rimo Expeditions, organizers of the Ladakh Marathon. According to Savio, there are valid reasons for the runners from Ladakh seeking to showcase their performance at TMM. Usually the progression of an athlete to national camp happens through a circuit that starts with selection at district level and then graduates to representing the state. When I asked the Ladakhi runners about this pattern of progression, they said that district level selection has either been erratic or when it happened, the graduation to representing the state wasn’t there. Ladakh is the eastern part of Jammu & Kashmir (J&K), a state troubled by militancy in its western half. The state is administered from the west; the bulk of its political imagination resides there. One of the runners I spoke to recalled that when he secured district level selection in Leh “ even officials from the Sports Authority of India were present.’’ Sports Authority of India (SAI) is known to do talent scouting. However beyond that selection, nothing happened. With that regular route of progression – district level-state level-national camp – blocked, sole option for Ladakhi runners is to vindicate themselves at the major marathon events of the plains. “ This is the avenue they have,’’ Savio said. He hopes the national camp selectors are watching these events. “ Hope’’ – that is the word he used. He saw the tough field his trainees faced at 2018 TMM as a necessary learning; part of the journey.

The team at Priyadarshini Park, with other runners (Photo: Shyam G Menon)

According to Savio, as dwellers of altitude, athletes from Ladakh have endurance. What they lack are two things. First, they need to get used to competition and competition in the elite category can be quite tough. “ There can be no comparison between how well I can train them using whatever I have at my disposal and how well an athlete in the national camp is trained, given the superior coaches and facilities they have,’’ Savio, a former national marathon champion himself, said. Second, the Ladakhi runners have to improve their speed. A significant drawback here is that Leh does not have a running track. “ Speed training on roads is not good for the legs. Roads are hard surfaces. If you don’t have a proper running track, you need at least a mud track. That’s what we are trying to locate in Leh so that once they go back to Ladakh these runners can continue their speed work-out. On my last visit to Leh, we shortlisted a couple of locations,’’ Savio said. For the interim, there is Mumbai’s Priyadarshini Park.

As marathon coach, Savio perceived other limitations too restricting runners’ progress. “ We need a few more races in Ladakh spanning a mix of distances from 10K and up. This will get more young Ladakhis interested in running,’’ Savio said. But even if you do that, it addresses only part of the issue. Once they finish their twelfth standard, most Ladakhi youngsters shift to Jammu, Chandigarh or Delhi – all at lower altitude – for university education. Ladakh does not have good education infrastructure. Although born to the mountains, a mountain dweller, if he / she stays away from the mountains for long, takes a while on return to altitude, to acclimatize and regain peak performance. Savio believes that if you are a competitive runner, one targeting national camp and so on, it makes sense to be in Ladakh, studying and training; not away from Ladakh losing a vitality the region gifts you. Most of the runners reaching Mumbai from Leh have been podium finishers at the Ladakh Marathon. “ If he goes back right now and runs the Ladakh Marathon, he may not get a podium finish. He has been away from Ladakh for a long time,’’ Savio said pointing to one of the trainees and highlighting in the process, the two distinct environments that need to be managed for Ladakhi runners to succeed.