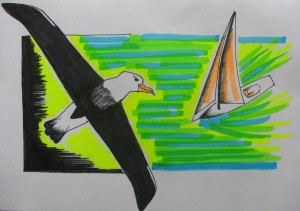 Specific to the navy, Sagar Parikrama’s impact may be threefold. First, greater interest in sailing in India automatically means bigger share than before in the civilian mind for the navy. This is helpful for recruitment and goodwill. Second, the average navy sailor imagines his theatre of operation in terms of his own country; the country’s immediate seas, his ship and given mission. Now there is a larger awareness brewing in the navy of oceans and weather patterns beyond. Not to mention, a proven example that Indians in a sail boat can endure what the seas throw at them. Third, solo circumnavigation is all about endurance. The typical sailor in our navy considers 15-20 days at sea as long. The circumnavigation voyages by Donde and Tomy lasted months. That’s proof of what is possible; it can inspire mindset change. “ I want to see an Indian circumnavigate Antarctica. The conditions there would be trying – ice floes; icebergs, cold temperatures, high seas and winds,’’ Awati said, gazing seaward. For him, Sagar Parikrama is the beginning of a revolution, a revolution of Indian mindset by the sea.

Centuries ago, powered by sail, the Indian east coast had spawned empires that touched South East Asia. In Beypore, Kerala, building wooden ships called the ` Uru’ has long been a traditional art. `Suhaili,’ the wooden ketch in which Sir Robin circumnavigated the globe, solo and nonstop was built in Mumbai, mostly at a yard then called Colaba Workshops. Now with Mhadei, the boat used for Sagar Parikrama, built by Aquarius Fibreglass, Goa, India has proven competence in fibreglass boats. We are the world’s biggest democracy with a coastline of over 7500 km, a history of maritime trade that stretches back to well before Christ, and a track record in fine boat building. Yet civilian interest in sailing is abysmal compared to the length of India’s coastline and its population.

In many adventure sports, the armed forces led the way in India. Reasons for this could be several, but mainly two. First, there is general aversion to adventure – call it zone of discomfort – among Indians. Decades ago, the religious taboo attached to crossing the seas made anyone going overseas impure. Nowadays, it is over-protective parents and their reluctance to accept anything risky. This plagues even the armed forces. Awati recalled his days as Commandant of the National Defence Academy (NDA) when parents would object to certain exercises he introduced saying it was dangerous. “ My standard reply to that was – if not now, your boy will face it later, so why not now and get used to it?’’ When Donde was sailing, ahead of him in the Pacific Ocean was Jessica Watson, a young Australian, yet to turn 17. Her circumnavigation was questioned by purists based on a technical flaw; she failed to connect two antipodal points on the planet, which some people consider a must for pure circumnavigation. Notwithstanding these critics, her solo voyage around the world – from Sydney to Sydney – at that age, remains a fact. It is certainly debatable whether she should have circumnavigated when still so young but contrast her backdrop with the average Indian life – her family lived on a boat for five years, the children being schooled via distance education as they sailed.

Second, in direct proportion to how the majority obsesses with well settled life, our armed forces are seen as the ones enshrining qualities that the rest lacks. In our compartmentalised view of society, the forces are licensed to adventure. Vicariously, they complete us. Third, capital used to be a major problem. Expeditions are capital intensive. Even today civilian expeditions struggle to find resources. For the armed forces, it is a case of approving project and sanctioning budget internally. Compared to scattered resources in the civilian realm, the armed forces represent focussed delivery.

With economic liberalization and rising affordability levels, civilian participation in adventure sports is now slowly rising in India. Bulk of it hardly delves deep into what adventure is. In fact, taken to its extreme as philosophy, adventure even shuns the media and the world, preferring its own trajectory. Moitessier is great example. He no doubt tickled the media with his eccentricity. But he sailed on his terms. One of his sentences from the voyage, rivets, “ I no longer know how far I have got, except that we long ago left the borders of too much behind.’’ Moitessier seems the hermit of the seas; at home on it. Past Cape Horn, Tomy said, he had a spell of depression and went drifting off northward in the Atlantic. He knew the remaining eastbound leg was a sail home. He didn’t want that. He wanted to keep going. Or sample what Peter Nichols says about Sir Francis Chichester. According to him, by the late 1960s, trans-Atlantic sailing races resembled motor racing. It had become the turf of young sailors, the races were very competitive. With competition the races became expensive, teams splurged on ever fancier boats. The importance of sponsors increased and with it sailing became the ability “ to navigate the tide rips and currents of commercial sponsorships.’’ Sir Francis and others like him sought a different canvas. In 1966, he sailed off the competitive confines of Atlantic racing and circumnavigated the globe with just one stop; Sir Robin took it to nonstop. Can we get the essence of sailing, across to an Indian audience without loss in translation? 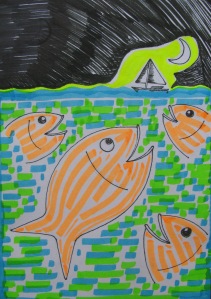 Sailing is much more than sailing to win a race. As you research route, weather conditions and prepare for voyage – it becomes an exploration of life and the planet. It is education. Awati lives in Satara. He likes to talk of a school student there, who tracking the Mhadei’s journey, could tell the retired admiral the names of all the three great capes correctly. Or sample this – a fine example of what a good old fashioned adventure, cast the classical way can inspire people to do. On hearing of Swapnali Dhabugade, I requested her for a chance to meet. We talked over a cup of tea at a cafe near Vashi station. A cost accountancy student from Mumbai, Swapnali read about Sagar Parikrama in mid-September 2012. She isn’t sure what caught her fancy but suspects it was `solo,’ a situation so different from the average Indian life crammed with people. Intrigued, she got in touch with Tomy, travelled to Goa with her friend Mugdha Chavan, went aboard the Mhadei, then visited Aquarius Fibreglass and met Ratnakar Dandekar. In mid-December she met Donde. She attended Sir Robin’s lecture at the Maritime History Society. With help from friends and family, Swapnali pieced together a ` Sagar Parikrama Awareness Programme,’ primarily for secondary school students as the voyage fitted in well with geography classes at school. She and her friends made 17 presentations in Mumbai and Jalgaon reaching out to 2685 young people, many of who subsequently tracked Tomy’s blog. Schools covered included the 100 year-old King George School where Awati is alumni. The navy responded, presenting a letter of appreciation to the whole team. In April this year, Swapnali took her interest further ahead, doing a basic course in sailing from a private sailing school.

To be the popular movement Awati hopes Sagar Parikrama will be, then whoever pushes it – navy or otherwise – will have to imagine a transference mechanism for the idea of sailing; one that is broad-based and adequately contemporary. Today’s society is diverse in terms of who wants to learn something, when they wish to learn and how they learn. Even the same person learns differently at different stages in life. Anyone who can learn a bit typically aspires to go the whole hog if the bug bites deep enough. The Himalaya has a total length of 2500km. India’s coastline is three times longer at 7500km. Sailing’s vast playground makes it a democratic urge, brings it closer to running an outdoor club, in terms of ideal operating ethic. Currently India’s yacht clubs – some of them teach sailing – are elite addresses, carried over from the colonial era or newly created for fashionable social apartness. A few private sailing schools have opened. There is also the National Cadet Corps (NCC). If Sagar Parikrama inspires at large, then sailing will face the same crossroad as mountaineering in India did – should it grow top-down with regulation and bureaucracy (as mountaineering chose to) or should it foster enthusiasm at ground level (as running and outdoor clubs did), work to make sailing popular?

Awati said, “ top-down won’t work.’’ Tomy however emphasised the need to retain aspiration. Asked if making the sail boat cheaper is central to popularising the sport, he quipped, “ do you think if boats are affordable people will sail?’’ According to Tomy, sail boats have become affordable with India’s economic growth but more importantly, you must want to be a sailor. The sea should catch your fancy. There is no substitute for that; it is what makes you aspire. Tomy has a point for beyond constraints of affordability, there is a fundamental urge – a curiosity for the medium – that has remained absent in India. Thus for instance, the Mhadei, while certainly vindicating Aquarius’s competence to the Indian Navy and thereby in vessel construction for military / paramilitary purposes, does not automatically open up business in sailing yachts for Dandekar. There are two to three reasons. First, sailing is very under developed in India with little civilian interest. So a big enough local market isn’t there yet. Second, the current market is for luxury yachts bought by the wealthy. For this group, it counts to say that their yacht was imported or built at some particular foreign yard. Third, thanks to our erstwhile economic controls, the trend of yacht-building shifting to new geographies as a matter of overseas enterprises seeking cost effectiveness, bypassed India and went to countries like Sri Lanka and Thailand. For now, Aquarius’s competence in yacht-building seems as much an island as Diwar. Looking down from your train window you may thus not see a great financial story. But for sure, that’s where the Mhadei was built, where history was made.  On their part, Donde has written a book on his voyage, while Dandekar plans a Sail Training Association with the Sagar Parikrama team.