Thakur Singh worried if he would make it back to Ranikhet in time.

Hoshiar Singh on the other hand, cracked jokes. Pratap Singh laughed. Nearby, the chain smoking-teashop owner from Kharkia lit a beedie and responded frugally to his talkative host, the owner of the teashop near Dhur.

We were seven or eight people; maybe ten. Some enjoyed the sun. Others idled within the teashop. All were stuck at that bend on an empty, winding road. The stillness of afternoon overcame December morning-energies. We grew quiet, progressively drifting to the wisps of smoke leaving the Kharkia-teashop owner’s lips as sole sign of life in us.

Just behind the teashop at the bottom of a cliff was the Pindar River. Up the valley, the chiselled summit of Nanda Kot, soared to over 6800m. The high ridge of Dhakuri, cloaked in winter’s first snow, wasn’t far off. But it was farther than before. That morning, we had traded the straightforward trail from Kharkia to Dhakuri and Song for the comfort of a jeep to Song. It was despite news at Kharkhia of a vehicle stuck in a landslide on the Kharkia-Song road. Mountain roads are unstable during rains and winter. Stranded in a gooey landslide, the driver had repeatedly tried freeing his vehicle only to see it sink deep. Night froze the mud cementing the jeep to position like a statue; a study in firmness for this otherwise infirm road. We drove up expecting to free the vehicle, clear the road and proceed to Bageshwar. We had along two jeeps to pull, ropes, steel cables, shovels, hired labour.  The labourers got tired of shovelling, the ropes and cables broke and the drivers got fed up. Maybe there was winter’s sloth at play. Add to that, a dash of hangover from the previous night. At least some of us, sleepy eyed and looking to get back to distant towns, had seen each other earlier at the marriage of a common friend in Khati. That village was an hour’s walk away from Kharkia, in the direction of the Pindari Glacier.

The jeeps from Kharkia returned home.

We walked past the landslide hoping that somebody would drive up from Song, discover the road block and ferry us back the forty odd kilometres of winding mountain road to the beginning of the descent to the foothills. But some of the vehicles plying daily were stranded on the Kharkia side of the landslide. That meant fewer jeeps to service the road. We flopped down at Dhur’s teashop to take stock of the situation. Past Dhur was a less used, longer trail to the Dhakuri ridge. Song seemed possible, provided we outpaced winter’s early sunset. Thakur Singh and I pushed off. Five minutes later, we heard a whistle. Our departure had shattered the group’s ennui. All except the Kharkia-teashop owner, who was Bageshwar-bound to treat an injured leg, had decided to hike. They were following us. We walked for a long time. Then as often happened, a lovely patch of grass emerged by the roadside and people plonked down to rest. It was officially called rest; unofficially, it was that couldn’t-care-less attitude which seeps into people in such situations. Time and life ran slowly in the mountains. I wasn’t in a hurry to get anywhere, certainly not when my backpack contained snacks and tent. I had a stove but no fuel; I had gifted the remaining petrol to a villager who owned a motorcycle. But finding food shouldn’t be a problem. I was at ease. Among us, only Thakur Singh was edgy. He was on leave and had to get back. He tried sleeping to keep the worry at bay. Hoshiar Singh had weathered slit eyes. Like Clint Eastwood’s. Where Eastwood’s `Blondie’ aka The Man with No Name smoked a cigar, Singh idly chewed a blade of grass, his eyes looking into the distance towards Sorag on the other side of the Pindar. Then some conversation came up and the dreamer in me started nudging talk towards how mountains were formed, how long day and night could be in the polar regions, what lay ahead for the sun, how the universe was formed – so on and so forth. All listened intently, except for a youngster studying in a college in town who had traded larger curiosity, for world by relevance and irrelevance. Of what use are the sun’s life cycle and Big Bang Theory when it comes to career? Time went by.

The road from Song to Kharkia was a treacherous one. Roads in unimportant corners of India were like that. What’s special about this road? You may ask. I don’t know what its current state is but until the time of writing this article, in the years (probably three) that I had been on it, this road’s condition never changed although it was part of a national scheme for village roads and an adjunct to the much walked tourist trails to Pindari Glacier and Sundardhunga. For villages in the area – Kilbara, Badiyakot, Pattag, Sorag, Wacham, Jatoli, Khati – it was sole road link to the outside world sparking hopes ranging from higher education to timely healthcare. Completed some years ago, the rickety road’s only permanent fixtures were a big concrete gateway erected midway to deify the builders and the utter absence of bitumen. On a lucky day, the road may be fully functional. On others, it may be blocked or damaged. For much of its length, it hugged the mountain’s edge. It was largely wide enough for two vehicles to pass, but only just so. It was also narrow, muddy and riddled with cavernous ditches. Seeing your vehicle’s trajectory and poise, you wouldn’t know whether you were driving, sailing or skiing.

Jeep drivers from Kumaon’s towns rarely brought their vehicles here fearing damage. A few times up and down this road and your vehicle aged prematurely. Local drivers worked this road using cheap vehicles, pushed daily to the limits. Taxis were filled with people and stuff. During the ride you stared down the vehicle’s bonnet into an approaching ditch; you shook violently climbing out from it, the chassis would hit the road and occasionally you skidded along in mud inches from the void. It was regular village life – forty plus kilometres of bone-rattling ride. When a jeep came from the opposite direction, the driver sometimes startled you by requesting for brake fluid or something as critical, which you thought was already there in the machinery. The request and the supportive camaraderie were routine given the punishment inflicted on vehicles. Once, on a day of no taxis, I travelled the whole stretch in the cargo bay of a pick-up truck. I understood what life as a chassis was. As yet, my most unforgettable sight on this road has been a heavily laden small truck that stalled while struggling uphill. On re-start it reversed and then charged up the terrible road, including its hairpin bends as not to lose momentum. The truck shook and twisted; its tyres hit and flew over stone, it roared straight towards my parked taxi and veered off with fine timing. One error and we would have been history. That was 2012 summer. Now, it was December. The road, as ever, was unchanged. Probably the truck too is; lying in some workshop, almost dead from exertion. 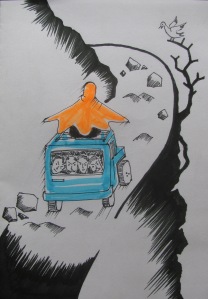 An hour or more after we left Dhur’s teashop, a pick-up truck brought us news that taxis were heading up. By 4PM, we had a jeep for Song, hopefully beyond. We crammed in. “ Naren’’ (likely short for Narender) who couldn’t fit within had to take the vehicle’s roof. His friends kept up a conversation to distract Naren from the December cold blasting him up there. Once in a while, to the amusement of his friends, Naren howled or yelled to stay awake in the freeze. Sometimes, he sang loudly from up there. Thanks to the delay caused by the blocked road, we didn’t reach Bageshwar. We stopped at Bharadi. Naren jumped down from the vehicle’s roof, playfully shouted a few expletives at the driver as everyone laughed, and ran off. I took leave of Hoshiar Singh who had been a nice person to talk to. Bharadi was a proto-town ahead of the real town, Bageshwar. Its facilities weren’t fully evolved. Four rooms at a hotel; seventeen beds, fifty rupees per bed, one toilet and the usual inebriated men. Pratap Singh was in the room adjacent to mine. He was en route to Almora for surgery. Had it not been for our road Singh would have had to walk to Bharadi.

Few days earlier, we were in a jeep from Bharadi to Pathyasar beyond Song, the end of the road for the Saryu valley. Our co-passengers included half a dozen or so village elders. From Song to Pathyasar runs another rickety road, belonging yet again to that national scheme and about as bumpy as the road to Kharkia, albeit shorter. The conversation in the vehicle had been on how all political parties are similar in their indifference to the public’s travails and how the rule of different parties in Uttarakhand had yielded the same result for this region – the continued neglect of roads. Maybe they are right. “ If you see a JCB tell them of the stuck vehicle,’’ one of the Kharkia-drivers had told me while parting ways at the landslide. Albeit manufacturer’s name, JCB had become near generic for bulldozer in these parts.

I never saw a JCB.

(The author, Shyam G Menon, is a freelance journalist based in Mumbai. An abridged version of this article was published in The Hindu newspaper.)