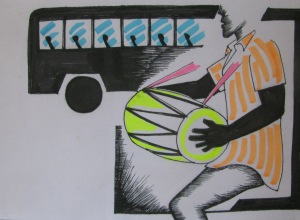 Some years ago, a friend from Ladakh and I, were on our way from Uttarkashi to Delhi.

We travelled to Rishikesh in a packed jeep and from there, took a bus to Haridwar.

Upon reaching, we found that there were no buses just then to Delhi.

Trains were full and the only available tickets required patronizing the black market.

We decided to wait for a bus.

The bus station was the regular sort – dismal. It was located opposite Haridwar’s railway station and therefore in a rather busy part of town. We briefly walked around in the neighbourhood, had tea from a roadside vendor before the railway station and then settled down to wait at the bus station. These are the occasions when you indulge in India-watching. What’s that man doing? Isn’t that woman beautiful? Those people, dressed that way – where could they be from? What’s that vendor selling? Why do people have so many children? So on and so forth. I wondered what my Ladakhi friend made of the Haridwar environment, thick with people. Ladakh was vast desolate mountain landscape with few people. It was cold desert. As one of the least populous districts of India, his land was the absolute opposite of this congestion at the foothills of the Himalaya, where the plains lapped innocently at mountains’ feet not yet betraying the ocean of troubled life beyond the teasing waves. As you went more and more into the plains, crowd and congestion rose till India became crushing reality of huge population struggling for resources. Yet we never speak of our numbers. I had just begun freelancing then and in the years that followed, I would discover how averse even the Indian media was to being reminded of population as anything but market and potential GDP.

A bus, clearly not state transport type, drove into the station and stopped. A troupe of youngsters got out. One of them carried a drum. Ten minutes later, a street play ensued in the bus depot. It was on safe sex, HIV, population, family planning and so on. The people around watched, amused. Women pulled their saris over their faces and laughed shyly. Until some years ago sex was too touchy to discuss publicly in India. Babies happened. And when babies were a more conscious choice, it was packaged as human fulfilment, even cultural expression. Either way, every census returned more numbers of us. Who cared if we were drowning in all that fulfilment and expression? The street play went on for a while. When it concluded, the artistes treated themselves to tea, packed their props and returned to the bus. It drove off to new location somewhere else.

They showed the courage to address something terribly important to India and grossly neglected by everyone from government ministers to common people. I also remember feeling sad – for nobody and by that I mean nobody, will ever tell those young people how critical they were for public awareness. In contemporary Indian imagination only losers do what those youngsters did. Winners find profitable careers; make money, have babies, leave India – so on. When aspiration is the stuff of escaping the drowning, who wants to plug the deluge? If you want to do anything sensible, you must be prepared to live with the stigma of being loser. I hope those young men and women find the resources to endure it.

The bus to Delhi arrived.

From Delhi, my friend left for Ladakh.

I returned to Mumbai.

Recently, Business Standard – a well known Indian financial newspaper – reported on an Oxfam study alerting the world to the average price of staple foods like wheat and maize doubling worldwide by 2030 (http://www.business-standard.com/article/markets/world-stares-at-doubling-of-food-prices-by-2030-113101501088_1.html). Some of us may find that too conservative, for in our own lifetime we saw prices shoot up more. The scorching price of onions was top news in India some weeks ago. Anyway – average prices doubling globally was Oxfam’s estimate and they attributed the scenario to a host of factors ranging from climate change to high population, falling productivity in agriculture and cultivable land diverted for crops other than food courtesy market forces. The main cause and probably the most immediate of all causes cited, was climate change. But think a bit and you will see behind it, the ways of a giant population. We and our ways worldwide contributed in no small measure to climate change. We can’t dissociate ourselves from adverse weather phenomena. We cannot also dissociate ourselves from the ways of the commodity markets. Today on the planet, we are a global population of over seven billion people plus the habits and aspirations of that many. We will exceed nine billion people globally by 2050. Our demand for food is projected to rise by 70 per cent. As yet, we don’t seem to have good enough answers or leadership for what potentially lay ahead. The forecast on sharp rise in food-demand is when we don’t have the will despite our existing predicament, to stop the rotting of food for want of proper storage. Not to mention, each one of us thinks we deserve family; the undeserving is someone else. The big picture engages none. Maybe, it exhausts everybody. The price of continued disinterest in the big picture can be steep. It isn’t about food alone. It is also about what people will do to get food; the potential for conflict therein.

Nobody wants to lose tackling a difficult truth.

I wonder where those youngsters are.