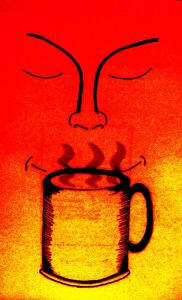 Several months ago, we were walking around Matunga in Mumbai when near Madras Cafe and Mysore Cafe we hit a zone filled with the aroma of filter coffee.

I could have tracked the aroma like a sniffer dog to the origin.

Imagine a man sniffing so and finding his way straight into a cafe, onto a chair, maybe all the way into the kitchen, into the coffee section and right next to the person making coffee. The person turns around and finds a face close to him that is all nostrils flared to smell and eyes shut contemplating visions inspired by the aroma! Startled – depending on his nerves, that may be an understatement of likely reaction. Like many good things in life monetized by man to beyond reach, coffee too is increasingly the stuff of world apart. Tracking coffee’s aroma could mean invitation to puncture your purse handsomely. These days, memories of my airport nightmares with coffee intervene and discipline the olfactory excitement. A cup of coffee costs over a hundred bucks at the airport. For no good reason save long held perception of air travel as sign of success – that’s the tragedy. Bigger tragedy is that there are people willing to, often craving to, indulge such imagery.

The aroma of coffee at Matunga first reminded me of the tricky airport. Then, it provoked anticipation of fancy coffee shop packed with youngsters enjoying more pocket money than I earned as income. We called it new India. Time to look away – I told myself. That was when I saw a board on the pavement saying `kaappi,’ which was how coffee was called in South India, where the brew had traditionally been popular. “ Hold on,’’ my senses ordered, checking the airport imagery. Board said ` kaappi’ not `cappuccino.’ It felt encouraging. This was probably an entrepreneur yet untouched by new India or someone defiantly opposing it, a revolutionary of the old order still fighting for the cause of affordable `kaappi.’ I went closer; a smaller sign within the shop said: introductory offer – filter coffee for ten rupees.

Red flag in the face of the airport bull!

The shop was just a few days old. We settled into our chairs, appreciated the ten rupee-coffee and took in that outpost of a rapidly fading world. In my head a revolution bloomed. From that shop a movement for cheap coffee shall roll out onto the streets of Matunga, spread across Mumbai, shame those vendors at the airport and eventually warm a whole world. There was something fundamentally wrong in pricing the basic things of life so high and then calling it economic growth. I asked the young entrepreneur how much he would sell the coffee for, once the introductory phase got over. “ Maybe fifty?’’ he mused. I nearly spilled my filter coffee. Then I reasoned – revolution in new era would be different, pricier. Besides, fifty was better than hundred. In the preceding months, inflation having routed India’s ten and twenty rupee-currency notes had begun gnawing away hungrily at the edges of fifty, sending shivers down the spine of a hundred. Fifty rupees seemed okay although it made you wonder how expensive life until then would seem if viewed at current cost. Years ago at home in Kerala, I would ask for coffee or tea and it just appeared; no questions asked. Thousands of rupees had gone into keeping me alive. My parents must have struggled. Given our new consumerist ways, millions were probably going into keeping a new generation alive. The same way I never thought of all this when growing up, I am sure today’s youngsters don’t think of all this.

The aroma of coffee at Matunga first reminded me of the tricky airport. Then, it provoked anticipation of fancy coffee shop packed with youngsters enjoying more pocket money than I earned as income. We called it new India.

I resumed sipping the brew.

The shop was tiny.

If I walked six paces I would hit the wall.

“ Can’t you price a big cup for fifty and retain a smaller cup for ten, even twenty?’’ my friend asked.

“ That’s possible. But we have to pay forty thousand as rent here,’’ the young man said. I am recalling that figure from memory. Take it as near about.

A populace roaring “kaappi, kaappi’’ was replaced by a muffled `kaappi’ lost amid roars of `cappuccino,’ `espresso,’ `Ethiopian,’ `Columbian’ and imported what not. The idea of `kaappi’ won’t lend itself it to ridiculous pricing to cover costs. The idea of fancy coffees will. That’s why they proliferate, even if it meant drinking the unfamiliar and saying: wow! I knew that everywhere in India, the beast of real estate lurked nearby. But still – for the sake of that young man, I felt like telling the beast, “ come on man give us a break!’’ I felt ashamed of the legacy of my generation; even that of my parents’ generation.  No matter what the reason, what legacy is it to have the beast shaping every step of the way? In India real estate was an absolutely cynical equation constantly benefiting from the country’s immense population. Packaged as great investment, it is essentially the cynical endorsement of a fundamental truth you need no brains to gauge. With so many standing on it, land automatically turned precious in India.  A roof above your head became a race with one’s purse, the needs of others and the speculation and avarice of more others who saw it as opportunistic investment. These trends shaped imagination and an Indian life had become the stuff of living by such opportunistic imagination. You could almost say – to be born, was to immediately abet opportunism for you represented a new set of wants in what was already a casino of wants. What legacy is it to suck the world clean of enjoyable life leaving mercantilism behind? Like residue on a kitchen sieve, a boring mercantile mentality would be the residue of our times should somebody sieve our existence.

I felt sorry for the young man. He wanted to serve us coffee. We wanted it too. It was such a simple thing. But all of us – customer and service provider – seemed alive in the wrong time for simplicity. The young man looked trifle uncertain as my friend quizzed him of plans ahead. “ Maybe I will sell fruits alongside. No; idli, vada and upma, some cookies too. I have a kitchen,’’ he said pointing to what seemed no more than a small stone slab fixed to the side wall. He had forty thousand to pay every month; plus raw material cost, labour cost and then, hopes of own income. It was a tall order. He smiled as he spoke. We smiled encouragingly.

Before we left, we wished him luck.

I felt sorry for the young man. He wanted to serve us coffee. We wanted it too. It was such a simple thing. But all of us – customer and service provider – seemed alive in the wrong time for simplicity.

I wondered what the beast sipped – coffee; tea, cocoa, hot chocolate? If it had shape, I would have hit it with whatever I had – my bag, umbrella, whatever. But I knew that the beast would only be amused. It would turn around and ask, “ why hit me when self flagellation is what you need to do?’’ Outside the small shop, we melted into the evening’s whirlpool of people and traffic at King’s Circle. It resembled the swirls in a giant cup of frothy brew, stirred with spoon for someone to drink. I could imagine the beast readying for its invigorating, daily sip of crowded, congested us. We were its affordable ` kaappi.’ Thanks to us, its ways seemed guaranteed.

A week ago, I walked by the same place in Matunga.

Neither young man nor coffee shop was around.

(The author, Shyam G Menon, is a freelance journalist based in Mumbai. A smaller version of this article was published in The Hindu Business Line newspaper.)