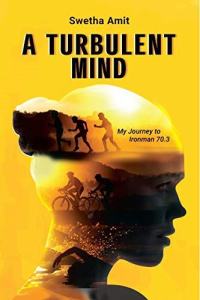 This image of the book cover was downloaded from the Internet and is being used here for representation purpose. No copyright violation intended.

It was sometime in 2010 that Swetha Amit got her wake-up call. A journalist and writer in Mumbai, hers hadn’t been a disciplined lifestyle. She landed up in hospital. The diagnosis: ulcerative colitis.

The year 2011 was spent recovering and getting back to a healthy existence. Swetha’s husband, Amit Sridharan was training for the half marathon of the 2012 edition of the Mumbai Marathon. She joined the training program. Alongside, she worked on recasting her diet to a healthier option and completely quit eating out. The changes complemented the gym routine she had already in place since a few years earlier. That year – 2012 – she successfully completed the half marathon at the annual Mumbai Marathon.

Her transition to a healthy lifestyle helped her immensely. The very next year, she attempted the full marathon. “ It was a gruelling experience. We had no formal training plan. We just followed the Hal Higdon training plan available on the internet. Back then, we didn’t even GPS enabled devices and such,” Swetha said. Normally in running, transitioning to the full marathon is a journey in itself. Having dived into the full marathon rather early, Swetha nevertheless continued to run half marathons and races of varying distances. Training in Mumbai was fun; there was camaraderie among runners.

In 2017, Swetha moved to the US with Amit and their daughter, Samara. Amit had enrolled for a one-year programme at the Graduate School of Business, Stanford University. It took some time getting used to what the US had to offer. Swetha enrolled for creative writing courses at the university. She also decided to attempt the triathlon. Her journey from arrival in the US to participating in the Ironman 70.3 (half Ironman) is narrated well in her book, A Turbulent Mind – My Journey to Ironman 70.3. The book opens with the race day of Ironman 70.3 Santa Cruz (California) on September 9, 2018.

For Swetha, there were many issues to contend with before race day. Open water swimming was one of them. The book provides an overview of her trepidations, attempting open water swimming in swim clinics and at triathlons of short distances. A fall from her bicycle that nearly prevented her from participating in one of the triathlons and, later, taking a major decision to not participate in an Ironman 70.3 that she had initially registered for – feature among challenges dotting the journey. Over time, she found good training support for all the disciplines of the triathlon, in California.

Speaking to this blog in October 2020, Swetha said that her next step would be to work towards attempting the full Ironman, which consists of 3.86 km of swim, 180.25 km of cycling and a full marathon. “Right now, I am in the process of rebuilding my base,” she said. The lockdown caused by pandemic meant no access to pools and gyms. Swetha kept up her fitness routine at home; she was sometimes helped in this by online sessions organised by Mumbai Road Runners (MRR), an informal running group, one of the largest of its sort in Mumbai. Meanwhile, pools and gyms have re-opened in California but the process of building endurance is lengthy and will take time, Swetha said. Compounding the process has been the recent spate of wildfires in California; it restricts outdoor activity.

Shwetha’s book about her personal journey to doing a half Ironman is easy to read. It is structured well; it is also written well. It isn’t a primer on how to train for the triathlon and attempt it. That’s not the motive of the book. It works differently – it should inspire those wanting to try the triathlon. I enjoyed reading it. Hopefully, so do you. Try it.