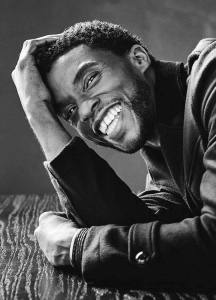 Chadwick Boseman. Photo credit: Sam Jones. This image was downloaded from the actor’s Facebook page and is being used here for representation purpose. No copyright infringement intended.

Among those who spoke at the function was Chadwick Boseman, the actor we all remember for portraying the comic book hero, Black Panther.

At the AFI ceremony, Boseman recalled the time Phylicia Rashad, his teacher at Howard University, contacted Washington for assistance in funding the studies of nine theater students who had been accepted to a summer acting program at the British Academy of Dramatic Acting in Oxford. Washington agreed to help.

“ As fate would have it, I was one of the students that he paid for. Imagine receiving the letter that your tuition for that summer was paid for and that your benefactor was none other than the dopest actor on the planet. I have no doubt that there are similar stories at boys and girls clubs and theaters and churches across the country where I know you have also inspired and motivated others. An offering from a sage and a king is more than silver and gold. It is a seed of hope, a bud of faith. There is no Black Panther without Denzel Washington. And not just because of me but my whole cast, that generation stands on your shoulders. The daily battles won, the thousand territories gained, the many sacrifices you made for the culture on film sets through your career, the things you refused to compromise along the way, laid the blueprints for us to follow. And so now, let he who has awarded be awarded, let he who has given be given to. It is an honor to now know you, to learn from you and join in this work with you. May God bless you exceedingly and abundantly more in what’s in store than he ever has before. God bless you,’’ Boseman says in the video available on YouTube. A teary eyed Washington listens.

It’s now time to remember the one who remembered to say the above.

The last film I saw featuring him was Spike Lee’s Da 5 Blood. Previously I had seen him in Black Panther and some of the films from the Avengers franchise. On Wikipedia, Boseman’s career in films spans 2008 to 2020. It was in 2016’s Captain America: Civil War that he essayed the role of Black Panther for the first time. It was his first film in a five picture-deal with Marvel. The 2018 film Black Panther would later cement his status; the film currently ranks fifth in Wikipedia’s list of the highest grossing superhero movies with over 1.34 billion dollars earned at the global box office.

News reports about Boseman’s demise mentioned that he had been battling cancer for the past four years. According to a brief statement on his passing, available on his Facebook page, movies like Marshall (2017) and Da 5 Blood (2020) were filmed in the period that he underwent surgery and chemotherapy. What I will remember him most for is the struggle and dignity resonant in the words he spoke at the 2019 AFI ceremony. It was easily one of the most graceful and touching speeches of that genre heard at award ceremonies. Among those present was Michael B. Jordan, Boseman’s costar in Black Panther, who essayed a memorable role in the 2019 film Just Mercy. In the AFI video, as Boseman concludes, the audience gives him a standing ovation. Roughly a year and two months later, he would be no more.