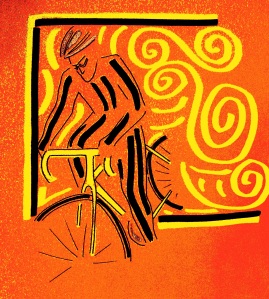 Late April 2020, authorities in Bengaluru formally approved cycling as a means of transport during lockdown. Here’s how it happened:

It is an honorary position awarded by a NGO called BYCS in the Netherlands. Its website describes BYCS as “ an Amsterdam based-social enterprise driven by the belief that bicycles transform cities and cities transform the world.’’ Volunteers apply for the post of bicycle mayor; they are screened, selected and appointed. There are around 100 bicycle mayors worldwide at present, including in several Indian cities.

As the city most representative of the IT boom that followed economic liberalization, Bengaluru sits in an engaging matrix. It combines old world charm and a wealth of educational and scientific institutions with the subsequently emergent trends of skilled, well-traveled workforce and the ideas they gather from various parts of the world. The city is one of the major hubs of the active lifestyle in India. It has a large community of cyclists, a regular calendar of races and is among the bigger bicycle markets. All that ground to a halt when lockdown set in. Along with the rest of the country, whatever norms for transport amid lockdown applied in Bengaluru, concerned motorized transport. “ It was extremely disappointing to find that there was no mention of the bicycle in directives from the Union Ministry of Home Affairs. They issued specific guidelines on how to be out in cars and on motorized two wheelers; there was nothing similar about bicycles. In the absence of specific mention of the bicycle in protocols issued, people were hesitant to take their cycles out for permitted outings like purchase of essentials. It was a case of nobody objecting but permission not specifically granted,’’ Sathya said. He wrote to the Home Ministry. Till the time of speaking to this blog (May 23, 2020), there hadn’t been any response.

Sathya’s first initiative during lockdown was a concept called ` Relief Rider’ under which, volunteer cyclists delivered medicines and groceries to senior citizens in various parts of the city. Relief Rider commenced operation on March 29. There was a phone number provided for people to call up and inform of their requirement. The cyclists brought the consignment to their doorstep. Within a month to month and a half, 75 cyclists under the program had pedaled over 1600 kilometers; a figure that can also be viewed in terms of that much less motorized vehicles used and pollution avoided. The program was tangible evidence to authorities on the merits of having a community of cyclists. It was time to take things a notch higher. Dr Arvind Bhateja is a prominent neurosurgeon in Bengaluru and Medical Director of the city-based Sita Bhateja Speciality Hospital. A keen cyclist, Dr Bhateja came to Sathya with a campaign called ` Reset with Cycling’ under which, the duo decided to submit a proposal to authorities recommending a few measures. Its gist was the following: 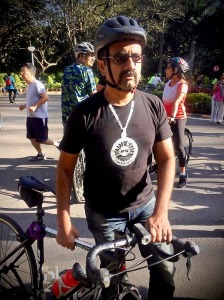 The website of ` Reset with Cycling’ introduces itself as a collective effort to revive cities post-lockdown. “ Let’s not go back to old habits. Let’s use the bicycle to reduce traffic, stress, improve health, air quality and renew our cities. Build a city for our children,’’ the website said. Sathya put the recommendations submitted, in perspective. Physical distancing has been identified as a major tool to combat spread of COVID-19. It is difficult to enforce it in public transport. That may serve as incentive to bring back private cars. In the months before lockdown, Bengaluru was notorious for its traffic jams while cities like Delhi and Mumbai experienced high air pollution levels. On the other hand, cycling allows for transport with physical distancing factored in; it is also healthy being a form of exercise. Further, when frenzied human activity on the planet temporarily ceased due to lockdown, the quality of air improved almost everywhere. “ In Bengaluru, pollution levels were down by 50-75 per cent. If upon relaxation of lockdown, we revert to world as it used to be and bring back motorized vehicles in strength, then we lose whatever gains we made,’’ he said.

Notwithstanding the merit in the proposal made by Dr Bhateja and Sathya, approval for it hinged on those in authority being sufficiently empathetic. Having administrators, who understand new lifestyle trends, helps. According to published news reports, it was in August 2019 that Bhaskar Rao assumed charge as the Police Commissioner of Bengaluru. He is a cycling aficionado. On April 25, 2020, Rao was shown the proposal submitted by Dr Bhateja and Sathya. That same day, he sanctioned permission for cyclists to be out on city roads. Authorities are studying some of the other recommendations. The Police Commissioner’s decision was welcomed. “ I don’t recall any opposition from the public to the move or reluctance to embrace it. During lockdown there had been mental issues and domestic problems. Cycling provided a means to gain relief from all that besides addressing practical transport needs,’’ Sathya said.

Meanwhile in some other parts of the world – as reported earlier on this blog – the pandemic and its subsequent need for physical distancing fueled steep rise in bicycle sales. Realizing that public transport would be challenged to offer physical distancing and not wanting a complete return to the earlier paradigm of motor vehicles and air pollution, some foreign governments have unveiled bicycle-friendly policies and investments to improve cycling infrastructure. Sathya said he has more plans for Bengaluru.

Update: In its order dated May 31, 2020, concerning guidelines for easing restrictions and phased opening of lockdown, the Maharashtra government has permitted the return of outdoor physical activities like cycling, jogging and running in non-containment zones from June 3 onward. No group activity is allowed; only open spaces nearby or in the neighborhood may be used and the activity will have to be between 5AM-7PM. “ People are actively encouraged to use cycling as a form of physical exercise as it automatically ensures social distancing,’’ the order said. All physical exercise and activities must be done with social distancing norms in place. The order said that people are advised to walk or use bicycles when going out for shopping. The above is a condensed version; for a complete overview please refer the actual government order.