This image was downloaded from the Facebook page of the 2018 movie. No copyright infringement intended.

A film with two good actors.

One of them, I was already familiar with from earlier movies watched.

I had seen Ben Foster in the 2007 film ` 3:10 to Yuma’ and the 2015 movie on Lance Armstrong, ` The Program.’ I knew what to expect. Thomasin McKenzie was an unknown quantum. I hadn’t seen the 2014 concluding installment of ` The Hobbit’ trilogy or ` Jojo Rabbit’ of 2019. Seeing her confidently hold her place next to Ben Foster and in some ways, even set the tone for the lovely film I was watching, was a lesson in grace. The film was ` Leave No Trace,’ released in 2018 and since, highly acclaimed.

The film revolves around a father-daughter duo, who elect to live away from human settlements. The father is a war veteran with Post Traumatic Stress Disorder (PTSD); regular life is tough for him to endure. The daughter is home-schooled. She has a sense of awareness, sensitivity, independence and responsibility that can only be described as advanced for her years. They make their home, camped unseen in the depths of a forested park. It is illegal to do so, on public land. They take care to keep their presence invisible to others, except a few similarly camped on the periphery, who Will (the character played by Foster) sells painkillers to. 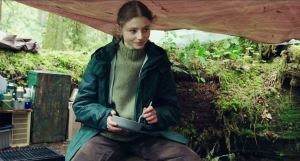 Thomasin McKenzie in Leave No Trace (This photo was downloaded from the Facebook page of the movie. No copyright infringement intended.)

The cocoon is disturbed after the daughter is noticed by a visitor. Authorities intervene. As the film illustrates the difficulty faced by the father-daughter duo trying to integrate into society as authorities wish them to, you wonder – why can’t otherwise peaceful people be left alone? The question becomes even more relevant as investigation by authorities reveals that the daughter has been brought up well. It becomes less a case of abnormality and more of incongruity with world as we know it. At the same time, it is also clear that the extreme lifestyle of the father-daughter duo is not ideal. It has its shortcomings and the daughter’s progressive choices reveal the balance with settled life she personally seeks; it is an equilibrium different from the harsh ethic pursued by the father escaping PTSD. It is a very reflective film; one that will be enjoyed in proportion to how much leash you gave yourself to question life.

Directed by Debra Granik, the movie (I saw it on Netflix) is affectionately shot. The two lead actors have done a brilliant job. Not having seen her work before, I found myself reading up on Thomasin McKenzie after watching ` Leave No Trace.’ She is without doubt, a major talent. As Will returns to life in wilderness, he is seen on the trail and then veering off it into the surrounding vegetation. It is an aerial shot that includes in its frame the sprawl of nature. The leaves and branches shake a while betraying person who stepped off trail. Then, the canopy reverts to what it was – a calm, green, cover; its secrets secure within its fold.

This is a beautiful film. See it.