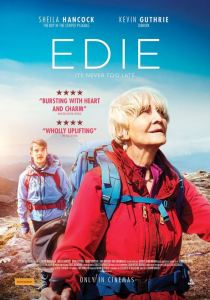 This image was downloaded from the Facebook page of the film. No copyright infringement intended.

There is life, and then, there is how you should live life.

The first is a blend of existence as it is and world as perceived by our sense organs. The second is a blend of individual sensory perception and opinion from the human collective; in fact, more of the latter. Most of us get entangled with the second approach. We are busy living life as it should be lived. Till one day, you wake up and ask yourself: what did I do to my life? My one shot at existence?

That one day came to octogenarian Edith (Edie) Moore in the phase following her husband’s demise. Her daughter, with whom she has a strained relationship, plans to shift Edie to a retirement home. The elderly woman resents it. The juncture invites reflection. Following a wild childhood that she thoroughly enjoyed in the company of her father, Edie had got married to George, a man with a very controlling nature. Thanks to him, she had been unable to go on a climbing trip with her father to Suilven, a mountain in the Scottish Highlands. Two days after their argument on the subject, George got a blood clot that rendered him invalid; “ he never walked or talked for thirty years until he died. And dad died not long after George had his stroke. So that was that, I never went.’’ Edie took care of George and her daughter but in the process, was denied her own life. Now in her eighties and beset with her daughter’s plans for her, the widow decides to take up that old trip to Suilven.

It is a beautiful film with Sheila Hancock in the role of Edie and Kevin Guthrie (remember him from ` The English Game’?) as Jonny, a young man who offers to lead Edie up the mountain.  What makes this film particularly meaningful is the way the narrative mixes straightforward story telling with contemplation on what happens to us in life. Sometimes the choices we make, hijacks our journey to the expense of all other possibilities. This is what happened to Edie in her younger days. She was reduced to being care giver and taken for granted. In her old age, she is a concoction of the rage in discovering that her best years were wasted, the frustration of being unable to feel young again (and be honorably treated while trying it) and eventually, the delight in undertaking an almost monastic pilgrimage to Suilven, a motif capable of restoring dignity to her existence. This is not an outdoor film in which, the rules of wilderness are strict and unflinching. There is an element of affection for the main protagonist, a sense of nature and heavens being supportive. But it doesn’t matter for the underlying warmth and compassion of this movie shot in great landscape, is refreshing.

This is a good film to watch (I saw it on Disney-Hotstar) especially in these days of lockdown due to COVID-19. Stuck at home and counting the hours, we have been reflecting on life. There is an Edie in each of us, seeking release.