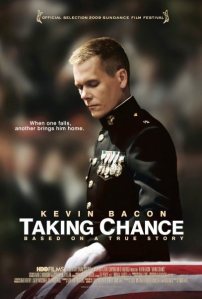 This image was downloaded from the Facebook page of the film. No copyright infringement intended.

I had no expectations when I clicked on ` Taking Chance’ on the streaming platform, Disney-Hotstar.

I was well, taking a chance.

The 2009 television film was based on a true story. It portrays the experiences of Marine Lt Col Michael Strobl as he escorts the body of fallen Marine PFC Chance Phelps (posthumously promoted to lance corporal) back to his hometown in Wyoming from the war in Iraq.

Aside from a black screen with just audio betraying the sounds of war at start, there is no depiction of war in the film. It is all about chronicling the movement of a body accompanied by escort to its eventual resting place at a cemetery.

Kevin Bacon as Lt Col Strobl speaks only as needed. If you didn’t know the actor from earlier films, the movie would have felt 80 per cent like a documentary, which it is not. It is a recreated account, filmed almost like a documentary and the effect of that economy in narrative style and idiom is stunning.  On the one hand, it is a truthful representation of how the body of a fallen soldier is escorted home in the US. You see the attention to detail as the body is made ready for transport at the mortician’s. The film’s story is also a bit extraordinary for it is not routine for the body of a PFC to be escorted by an officer. Lt Col Strobl volunteers for the job and the journey becomes an insight – for protagonist and audience alike – into how the civilian environment responds. At every juncture people seem quick to understand; they know protocol, they display their concern for the military, show their respect for fallen soldier.

For Lt Col Strobl, the journey also serves as opportunity to reflect because unlike the soldier he is taking home, following action in the First Gulf War he had asked for and got a desk assignment in the US to be close to his family. He feels ashamed of that and admits the same to a veteran of the Korean War he meets in Wyoming. The latter tells him not to feel so; he is as good a soldier as the one who lost his life in the line of duty and there is nothing to be ashamed of in loving one’s family. The revelation for me in this film was about how much set traditions tell stories by themselves. You don’t have to wrestle with life and squeeze out a narrative. Sometimes, life speaks. All that the film maker has to do is listen and document. The resultant idiom is frugal and apolitical. That is what makes ` Taking Chance’ brilliant. There is no question of the film having conveyed anything except what it said. It is a passive form of film making – maybe even an active choice to stay passive – and won’t meet the requirements of every story. But after years of the media squeezing out stories from life, this approach felt refreshing, relaxed and dignified.

` Taking Chance’ will remain one of the best films I have seen in recent times; recent because I was seeing it more than a decade after it was released. Besides the very structure and production quality of the film, there is another reason for my feeling so. The film is proof of the power of economy in military narrative. People love their soldiers. They always will. You don’t need to remind them. Civilians live ordinary lives. But as Lance Corporal Chance Phelp’s journey showed, they will emerge from the woodwork to honor the fallen.