The Ultra Trail du Mont-Blanc (UTMB) is among the most coveted races in the international ultra-running calendar. It is a difficult race, run in the European Alps. The course length is approximately 171 kilometers and the total elevation gain amounts to 32,940 feet. It is also among the largest ultra-races of its type with hundreds of runners converging every year at Chamonix in France, for what is essentially a week-long festival of running with races over various distances. UTMB is the flagship race. Ultra-runner, Scott Hawker, secured a podium finish at the 2019 edition of Ultra Trail du Mont Blanc (UTMB). Scott has been rated among the leading trail runners from New Zealand. He has featured in the top bracket at well-known trail races. He placed third at 2019 UTMB, covering the distance in 21 hours, 48 minutes, four seconds (21:48:04). Scott spared time to respond to queries from this blog:

How do you normally plan your calendar every year? How many races do you typically participate in every year and do you follow any pattern like orienting the progression towards a major event? For example, if you are doing UTMB, do you structure the rest of the year such that you save yourself for UTMB?

Yes this year was all about UTMB. I raced less this year than in previous years. And I had a pretty quiet few months race wise leading into UTMB so I could focus on training and preparing as best as I could.

In one of your post-race interviews after 2019 UTMB, you have hinted at the return of an old injury in the early part of the race. Do you suspect you were overdoing things in the preceding years? You have also mentioned of struggling to get the right diet / nutrition in place. Can you give us an idea of these years, what was going wrong and how you corrected the situation?

The niggle / injury I’ve been dealing with for a couple of years is some sciatic nerve/ hamstring pain… with it being more nerve related it’s a little up and down. It hadn’t been an issue for a few months but reared its ugly head at UTMB after Saint Gervais.

My race day nutrition just wasn’t working for me in 2018, too many gels / chews and sweet items were causing a massive thirst and I basically ended up needing to drink too much fluid, which would then cause havoc in my stomach on downhills with the sloshing in the guts. 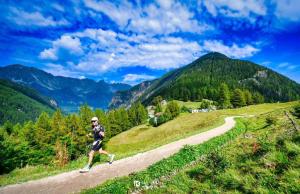 How did you plan your approach to 2019 UTMB? How many events did you participate in prior to this in 2019 and which ones did you choose? Was your approach to the 2019 edition of the event, significantly different from how you approached it in 2017?

As mentioned above, I raced a lot less this year and the races I did do were shorter distance events than in previous years…

I ran in the HK100 in January, Mt Solitart Ultra 45km in April, the Retezat 28km Skyrace in June, Lavaredo Ultra Dolomites 87km in June, the Grossglockner Ultra 50km in July and then UTMB. The spacing between these races enabled me to recover well post-race and then kick back into training.

Going into UTMB this year, what was your pre-race expectation and strategy? How had you planned to run the race?

Pre-race I was hoping to sneak into the top 10 and maybe top five if on a good day… My plan was to stick around some runners who I felt would run a typically smart race. The pace in the beginning 10km was quite slow compared to previous years so I found myself in the top five athletes from early on.

In post-race interviews you have mentioned that the first half of the race was a struggle for you. What happened; what went wrong, what caused things to go wrong? How did the situation change in the second half; what made things change?

Yes, the hamstring / sciatic pain came back and didn’t enable me to run freely in the opening 50km until Les Chapieux. I was walking down some of the descent resigned to the fact I was going to pull out as the race I was hoping for and what I wanted to achieve here, was gone. It was when my good friend Harry Jones came in to the checkpoint and said to try again as there was so much time to go that I decided to shuffle out of the aid station and try to get to Courmayeur. I was doing a nerve stretch I do a lot (every 10-12mins) and I think the super easy 5km descent was maybe enough to take some of the load off my hamstring. I was then able to start running without pain. 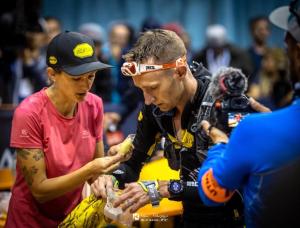 The UTMB is run in the European Alps. You hail from New Zealand, home to the Southern Alps. Are there any challenges by way of terrain / weather conditions that you face running in the mountains of Europe or are the challenges faced more personal than related to environment?

The mountains in NZ are so similar to the mountains around Mont Blanc. I feel really at home in Chamonix. There’s probably a balance of environmental and physical challenges one faces at UTMB.

I played soccer when i was younger to a provincial and national level. As kids, my parents would take me and my brother hiking and on adventures. So I found a love for nature and the outdoors from a young age.

As a kid, I seemed to always be the fitter guy in the team and the one who was running later in the matches. Once I started doing multisport races in the mountains I realized I could move well through the mountains and combining that with good fitness – it was a good match for ultramarathon running.

What attracts you to trail and ultra-running? Can you give us an idea of your training – is it structured and supervised by a coach or has it been mostly a case of you discovering what works best for you?

The mountains, the solitude but also the companionship while training and racing with friends. Also it’s a sport I can share somewhat with my wife and daughter as part of the process, which is an amazing experience.

My coach David Roche from SWAP has been guiding me since March this year, he’s been monumental in helping me develop as an athlete and get to where I am now. The exciting part is we’re only getting started. 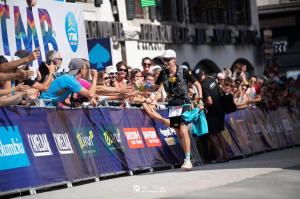 As a runner, how long did it take for you to find sponsors? At what point in your running career did they start showing interest?

Around 2014 I picked up my first sponsors. I’m so thankful to be supported by such amazing brands as VIBRAM, CamelBak, Kailas and Naked Running Band.

Being able to spend time in NZ and Australia and then the race season in Europe is a blessing. The mountains of Australia are so different from almost everything I’ve raced on in Europe so it’s hard to translate what I train in there to Europe but the trails are equally as beautiful and fun.

What is your plan going forward? Which other events do you have in mind for 2019 and 2020? Are there any changes you wish to attempt to your current paradigm of running in terms of type of events, nature of terrain and distances run?

I have 3 races remaining in 2019, the UTLO in Italy, the Mogan Ultra in China and then Maesalong Trail in Thailand. All these races are for fun and events my sponsors support. In 2020, I would like, at this stage to be back at UTMB but the rest of the calendar is undecided as yet.

(This interview was done via email. The interviewer, Latha Venkatraman, is an independent journalist based in Mumbai.)