Trained to be a football coach, Corina Van Dam, opted to use sport as means to heal and empower. Currently living in Mumbai, she has been running for several years and is now figuring out which distance suits her best.

During a recent six-hour night run in Thane near Mumbai, many runners ran determinedly through the heavy, sometimes lashing rain.

One among them was Corina (aka Cocky) Van Dam, a Dutch runner, living and working in Mumbai for the past three years. She surprised herself by covering a distance of 50.7 kilometers during those six hours.

Two weeks later, she ran a 50k race at the Igatpuri Mountain Challenge. She finished the race in six hours, 26 minutes and 23 seconds securing top position among women aged 46 and above. A week must have gone by. Then she wound up on the podium yet again in her age category, at the BNP Endurathon in Mumbai. She covered the 25k distance in 2:28:14 hours.

Corina grew up in Alkmaar, a town 40 kilometers north of Amsterdam in Netherlands. The local topography was largely flat; there was much water around and as is characteristic of Netherlands, a lot of wind. It is a town well known in the cheese business and home to a velodrome hosting the annual Dutch national track cycling championships (the European Cycling Championships is scheduled to take place in Alkmaar from August 7 to 11, 2019). Not to mention, it is the birthplace of Harm Ottenbros, unexpected winner of the 1969 world cycling championship; he came in from nowhere to win that title but earned the ire of fellow cyclists and fans for just that – being the nobody who snatched the title from under the nose of more fancied heavyweights. Alkmaar also has a private museum dedicated to the British band, Beatles.

Growing up, sport was an integral part of Corina’s education. At the age of 12, she began playing football at a local club. She commenced playing at a still younger age but there were no girls’ teams around. The Dutch are passionate about football. Alkmaar and Corina’s family therein were no different. The town is home to the football club Alkmaar Zaanstreek (AZ), winners of the Dutch football league (Eredivisie), in 1980-81 and 2008-09. Corina was good at football. The game gave her the nickname she goes by – Cocky. She trained to be a sports coach. But she soon discovered that it was “ boring to teach people sports.’’ It was rather limited in scope. She sought something more engaging; something that would touch people’s lives in a more fundamental way.

So she opted for an internship with a mental health institute. The institute used sports as medium to help mentally ill people. For 20 years, she worked at the clinic employing sports as a means to assist patients in their treatment and recovery. “ People are depressed, sometimes so depressed that they don’t want to move. As part of psychomotor therapy, I used football to treat patients suffering from depression. There is evidence that running works well to treat patients,’’ Corina said. Psychomotor therapy uses physical activity and body awareness to help in the healing process.

After two decades spent working in the Netherlands, in 2005, Corina decided to move to Kenya to work with a community-based organisation called Moving the Goalposts (MTG) in Kilifi. She was placed as a volunteer through Voluntary Service Overseas, an international NGO.  A sport for development outfit, MTG harnesses the power of football to overcome social obstacles girls and young women face in coastal Kenya. Teenage pregnancy was (and still is) a very big issue in the country. That was among topics Corina required working with. Central to MTG’s strategy was football. Located on the east coast of Africa, Kenya has varied topography that includes an Indian Ocean seaboard, the Great Rift Valley and the Kenyan Highlands famous for tea and running. Corina worked at Kilifi near Mombasa, Kenya’s second largest city situated on the coast. Roughly 4400 kilometers north east from Mombasa, across the sea, lay Mumbai, India’s financial capital. After working in Kenya for 11 years, Corina moved to Mumbai to work with Naz Foundation (India) Trust. 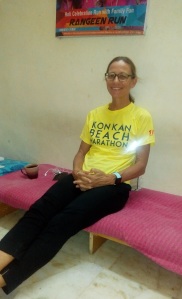 Naz India is an NGO working in the field of HIV / AIDS and sexual health. Corina works as Impact Manager at Naz Foundation. She is focussed on Young People’s Initiative (YPI), a program to empower girls by using sports and life skills education. It seeks to provide opportunities for adolescent girls. “ Many NGOs now leverage sport as tool to empower girls with reference to their body and emotions,’’ she said.

Naz India’s YPI project uses netball as sport for team building and empowering activities. “ Group sport or team sports helps tackle peer pressure, instil team work and develop leadership skills as opposed to individual sport,’’ Corina said. The choice of netball was because it is less of a contact sport compared to football and such a game appeared to suit the girls joining the program. Some other NGOs use sports such as football, basketball and kabaddi for similar work. For Naz India, the choice of sport is based on the needs and issues at hand in each of the projects that the foundation takes up. Naz India primarily works in schools, mostly trust-run schools. “ We are constantly negotiating with schools and designing our projects based on the feedback,’’ Corina said.

As an Impact Manager, Corina’s role is to make constant assessment of the teams working in schools; whether they are achieving their objectives or not. Outside of work, she continues to play football, mostly in the Mumbai suburb of Bandra. She plays for Wolfpack FC. She got to participate in local league matches.

Many football players, according to her, do not like running as a specific sport. It’s one thing to run playing football; it’s another running a marathon focused solely on movement with no paradigm of game, team or score enveloping it. However, she took to running during her teens and continued to do so through her years in the Netherlands. In Kenya, living in Kilifi a rural area near Mombasa, Corina resorted to running in the nearby farmlands. She ran three times a week covering a distance of 7-10 kilometers on each of those practice sessions. She also recalled making a brief visit to Iten in the highlands of Kenya, home to the country’s best runners. “ I visited Lornah Kiplagat and her husband Pieter Langerhorsts’ high altitude training center. That was a fleeting visit,’’ Corina said. Olympian Lornah Kiplagat, a Dutch cross country and long-distance runner, is of Kenyan origin. She is a four time-world champion and has held world records over 5 km, 10 miles, 20 km and the half marathon. The training center in Iten was founded in 1999.

Arriving in Mumbai in 2016, Corina decided to look for a house at Tilak Nagar primarily because of its proximity to her place of work at Vidyavihar, just a kilometer away. At Tilak Nagar, the well-known Sahyadri Ground became venue for her daily practice runs. She runs several rounds of the ground in 500 meter-loops. “ Many women came and asked me how I got into running. They also expressed a desire to take up running,” Corina said. Hailing from Netherlands, she beheld the scene with curiosity. “ At the Tilak Nagar ground, a lot of people were involved in various activities. But you rarely found women at the centre of the ground. It is now slowly changing,’’ she said at the small Mumbai office of Naz Foundation tucked away on the ground floor of an apartment complex. It was July 2019. Just days earlier the 2019 FIFA Women’s World Cup had concluded with USA defeating Netherlands 2-0 in the final. It was the first time the Dutch national women’s team played in the final – a point Corina recalled with pride and a feeling of much changed since she started playing football when the sport was considered a game for men.

Corina’s first stint at a running event in India was the Dream Run segment of the 2017 Mumbai Marathon, something that happened because Naz India was a recipient of free slots to the run. For someone used to regular running like Corina, the Dream Run and its wall of people ambling along was a disappointment. In 2018, at the same event, she chose to run the newly introduced 10k segment and finished on the podium in her age group of 50-54 years.

In the 2019 edition, she ran the full marathon finishing the distance in 5:15:06 hours securing eighth position among women in her age group. This was her background prior to that rain soaked six hour-run in Thane, the 50k and the 25k, which followed. She was recently appointed Pinkathon Ambassador. Through this, her responsibilities now include empowering women through running. “ I am still figuring out which distance is best suited for me. I also plan to participate in the Goa Ironman later this year,’’ she said.

Goa Ironman 70.3 or Half Ironman is slated to be held on October 20, 2019. Corina, now 54, has invested in a road bike. She cycles regularly and for swimming she visits the pool at Dharavi. She hasn’t yet done any open water swimming in India but given she grew up in Alkmaar with its share of open water and winter temperatures, hopes she should be able to tackle it.