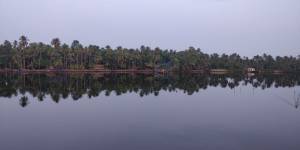 If I am along for a run, it typically tends to be slow. A slow train huffing and puffing along, valuing the sights and thoughts along the way, as much as it does, progress to destination. Here’s another one from this blog’s slow train series – this time a run in Kerala’s Ernakulam district, from Edappally to North Paravur via some lovely islands. It was a run against the backdrop of Vishu, Easter and elections.

Sleep took a while coming.

The only other occupant of the dormitory located at KPCC Junction, Ernakulam, talked endlessly on his cellphone. I was in a mood to sleep. I craved quietness. Our argument reached nowhere.  After a while the man heeded my request and went out to continue speaking. The room was now quiet.

The combined might of the air conditioner and the ceiling fan, spread a fragile cool around. It was relief from Kerala’s punishing summer of 2019. I remembered the events of morning gone by. Athey, aane medikunnathinu munpe thoti medikkanam – the old man’s quip had smacked of quintessential Kerala. There are many such proverbs and observations in Malayalam that sieve out clutter for clarity.

Hours earlier, we were three runners tackling a lovely route – just over a half marathon – from Edappally to Paravur amid heat wave in Kerala. Before long I was shades of wilting.

Truth be told, the weather that April morning was a bit forgiving. The preceding days had felt like sauna – hot and humid. The morning of the Paravur run was tolerably warm but the humidity remained.  My friends – Naushad and Vijayan – had done a superb job designing the route. We began close to Edappally, on the new highway linking Edappally to Guruvayur. At the Cheranellur signal junction, we turned on to the Container Terminal road leading to Kochi’s Vallarpadam Transhipment Terminal (the road is also host to the large hospital complex called Aster Medcity). Some distance up this road, we veered off well-built highway and made for the first of the ferries that would take us to a couple of islands and the rather intimate experience of running on their narrow roads. It was ambiance distinctly slow in pace compared to Ernakulam. In fact, one of those islands didn’t have a proper road. It had instead a broad cement path. For a significant portion of the whole way, we were in the vicinity of Kochi’s backwaters as well as places hosting shrimp farms, locally called chemmeenkettu. Naushad, who was my classmate in school, had visited some of these farms just days earlier, when the end of a season of farming was celebrated with food festival for the public. After the farming contractors have taken their share of the catch, the rest is available for the food festival, including opportunity for the public to catch shrimp. Vishu – the Malayali New Year – had just gone by and Easter was approaching. Prayer meetings were underway at the churches we passed as we ran across those islands.

The 2019 Lok Sabha election made its presence felt through posters on boundary walls and party symbols drawn on the road. We – as well as every passing pedestrian stamped on those symbols. Vehicles drove over them. The logic behind painting symbols to be trampled upon so, is beyond my grasp. As the day warmed up, reaching a ferry was opportunity to rest for my progressively wilting self. Ferries on these small islands where people seemed to know each other, were an informal affair. Sometimes, the boat is there, the customers are there but the driver is absent. You look around puzzled. Everybody is waiting. You ask and the explanation is provided: oh, he has gone to his house for breakfast. You could imagine window somewhere nearby, beyond which, sat the ferry driver sipping tea, having breakfast, watching his customers gather.  He knows the limits of their patience. They know he will come; eventually. For city dwellers like my friends and I, ferries are romantic, reminiscent of a slower past when Kerala felt like Kerala. The view from the islands is different. They have longstanding demand for bridges. At one place, the ferry operated like threatened species for the bridge, nearly complete and awaiting finishing touches loomed some distance away. What would happen to ferry when bridge becomes functional? Asked, a man on the ferry retorted, “ the bridge is not entirely complete. If it was, the ferry wouldn’t be there. Would it?’’ Two men on a canoe rowed by, unhurriedly. There was neither the noise of ferry engine nor the arrogance of traffic to be, in their passage.

Following the first ferry, we passed through Pizhala. The island’s history as provided on Wikipedia, made it interesting in the time of our run. The heat wave accentuating Kerala’s summer of 2019, assumed prominence because it highlighted vagaries in weather following as it did, torrential rains and massive flooding in 2018. Many news reports around that period of heavy rainfall recalled previous instances of flooding, among them the time a great flood is said to have choked the ancient port of Muziris near Kodungallur, leading to its eventual decline. According to Wikipedia, Pizhala – it is composed of sedimentary sand – was born in that flood of 1341 AD. Some more running interspersed with a couple of ferries, took us through Cheria Kadamakkudi and Kadamakkudi before touching Chathanad on the mainland, about ten kilometers away from Paravur. We met the old man at the final ferry between Kadamakkudi and Chathanad. A big, hefty concrete bridge straddled the backwaters here. It stood high above water and short of land at both ends. The government – so the old man said – hadn’t yet worked out details of land acquisition for the bridge to truly connect. He was utterly cynical about the bridge and similar others around. “ Every election they make tall promises. We get taken for a ride,’’ he said before launching into the earlier cited proverb, which when translated means: before you buy an elephant, you should get an elephant goad (bullhook). “ What is the point in having a bridge that doesn’t connect? They should have secured land first and then built it. Now it sits there like an elephant,’’ he said.

The most visible worries about Kerala grew similarly; promise transformed to errant elephant. Through the 1970s and 80s even as Kerala gained on social indices, the state’s politics damaged its capacity for enterprise. In direct proportion to poor employment opportunities at home and the then prevailing hostility towards entrepreneurship, the Malayali traveled out to work. Remittance economy took root. In the years since, thanks mainly to remittance economy and to a lesser degree – sectors like tourism and IT flourishing in Kerala, not to mention incomes rising in general; quality of life improved. But alongside, the state has lifestyle problems related to affluence; high degree of consumerism, reluctance to work unless it is high paid or socially respectable (a growing share of Kerala’s workforce is now from outside), garbage disposal issues, environmental degradation, lonely households and families caught between tradition and change. This overall predicament is the biggest errant elephant of all. Tackling it will find no mention on anyone’s election manifesto. Over the almost two months I spent in Kerala (from late February 2019 to mid-April), political controversies were several. They became fuel for election campaigns. Yet few of these issues seemed the sort that genuinely mattered to human life or Kerala’s future. Perhaps there is reason after all why political symbols end up drawn on the road. One of the candidates in the fray in my cousin’s constituency had promised to address garbage. “ If he wants to clear garbage why can’t he do it right away? Why wait to win elections before doing that?’’ she asked angrily.

The ferry driver, who had gone home for tea, appeared. The old man drove his scooter on to the ferry – essentially a platform on two canoes with rusty engine for propulsion. We moved by the side of the bridge, like an ant in water next to elephant cooling off in the heat.  Roughly a kilometer into Chathanad on the other side, we plonked down at a restaurant for a small serving of fantastic puttu (steamed rice cake) washed down by black tea. “ Not on cycles today?’’ the lady who served us, asked. The road in front was apparently regular route for Ernakulam’s cyclists. “ We know them. They are our friends. But we are into running,’’ Vijayan explained. Both he and Naushad are members of Soles of Cochin, the biggest running group in the region. A man, the owner of the place, appeared. “ Next time you come, bring your friends too. You must halt here for refreshments. This place gives you a feel of village life. We have developed some facilities for visitors to stay as well,’’ the owner said. Past this restaurant, yours truly slowed down progress. The heat was beginning to get me. I had to run slowly; even avail a few stretches of walking. We halted again for lemonade. Naushad and Vijayan were patient with me. The laid back-feel of the islands receded as we drew closer to Paravur, which is a bustling town. Shaded roads became few. Traffic increased. At the town’s main junction, we officially concluded the run and headed for breakfast. “ We ran a half marathon but have eaten to compensate for a full,” Naushad joked. A brief visit to my uncle’s house in Paravur and then we took the bus to Aluva, followed by the metro to Ernakulam.

By evening, it was my turn to play elephant in water; escape the summer heat. I checked into Metro Pod, a new air conditioned dormitory for backpackers at Ernakulam’s KPCC Junction, called so after the Kerala Pradesh Congress Committee (KPCC). The Congress party’s regional office has functioned from here since 1957. Until recently, it used to be in the same building as Metro Pod. Once the party vacated, the third generation owners didn’t want to pull down the building or alter its structure. They elected to work around it and find suitable function. That’s how a dormitory for backpackers materialized (a regular hotel instead would have meant changing existing structure). The well-kept dormitory fetched me sleep and respite from the heat. The KPCC office, I was told, had shifted to another building nearby.

(The author, Shyam G Menon, is a freelance journalist based in Mumbai. This article is the longer version of a small piece written by the author and published in Telegraph newspaper in April 2019)