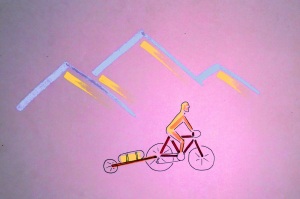 Sometimes an expedition attracts because of how it was imagined. Assigning purpose – engaging in adventure for this cause or that – is well heard of. But what about the quality of adventure itself? For example, the Indian Navy’s Sagar Parikrama project engaged beyond circumnavigation because the sail boat at its center was made in India. It wasn’t just competence at sailing that was being put to test; it was a test of competence at boat-building too. As people try various permutations and combinations, we look at an individual – now no more – who did something interesting years ago.

The first time I came across Goran Kropp was in Jon Krakauer’s book Into Thin Air, which narrated the events leading to the death of several climbers on Everest in 1996.

I read the book years ago.

Grasping the full magnitude of Kropp’s adventure was beyond me then. I was focused on Krakauer’s narrative, Everest and climbing. Many years later, I looked up Kropp again on Wikipedia. He had died in 2002, aged 35, some six years after the events of Into Thin Air.

Back in 1996, Kropp packed all his gear and equipment on to a trolley, attached it to a specially designed bicycle, pedaled all the way from Sweden to Nepal, climbed Everest without bottled oxygen or guides and then, cycled part of the way back home. This time, as I read it in renewed light, the enormity of Kropp’s adventure hit home; along with the sustained use of human powered-locomotion in what he accomplished on that trip. A photo on the relevant Wikipedia page showed him cycling with trolley attached. The page informed that he left Stockholm for Nepal on October 16, 1995 with 235lb (106kg) of gear and food. There was no mention of when he reached Kathmandu; the page said that he reached Everest Base Camp (EBC) in April 1996. Besides climbing Everest successfully in 1996, Kropp ascended it again in 1999.

Everest wasn’t the only milestone in Kropp’s brief life. The first major peak he climbed was Lenin Peak (23,405 feet) on the border of Tajikistan and Kyrgyzstan; this was in 1988. The following year he climbed five peaks in South America, three of them more than 6000 meters in elevation. In 1990, Kropp and Danish climber Rafael Jensen reached the summit of Muztagh Tower (23,861 feet), a tough peak from the 7000m-category, in Pakistan. Then he climbed Pik Pobeda (24,406 feet) in Kyrgyzstan. In 1992, he reached the top of Cho Oyu (26,864 feet); Wikipedia mentions: he drove his Range Rover all the way to Nepal; it was perhaps prelude of things to come.

1993 was likely Kropp’s defining year. In some ways, what he accomplished in this year makes his 1996 adventure that much more solid, for Everest although very high and tough for anyone to climb, is not counted by mountaineers among the truly hard 8000m peaks, particularly when attempted via its regular routes. K2 (28,251 feet) on the other hand, is rated a really hard climb. In 1993, Kropp climbed K2 solo and without using bottled oxygen. Same year he also climbed Broad Peak (26,401 feet); Wikipedia describes it as “ a fast, nonstop solo climb.’’

Kropp was born, December 11, 1966. After finishing school, he had served in the Swedish military with the Parachute Regiment, a special operations unit. He died September 2002, from head injuries sustained in a fall while ascending a climbing route in Vantage, Washington. Accounts of his expeditions – especially that combination of a long bicycle ride and a mountain climb – survive.