2018 has been a packed year for endurance athlete, Grant Maughan. Some of the races he participated in (Barkley, Last Annual Vol State, Badwater 135, Angeles Crest 100) and his ascent of Everest – he has written about, on this blog. In September he was at the 2018 edition of Tor des Geants in Italy’s Aosta Valley. In this article by invitation, Grant describes his experience at the punishing race:

It probably sounds clichéd, but Tor des Geants is about the toughest race out there.

Everything about it is on the cusp of extreme: distance, elevation, altitude, weather, sleeplessness, etc. At 330 kilometers (+200 miles) and with over 24,000 meters (+80,000 feet) of climbing it’s something for the die-hards. By the way, the climbing is hard but not as hard as the 24,000 meters of descent which threaten to turn your legs into pool noodles and afterwards into petrified wood.

The time limit is 150 hours, which may sound generous but in fact means most have to hustle. The course is basically a saw-toothed up and down of robust towering mountains that lead you over high exposed cols (saddles, passes), across high vales and into deep verdant valleys. There are some sketchy airy sections to tip toe around, semi via ferrata fixed rope / cable / steel steps and steep slippery downhills covered in small pebbles that act like ball bearings under your trail shoes threatening to send you surfing off precipices like a late paddle into a dredging wave at Teahupo’o. I heard of one major accident. Surprisingly, not others…

The sleep deprivation is probably the most difficult for the majority of runners. You have to sleep at some point and are not supposed to bivy on the trail. But some of the aid stations were full of sleeping people meaning you had to keep going. I didn’t sleep for the first two days after being told “no space” many times and told I couldn’t even rest my head on the table at aid stations. At some points I thought it seemed dangerous to send people over high passes in the middle of the night when they were weaving and stumbling from lack of sleep. I grabbed a couple of hours here and there and managed to keep semi alert though you never feel on top of it. 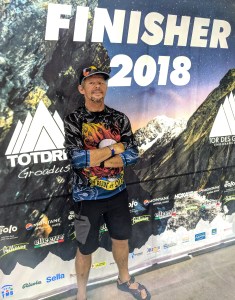 It was warm this year and a couple of days were downright sizzling. I have never sweated so profusely while climbing and spent days in sodden clothing and shoes. As soon as you stop you get chilled at altitude and night time was very uncomfortable in damp clothing. You become so putrid you can hardly stand yourself. There are opportunities to clean up at the “Life Bases” (major aid stations) where your one drop bag is transported after leaving the previous one. But these are 50 kilometers apart which can take a long time to get to in this sort of terrain.

After a huge year of events I just plugged along and tried to stay consistent, which seemed to work just fine. I found my fitness actually changed whilst underway. But my feet felt like I had stepped in a couple of bear traps and then dipped them in volcanic lava. They were in agony. My hands also suffered from clutching the trekking poles and I still have a lot of numbness a week later. I took a couple of good diggers, which is not hard to do in the technical terrain and took bark off many limbs. The best one was on the first downhill when I went over head first in a rock field and a Frenchman picked me up by the scruff of my neck out of the boulders. He asked me what I was doing and I told him my shoes were too big and I tripped over the toes (not too far from the truth)…

The scenery is jaw-dropping in the Italian Alps and the quaint ancient villages interspersed in the middle of towering spires of granite and lush green fields is something to see, even with bleary eyes. Entire towns are involved in this race when it comes through. It’s very heartening to have their help and support when you are depleted and alone for days.

It took me over 133 hours to finish and I didn’t spend much time lingering. I came off the last mountain in the middle of the night listening to my trekking poles “tic, tic” on cobblestones along darkened lanes. The final stretch through the esplanade under the soft glow of lights as locals and supporters cheered and back slapped me was humbling indeed. It’s always good to finish but in this case I could hardly go any further. Jobie (Susan Jobe Maughan) met me at the end and I limped over to the local pub where the owner bought us a beer and a Lemoncello. After one I could hardly talk. I literally slept for days afterwards…

Tor des Geants, it’s something else.

(The author, Grant Maughan, is a freelance super yacht captain and endurance athlete. A prolific ultra-runner, in 2016, he was joint winner in the 333 kilometer category of La Ultra The High held annually in Ladakh. Please look up the blog’s story list and archives for earlier articles by Grant and an interview with him.)