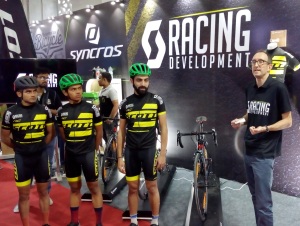 Scott Sports India today announced the launch of its first road bike team in the country.

Called Scott Racing Development, the team currently has three young cyclists. Their presentation to the media and public happened at the 2018 India Cycling Festival in Mumbai.

Prior to team formation, Scott Sports India had conducted trials involving over 200 participants from across the country. From their ranks, Sandesh Sedekar (20), hailing from Mumbai and now living in Goa, Monty Choudhary (23) hailing from Meerut and currently residing in Ghaziabad and Jehaan Panjuani (23) hailing from Mumbai and living there, got selected. “ The three road cyclists will be incubated to the Scott Racing Development training programme on a long term basis, to participate as a team in 8-10 races in India as well as 2-3 international races,’’ a related statement from the company said.

According to it, the coaching plan will focus on both physical and tactical aspects. While the physical emphasis would be on effective training as well as improvement of technique; tactical would focus on developing a race strategy and adapting to conditions. In addition, the riders will be guided on understanding performance data to help manage their training and results.

“We’re looking to put in place a structure and process that is rider-focused but ultimately gives the rider the tools and responsibility to deliver. I believe the team approach has a lot of advantages and our selection process also focused on building a team as opposed to finding individuals. We felt this group had the right dynamics to work as a team, with each one capable of handling physical responsibilities that maximise each rider’s opportunity to improve. It’s a performance-oriented programme and each year we will look to add to the team by conducting trials and reach out to an ever-wider group of young cyclists. Over time, our goal isn’t only to expand the team, but to also start picking younger talent. In the UK, academy training typically begins at age 14 and that allows them to continually have a pool of talented competitive riders,’’ Nigel Smith, Head Coach, said in the statement.

“This is the first time a global cycling brand has launched a long term training programme for cycling in India. We’ve been supporting athletes over the years, including a future stars programme focused on U-18 cyclists. We realised that while there was potential, the lack of a structured, team-oriented training programme acted as a barrier both for growth of the sport and athlete to take the next step. A holistic development approach will help the sport make its mark in the country, as the focus is both on training and performance. The team will participate in both Indian and international races over the course of the year,’’ Jaymin Shah, Country Head, Scott Sports India, has said.

The team will provide riders with the full range of necessary equipment for an elite cyclist as well as aid them in relocation, including employment opportunities, until they progress to the next step. “We believe that this program will truly allow us to be a catalyst of change at the grassroots level of the sport in the country. Our goal over the next 3-5 years is to build an elite team and expose more cyclists to this culture for it to be a viable career opportunity. Thus, launching a team was the essential step in that direction, as it also allows for building the sport commercially. Globally, cycling is seen as an attractive sport for brands, both in terms of visibility and reaching a targeted audience. To make elite cycling sustainable, we’ll also be focusing on that aspect by giving brands the opportunity to partner with a niche, but fast-growing sport,’’ Jaymin Shah said in the statement.