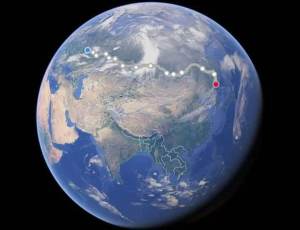 At the end of nine stages Amit Samarth soldiers on rock steady. Six stages remain. As he logs mileage longer than what he endured at RAAM, he knocks on the doors of new experience.

For a real estimation of what the Red Bull Trans-Siberian Extreme means, one needs to appreciate the vastness in the adjoining image.

Those dots linking the route of the race from Moscow to Vladivostok signify a long journey.

That perspective is only one half of the picture.

You have to also factor in the requirement to cover that expanse in 25 days on a bicycle.

The 15 stage-race spans 9100 kilometers, multiple time zones and a variety of weather and terrain conditions. At the time of writing, the race was past stage 9. Another six remained. The trans-continental sprawl of Russia hit home when the Ural Mountains was crossed in stage 4 and the cyclists transitioned from Europe to Asia.

Amit Samarth, the maverick doctor from Nagpur has hung in there finishing every stage diligently, typically placed fifth in a field of six cyclists at an average speed of 25.7 kilometers per hour. In the distance cycled so far, there have been four stages in excess of 500 kilometers; stage 3 was around 693 kilometers long, stage 6 and 7 were both around 619 kilometers while stage 9 was 557 kilometers long. So far the top three positions at the end of each stage has switched around between Russia’s Vladimir Gusev, Pierre Bischoff of Germany, Michael Knudsen of Denmark and Marcelo Florentino Soares of Brazil. Stage 7 was noteworthy for Gusev pulling out over medical issues. He was back for the next stage. The rules of the race allow a participant to leave the race twice and continue in a minor classification. The sixth cyclist in the fray is Patricio Doucet of Spain.

Amit’s progress has been steady so far. The only aberration appeared to be a time penalty he got (along with Marcelo) for a navigation error in stage 3. Amit is the first Indian to participate in Trans-Siberian Extreme. If he successfully reaches the finish line, he would be repeating what he did last year in his maiden participation at Race Across America (RAAM) – complete yet another monster race in his very first attempt. “ He is doing good,” Devnath Pillai, currently part of Amit’s support crew in Russia, said. 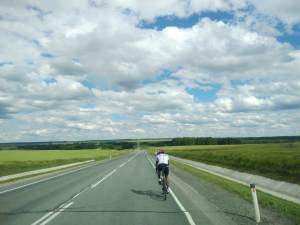 Between Amit and completion lay the fact that the second half of the race in Russia is uncharted territory for the Nagpur based-cyclist. His previous longest race is RAAM, which at around 4800 kilometers is just a shade over half the distance involved in Trans-Siberian Extreme. In an earlier conversation with this blog, Amit had mentioned that whatever unfolds beyond this mark in terms of how his body and mind behaves, would be new experience for him. To his credit, he seems to have managed the race well so far.

According to those close to Team Amit Samarth, sometime in stage 10, the racers will exceed the length of RAAM in terms of how much they cycled since start in Moscow. What should further engage those tracking the progress of the 2018 edition is that most of the shorter stages have already been done. Looming ahead are a couple of truly long stages exceeding 1000 kilometers; stage 13 for instance spans 1372 kilometers (that’s more than the distance by road from Mumbai to Chennai). Stage 10 from Krasnoyarsk to Irkutsk will be the first 1000 kilometer-plus stage. “ Fortunately we have a day off after that. It will help if he pedals through safely today and tomorrow. All the cyclists are tired. It’s their mental frame that’s going to take them to the finish,” Devnath informed early morning, Sunday (August 5).

The 2018 Red Bull Trans-Siberian Extreme will conclude in Vladivostok on August 17.

Update: Amit Samarth has completed the 1094 kilometer-long tenth stage from Krasnoyarsk to Irkutsk. The latter is one of the largest cities in Siberia. Interestingly, when the race started in Moscow on July 24, the six cyclists in the fray were two and a half hours behind India in time. At Irkutsk, they are two and a half hours ahead. As of Tuesday (August 8), five stages remained in the 15 stage-race with the thirteenth stage being a very long one.

(The author, Shyam G Menon, is a freelance journalist based in Mumbai. This article is based on information available from Team Amit Samarth and the Facebook page of the race.)