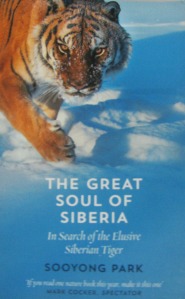 Something told me this book will be good. It turned out to be fantastic window to a corner of Siberia and its famous resident, the Siberian Tiger.

I don’t know what made me buy this book.

I just knew it will be good.

The book was about the biggest member of the cat family and it was set in Siberia, a part of the globe that must have fascinated every school student who liked geography.

Sooyong Park is an award winning documentary film maker who has devoted more than two decades to studying and filming Siberian Tigers.

His book The Great Soul of Siberia gives you a ringside view of seasons spent tracking and observing the big cat in Siberia, including some incredible close encounters.

It is written with much compassion for the book’s main protagonist, the Siberian Tiger – its magnificence as an animal; the reverence it is given by the native people in Siberia’s south eastern corner and its endangered status courtesy hunters, poachers and the pressures its natural habitat faces. Probably because he is a documentary film maker, who as part of filming studies his subjects, Park’s writing is engagingly visual and moves like a story. The science and statistics of research are there. But they do not deprive tiger of life or leach the magic from Siberia. Park keeps nature wholesome and intact; his descriptions make the landscape he is in, come alive.

The author goes about his narrative at a relaxed pace, slowly building up momentum. The first quarter of the book is largely devoted to sketching the natural environment in which the tigers live. At this stage, the book’s tigers are mostly the stuff of pugmarks in the sand and informed speculation around scenes of prey killed. It is valuable education, providing reader an understanding of how the traces it leaves are used by researchers to build a picture of the animal in question and what it may have been up to. For a couple of chapters, the tigers of The Great Soul of Siberia remain ghosts. Then, commencing with one extended stake-out in wilderness, waiting to photograph and document the tiger, the book barrels into a story spanning three generations of a tiger family. Doing so, it provides reader insight into the behavior of tigers, what each of their actions mean and how genuinely intelligent these creatures are compared to the assumptions in our head. The author’s love for the tiger and his compassion for it shine through without it ever resembling the caricatured compassion that our comic books and animated movies award wildlife.

Here you see tigers as they are, you see a feline family’s fight for survival in nature under duress. It is a tragic story. You also see what life as documentary film maker in wilderness, really means. Sooyong Park takes you into the minute details of a stake out – how they last for several weeks, the many restrictions it imposes on photographer waiting to see the elusive tiger (you have to make sure that no sign of your presence in terms of sight, sound or smell is there locally), the toll it takes on person and the reward in learning it brings even when your  cameras are smashed by tigers that have learnt to detect and destroy them, even when a tiger nearly lands inside your bunker.

This book is pure love for subject and it shows.

For me, The Great Soul of Siberia was another one of the gems found on the shelves of Modern Book Centre, Thiruvananthapuram.