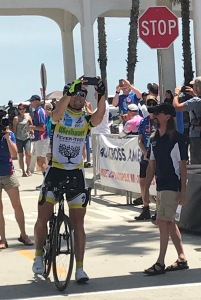 This report mixes an on the spot account of the start of RAAM 2018 with relevant background information. Rajeev G, was at Oceanside for this blog.

The 2018 Race Across America (RAAM) began from Oceanside, California on June 12.

The race, which traverses the United States from Oceanside on the west coast to Annapolis in the east, entails cycling a distance of approximately 4800 kilometers. The race ends on June 25. Last year’s winners in the solo category for men and women were Christoph Strasser of Austria and Sarah Cooper of the US.

Strasser, one of the leading ultra-distance cyclists in the world today, is racing at RAAM this year too.  While Sarah Cooper is not listed for 2018, a name to watch out for among women doing RAAM solo would be Switzerland’s Nicole Reist. Also participating is Seana Hogan of the US, veteran cyclist and six time winner at RAAM who is seeking to improve her record in the fifty plus age category.

San Diego based-engineer, Rajeev G, was there at Oceanside to witness the start of RAAM. “ Strasser was the last rider to start. He looked very relaxed and was smiling and laughing at the start line,’’ Rajeev wrote in. Strasser who has dominated RAAM in recent years, paused to take a selfie at the start line before pedaling off into the race. 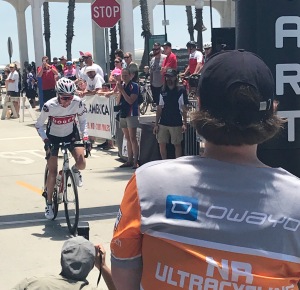 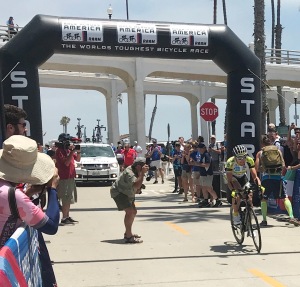 Unlike many of the other riders, Strasser did not seem to have a dedicated fan club or many supporters in the crowd at Oceanside. However everyone knew who he was and you could sense awe in the crowd. Thanks to her crew members, Nicole Reist enjoyed the loudest cheering. She was one of the early riders to start. “ Reist had the most vocal support of anyone,’’ Rajeev noted. According to him, Seana Hogan was one of the first racers to start (apart from all the RAAW riders of course). “ She was clearly very popular; terrific acknowledgement from the crowd as her name was announced. Seana was in good spirits at the start as well. She left rather quickly after reaching the starting line,’’ he said.

Compared to last year, he felt that the ambience was subdued this time around. “ Hanging around near the start, I met Bob and Darlene Mckenzie from Tulsa, Oklahoma. Bob was scheduled to ride as part of a four-person team (Team RAAM Polio). Darlene was his crew chief; she claimed that is the tougher job. They watched the start for a while before heading to the airport to pick up Bob’s three Austrian teammates. Darlene mentioned that there are fewer solo riders in this year’s RAAM, but neither of them knew why,’’ Rajeev wrote in. 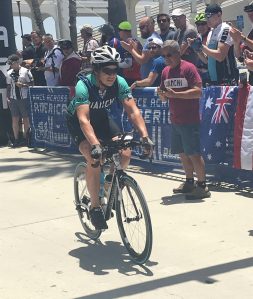 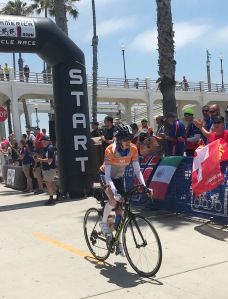 He added, “ Bob had a pretty interesting story. He only picked up road riding close to his 60th birthday six or seven years ago. He told me that he was totally unathletic before that. Apparently since he took up cycling, he has lost fifty pounds and completed almost 300 centuries (100 mile-rides). 2018 will be his third time doing the RAAM team race, each time with a four person-team. Last year his team had finished in just over seven days. This year, the goal is to finish in under seven days.’’

In 2017 Lt Col Srinivas Gokulnath had become the first Indian to complete RAAM, followed by Amit Samarth. This year there are no Indian cyclists in the fray. Sundaram Narayanan from Goa, who had registered to participate in the solo category, withdrew following injury while training in San Diego.

(The author, Shyam G Menon, is a freelance journalist based in Mumbai. This article has inputs from Rajeev G, engineer based in San Diego. He provided the view from Oceanside.  All photos used herein have been provided by Rajeev.)