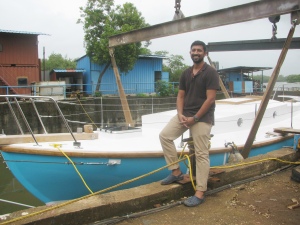 Thuriya, the sail boat in which Commander Abhilash Tomy KC will attempt his second solo nonstop circumnavigation as part of the upcoming 2018 Golden Globe Race (GGR), has become Europe-bound. She left Kochi for Rotterdam, aboard a ship, on Friday, March 30.

The boat is scheduled to reach Rotterdam in Netherlands on April 26. From Rotterdam, the boat will be taken to Medemblik, a Dutch town famous for its sailing events. Here the Thuriya’s mast would be refitted and some final work on the boat as well as purchases relevant to the circumnavigation ahead would be done. Abhilash will be in Netherlands by then along with either his team manager, Captain Dilip Donde (Retd) or Ratnakar Dandekar, owner of Aquarius Shipyard, which built the Thuriya. The plan is to depart Netherlands for UK on June 1. Abhilash has to report at Falmouth by June 11. Thereafter the team would move to France for pre-race inspection and training. GGR begins from Les Sables-d’Olonne on July 1, Abhilash said. Incidentally this seaside town in western France is also home to another famous race – the Vendee Globe yacht race, held once every four years.

The Thuriya’s passage aboard a ship from Kochi is a slight departure from plans disclosed earlier. The process of registering her in India entailed paperwork that was more complex than anticipated. She was the first sail boat being registered under new rules framed by the Mercantile Maritime Department (MMD). When there is no precedent that can be easily followed paperwork takes time, Abhilash had said when contacted in the third week of March. The Thuriya’s journey out from Goa – the pattern of it – also added to the paperwork needed. Had she sailed out to Europe on her own, procedures would have been simpler. But with boat and Abhilash required to report in UK by June 11, there wasn’t enough time to do a long voyage. She had to be shipped across; something that was anticipated months ago, except the distance got longer and the port of exit changed.

Early August 2017, when the Thuriya was floated at Aquarius Shipyard in Goa, expectation was that she would in due course – after her mast was fitted and sea trials were done – sail to Cape Town and be shipped from South Africa to the UK. That was subsequently altered to a ship-out from Kochi. According to Abhilash, any port on the Indian west coast would have sufficed but Kochi had a vessel scheduled to depart at apt time. Consequently the pattern of Thuriya’s journey out from Goa became one of first being trucked to Kochi and then, heading to Rotterdam in Netherlands aboard a ship. Such passage for a boat built in India, made the paperwork time consuming. 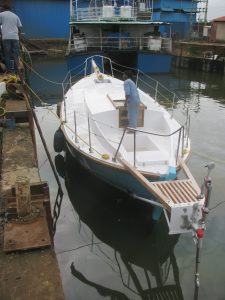 The Thuriya; view from aft, notice the small cabin, tiller and wind driver autopilot, This picture was taken soon after she was floated in August 2017 (Photo: Shyam G Menon)

There were suggestions to register the Thuriya overseas. That would have meant less time chasing documents. Abhilash did not want that. Given the boat was built in India, he felt it should be registered under the Indian flag. “ The boat is now registered in Mormugao,’’ he said on Saturday, March 30. Mormugao is home to Goa’s main port.

The Thuriya had her mast fitted in December 2017. From then till almost mid-March 2018, she underwent sea trials locally, Abhilash said. One limitation in these trials was that strong winds were missing. Abhilash had to make do with the weather conditions available. Trials done, the little boat had her mast removed for the journey by truck from Goa to Kochi and onward shipment to Rotterdam.

Commander Abhilash Tomy KC is the first Indian to do a solo nonstop circumnavigation. His team manager for 2018 GGR, Captain Dilip Donde (Retd) is the first Indian to do a solo circumnavigation. Ratnakar Dandekar’s Aquarius Shipyard has the distinction of building three sail boats headed for circumnavigation – INSV Mhadei, INSV Tharini and the Thuriya. The 2018 GGR is a repeat of the original GGR of 1968 (with same technology levels replicated), which saw Sir Robin Knox-Johnston of UK do the first solo nonstop circumnavigation of the planet in a sail boat. The Thuriya is a replica of the Suhaili, built in Mumbai and sailed by Sir Robin in the 1968 GGR. For more on the 2018 GGR and Thuriya please click on this link: https://shyamgopan.com/2017/08/11/2018-golden-globe-race-ggr-meet-the-thuriya/ For more on Sagar Parikrama and the original circumnavigation voyages of Dilip Donde and Abhilash Tomy please click on this link: https://shyamgopan.com/2013/10/27/sagar-parikrama-part-one/