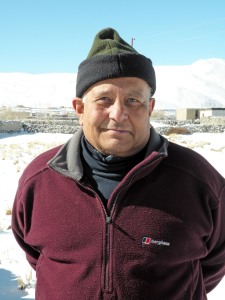 Harish Kapadia is among India’s best known explorers of the Himalaya. Trekker, mountaineer and author of many books, he was awarded the Patron’s Medal of the Royal Geographic Society. More recently he was conferred the Piolet d’Or Asia Lifetime Achievement Award by the Union of Asian Alpine Associations. He was Honorary Editor of the Himalayan Club Journal for over three decades. He spared time to talk to this blog about Nanda Devi. The interview helps anchor other articles on climbs of Nanda Devi and peaks in the vicinity, hosted on this blog. Excerpts from a chat in December 2017:

Nanda Devi and the sanctuary the mountain is located in, is roughly speaking shaped like an `E,’ albeit a curved one, not angular. Nanda Devi main and east peaks form the middle slash. The mountain is surrounded by a wall of high peaks. If I remember right, on the average that wall is around 21,000 feet high and it has approximately 20 peaks above 20,000 feet in elevation. Within the walled area there are four major glaciers. Their meltwater comes out through the Rishi gorge. It is very deep and tough to navigate. It took a long time to find the way in; Bill Tilman and Eric Shipton eventually accomplished the task in 1934. All this makes the mountain special. Further, locally, the mountain is treated as a goddess. It is seen as a bliss giving goddess. The cold winds blowing in from the high plateau of Tibet are blocked by Nanda Devi and the wall of peaks surrounding the mountain. Some of it falls as precipitation and snow in the Nanda Devi sanctuary. As a result of this blocking of winds, Uttarakhand and the plains of Uttar Pradesh are shielded from cold conditions that could have affected the region’s agriculture. This role of Nanda Devi and the surrounding peaks can be understood better from Tibet, where they show up on the Indian side as a barrier. You can see this from the foot of Kailash.

Are there other peaks with a similar setting or is Nanda Devi unique in terms of the immediate surrounding geography?

I would say Nanda Devi is unique.  There are other mountains with adjacent peaks and the appearance of a group. But nowhere do you have a sanctuary like this. In fact, thanks to the peculiarity of its local geography and layout, the Nanda Devi sanctuary has its own weather system. Clouds from the outside traveling at a height of up to 17,000-18,000 feet cannot enter the sanctuary due to the surrounding mountain wall. However, by afternoon on most days, clouds funnel in from lower altitudes through the passages and saddles in this mountain architecture causing rain and snow in the sanctuary. By evening, things clear up.

You have been fortunate to spend time inside the sanctuary. Can you describe the experience?

The route is challenging but beautiful. From Malathuni Pass you descend 4000-5000 feet to Dibrugatta and then you go all along the Rishi Gorge. The path is steep. As you enter the Rishi Gorge, you have to climb a stiff rock wall posing nasty consequences should you fall. You enter the sanctuary from the west. From there you proceed inside. It is a very nice, beautiful area. Because of the clouds coming in, everyday afternoon it would rain and snow. By 3 or 4 PM, it would clear up. We used to call this the matinee show. On one occasion we were in the sanctuary to climb Devtoli peak, which stands on the southern sanctuary wall. Having climbed it from inside the sanctuary, we decided to delay our return to camp because we didn’t want to be caught in the matinee show. So we waited on the summit, till the weather cleared up below.

In mountaineering, how prized is it to climb Nanda Devi and do the traverse between the main peak and the east peak?

That traverse is an absolutely challenging experience. It has been done only once before by an Indo-Japanese team. Earlier, an Indo-French team had tried it but they did not succeed. The Japanese did it in a thorough fashion. The traverse is very unique. But otherwise, the east peak has been climbed several times now; the main peak has also been climbed four to five times. The sanctuary has been closed since 1983. Had it been open, more people would have attempted the summit. The reason given for closing the sanctuary was – environment. Successive expeditions had contributed to garbage accumulating in that pristine area. It cannot be denied. But a part of the reason for closing the sanctuary would have been the failed attempt to install a nuclear powered device on top of Nanda Devi by a joint Indo-American team in the 1960s. It was an enterprise undertaken by the intelligence agencies of both countries. China was conducting its nuclear tests in Tibet and the idea was this device on top of Nanda Devi would be able to detect any such test. If there is a nuclear explosion, then the isotope on Nanda Devi would react – that was the logic. While they were taking the device up, bad weather set in. Monsoon was approaching. So they cleared a platform on the mountain’s slopes and secured the device there, planning to return in autumn to recommence their efforts. When they returned in autumn, the device was missing. This was in 1965-66. For the next decade they kept on looking for it. I suspect this issue of the missing nuclear device may have played a role in the closure of the sanctuary. A similar nuclear powered device was eventually installed on top of Nanda Kot. It was removed after a few years, given new technologies for monitoring had developed by then.

After the Nanda Devi sanctuary staying closed for years, I was leader of a team from the Indian Mountaineering Foundation (IMF) that went in to take stock of the situation. We found few signs of the sanctuary having been actually closed to people from the outside, despite it being officially shut. The trails leading to Nanda Devi appeared regularly used and there were multiple trails even within the sanctuary. The sanctuary has four sections. Seeing how poorly the closure had worked, I asked subsequently that at least a limited number of mountaineering expeditions – say not more than two teams per section of sanctuary per year – be officially permitted with adequate regulations in place. A few officially permitted teams in the sanctuary from time to time would also serve to keep an eye on what was going on. But the suggestion was not approved by state authorities. Alongside there is also the prevailing decision by Parliament that the sanctuary be closed. A generation or two of Indian mountaineers have lost their chance to see the main peak up close.

Given its height from bottom to top and the gradient of climb, is Nanda Devi among the tougher mountains to climb?

One of the tougher mountains – yes it is. Is it the toughest? No. However one needs to draw a distinction between known routes on the mountain and unclimbed ones. One of the ultimate ascents in my opinion – waiting still to happen – is the climb of the west face of Nanda Devi. From bottom to top, this should be in excess of 10,000 feet. It is steep rock. The north face of the mountain is also difficult. But it was climbed by the Americans. The regular route on the main peak is tough but not impossible. And that traverse – that is yet to be repeated. The traverse linking the two summits is two kilometers long and at an average height of 22,000 feet. It is very challenging.

There are some other fantastic climbing challenges also remaining in the Indian Himalaya. In Ladakh you have one of the faces of Saltoro Kangri II. That peak is hard to access for climbing because it is right on the border. Then, there is a peak called Hawk on the Siachen Glacier.

(This interview is not wholly verbatim. The original text, which was conversational in nature, was edited for focus on Nanda Devi, particularly the mountain from a mountaineer’s perspective. The edited text was approved by Mr Kapadia before being published here. The author, Shyam G Menon, is a freelance journalist based in Mumbai.)