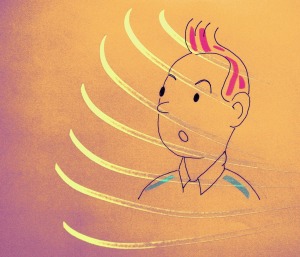 Many decades ago, two significant developments happened near simultaneously, in my extended family.

Two uncles, two comic strip heroes and a bunch of school going cousins – that was the context.

My uncle Narayana Pillai got me Flight 714, my first title from the series showcasing the adventures of Tintin. Until then, the only illustrated narratives I was familiar with were the ones from Marvel, DC, Indrajal and Amar Chitra Katha. They had strong following among school students, to the point that classmates with bound volumes of comic books were important people to know. I didn’t have bound volumes. Although my mother helped out by borrowing bound volumes from a local lending library, in general I suspect, my parents and grandparents held the view that comics, while popular, made for simplified narrative requiring less imagination. Reading was encouraged, purchase / borrowing of wholesome books approved. Days when the cousins got together typically featured a morning or afternoon of painting. Imagination was encouraged. A picture may speak a thousand words but the mind gets useful stretch if it can paint a picture from a word or a theme, perhaps even nothing – that seemed the approach. Into this ambiance landed Flight 714 and at the house of my cousins – Rajeev and Manju – thanks to another uncle: Sachidanand, a handful of books featuring Asterix.

It took me a while to warm up to Tintin. But you guessed it right – it took no time to like Captain Haddock. Who can forget “ thundering typhoons’’ and “ blistering barnacles’’? I also remember liking Skut for no stronger reason than that he was a pilot in Flight 714. Those days I shared a craze for aircraft with my cousin Jayu. Both of us had those small, thick Observer books with plenty of fighter planes in it and we spent time piecing together our respective air forces, which then competed for supremacy in the sky. We also made model aircraft from cardboard, Jayu being infinitely better at the job than I. Flight 714 thus landed at the correct time. My mind was ready for adventure. What attracted me to Tintin were also perhaps the size of a Tintin book and the average length of a story. Uniquely, it was bigger in size than the regular comic book. It told a full-fledged, long story spanning continents, sometimes taking two issues to finish; a sort of early introduction to the graphic novel format that would become popular decades later.

What I remember most is however something else.

Maybe it is a larger Malayali trait, maybe it is a family trait – I don’t know which of the two is correct –we had the tendency of analyzing experiences. At near fifty, I understand childhood better now. It is a phase when you have the luxury to do something because you feel like it; no analysis in the mix. Impulse and intuition are not unfashionable. Our passage to adulthood is fueled by just the opposite. We become adults by analyzing to make sense, till we become armchair analysts of all that is alive and stirring. Expectedly, my extended family put Tintin and Asterix under the scanner. The emergent fascination among the children for these two series triggered discussion among the adults. It was a discussion revolving around idea, story and artwork; we had no clue of such political details like Tintin’s origin in a Belgian newspaper identified with far right views. I remember the outcome. Asterix stayed ahead because its illustrations were bolder and had more flourish. Asterix stories with their play on characters’ names were also more deeply imagined and as the more sophisticated, layered comic book it was respected that much more because childhood is after all stepping stone to more sophisticated adulthood. None of that bothered me. I like Asterix. But Tintin is special. Something about it appealed to childhood’s idea of adventure.

My uncle probably noticed the brewing interest. His work took him often to other cities in India. Occasionally, it also took him overseas. Almost always, he returned with another title from the Tintin series. All the titles were displayed on the back of each book. So it was easy to identify what you hadn’t read and hunt for it. Tintin made me do crazy things. One of them was my scale drawing of a rocket. I arrived an evening with my father at the house of Rajeev and Manju. Their father – Govindan (he was a physics professor) – smiled and indulged me with his time and patience as I explained how my rocket would work. It was all well illustrated in the drawing on large graph paper – the fuel tank would feed the engine and my rocket would escape Earth’s gravity and be moon-bound. Why shouldn’t it? I had a rectangle with dials on it, labeled ` control panel,’ another rectangle with pipeline attached, labeled ` fuel tank’ and yet another one marked ` engine.’ That last rectangle ended in a nozzle copied from one of the jet engines in my Observer book. In retrospect it’s a good thing I didn’t join the Indian space program.

In those days of economy yet to open up like now, each Tintin bought traveled to multiple homes. At every home a kid or two eagerly lapped up the contents. Sometimes titles got exchanged at school; I will lend you my title if you lend me yours, which I haven’t read – that sort of deal. And unlike, regular comic books, which few bothered if they got misplaced or torn through lending, deals over Tintin and Asterix were deals of honor. Misplace or mishandle, you risked being branded unreliable for life. That adds a touch of mystery to how my Tintin collection – all titles acquired save four; that’s 20 out of 24 – fared, once I reached college and employment beyond. Back home in Thiruvananthapuram, not one title survives. I hope some kid; somewhere is still reading what I collected and drawing rockets and submarines. Slowly as Tintin titles became more easily available in India, we started buying the books ourselves (a visit to Kochi was always incomplete without dropping in at PAICO). One by one, we collected the titles mentioned on the back cover of every Tintin book. Then the search commenced to at least access and read titles not mentioned there; titles mentioned in Tintin lore or in conversation among his devoted fans. Meanwhile, my uncle’s children, Lakshmi and Hari, also grew interested in Tintin and started their own collection.

I never outgrew Tintin. I can still pick up a title and enjoy browsing through it. In my adult life, the arrival of Steven Spielberg’s film on Tintin was a much awaited event. My favorite character was Captain Haddock and I was utterly curious to see how he would be on celluloid. I was disappointed and it isn’t Andy Serkis’s fault. My curiosity was in seeing which actor would pull off that role well and being an avid watcher of Hollywood films, I had even attempted some casting in the mind. As it turned out, the movie was made using motion-capture technology. That put it neither here nor there. It reminded me of the title: Tintin and the Lake of Sharks. Of all the Tintin titles I had, this one – assembled using stills from a 1972 animated film – had attracted me the least. When it comes to converting comic books to movies, I am not a fan of hybrid. After all, Tintin is not a Jungle Book, wherein modern animation technology makes animal characters life-like rendering the film a classic. Tintin sits firmly in the world of people and it surprised me that the producers deemed hybrid imagery, acceptable. I felt that was a letdown, considering Tintin has been portrayed before on stage and several other comic book heroes have been adapted brilliantly for the big screen.

In early August 2017, Lakshmi mentioned that a prominent item at Hari’s home in California is a poster of Tintin. Among his favorite shops is one where he picks up “ his Tintin stuff.’’ It made me wonder: what made her father Narayana Pillai, pick up Tintin books in an era of closed economy in India? Laskhmi’s own take on it was that her father bought it for the children in the family but he wasn’t above reading it on a flight himself! But then, unlike today when the media floods you with trends instantly, those days a comic book hero from Belgium was as distant as Belgium itself. You were compelled to read about Superman, Batman, Phantom and Mandrake because they were around. But Tintin? He didn’t have any PR machinery promoting him in the Indian media. It left the question: how did Narayana Pillai born and brought up in the Kerala of the 1940s and 50s, come to know about Tintin? He had never shared those details. A day into recollecting my thoughts around Tintin, I called up my uncle at his home in Aluva. Now in his mid-seventies, he laughed upon hearing that the phone call from nephew nearing fifty years of age was connected to his Tintin purchases from long ago. There was no loss of time in recollecting details. The bulk of the Tintin books were sourced from a book shop at the Mumbai airport of old, which my uncle visited during his business trips. “ I used to look for illustrated children’s books. That’s how I came across Tintin. I flipped through its pages and felt the characters in the book were interesting. The hero was a young journalist. When I bought my first Tintin, I had no idea how it will be. But from that one book, we moved onto many more, possibly the whole lot…Hari’s collection is still here,’’ he said. Further, in as much as he bought the books for children, he loved reading Tintin himself.