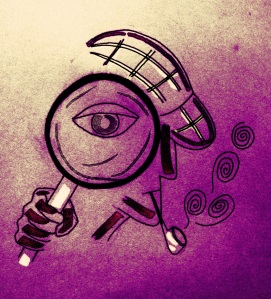 The only character I have come across in my readings who avoids boredom like the plague is – Sherlock Holmes.

It took me years to understand why I liked him so much. I credit the delay to our rationalization of the boring as essential ingredient for successful life. Boring is our Voldemort; we don’t speak of it lest we lose livelihood. In such a world – one that increasingly ignores what it means to have a brain – Holmes makes it alright to be you. His continued existence, even as fictitious character, assuages the sense of uselessness you accumulate for failing due to your own capabilities. Sir Arthur Conan Doyle created Holmes. But many others have contributed to his splendid evolution since, into an emblem of being alive.

Between film and television, I believe it is the latter that got Holmes right. The late Jeremy Brett is the best Holmes I have seen. By that I don’t mean staying true to what the creator of the character wrote; I mean more bringing the character alive. However Brett’s Holmes is in a context from the past. There have been later reinterpretations of Holmes; attempts to position him and his stories in more contemporary ambiance. My initial fling with the two TV series – Sherlock and Elementary – made no impression. I couldn’t accept Holmes as super warrior adapted for digital age or Watson as a woman. I mentioned this the last time I wrote about Holmes on this blog.

I am intrigued by the nature of connect these series have had on me.

The connection is inspired less by Holmes and more by his immediate and extended ecosystem. That, I believe, is where the portrayal was tweaked for renewed appeal. The two series, while retaining Holmes’s known traits added new possibilities, particularly in the interplay between him and those around him. Embedded in the interplay are moments we quickly empathize with.

In social response familiar to those staying single, the detective-doctor duo of Sherlock is sometimes mistaken for being gay as they are inseparable friends. When it comes to Holmes’s life and work, Watson, his wife Mary, Lestrade, Mrs Hudson, Molly Hooper and Mycroft – all form a protective ecosystem, alternatively frustrated by the consulting detective’s sharp insight delivered bluntly and admiring it. Moriarty vacillates between being an evil character outside of Holmes to being the stuff of his own mind; a natural and inevitable counterbalance to the faculties he possesses. In Elementary, Watson is a lady doctor who accepts a position as sober companion keeping an eye on Holmes, cast as a recovering drug addict. Elementary has Holmes based in New York and assisting the NYPD. In both TV series, the police as a whole are not welcoming of Holmes. But Lestrade and Captain Gregson, as individuals, are very supportive.

There are two major factors common to both these TV series.

In an episode from Elementary, as Holmes sits nursing a fever and the NYPD texts of a dead body found in an abandoned building, Watson reminds a Holmes eager to leave for crime scene that the police don’t pay him for his services. “ Watson, you should know by now that boredom is far more dangerous to my health than any fever,’’ he replies. As scathing and unforgiving are his observations of boring world, equally strong are his slides to vulnerability. Unlike the old Holmes with cocaine and Irene Adler for vulnerability, here the vulnerabilities are many and the occasions when they are on display are also many. There is a pronounced degree of seeming misfit. You have characters being publicly sarcastic of Holmes. Recall Sergeant Sally Donovan and her word for Holmes – Freak? The name calling doesn’t hurt Holmes. It hurts us Holmes fans.  In Sherlock, he cracks up (remember the episodes around Watson’s wedding?). In Elementary, he often stands there like a person wronged. As Watson’s tenure as sober companion drifts to a close, Holmes admits in a moment of weakness that his life rendered dry and impassive by the science of deduction is not how he wanted it to be. He says that he would miss the collaboration with Joan Watson if she went away. What stifles a more direct plea for help and understanding is ego. Benedict Cumberbatch and Jonny Lee Miller – both fantastic as Holmes reinterpreted – have captured this struggle well. I found myself lapping up episodes from both the series.

The above mentioned vulnerability, which probably strikes a chord with many, has been critical to Holmes’s continued evolution and presence in our lives. I suspect the reason it strikes a chord is because so many of us, while hardly as intelligent as Holmes or given to deduction, are nevertheless in terribly boring situations and unable to do anything about it. Our capabilities are wasted. We are intellectually alone. Society attaches little value to insights beyond the mundane. Money favors that which matters for its growth and mundane fits the bill eminently. Money also likes stability. If you aren’t naturally wired for enduring this combination or lack compelling reason to tow its line, you risk becoming outcast. For some of us at least – the ones declining to endure such boredom or asking questions about it – our vulnerability stands exposed. We wish for Watsons and Molly Hoopers to emerge by our side. We crave supportive ecosystem, even if it be four or five people, which is all Holmes has. From attracting us by his riveting brilliance as consulting detective, Holmes has transformed through the past few decades to attracting us for how he pays for his brilliance – there is his loneliness, there is his isolation. Given perspective is a product of subject and beholder, Holmes’s transformation is equally a commentary about the beholder. It is a state of the world report.

Brett’s Holmes was a wonderfully engaging portrait. We peered through time into the goings on at 221B Baker Street; it was a period of syringes reused and carriages drawn by horses. In contrast, the Holmes of Sherlock and Elementary remind us of contemporary predicament. He becomes a figment of our straightjacketed brain navigating environment dismissive of its insight and creativity. The ecosystem offered by Watson and Holmes’s few other friends keep him as what he is while Moriarty, cut from the same fabric, represents what can dangerously be.