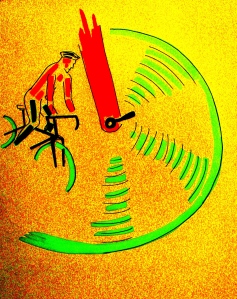 It was a hot day.

Tired, we sat on two survey stones by the road, watching the relentless traffic. Ahead was the regular 20 km-long choke section of our weekend route, where traffic would be at its worst. Cars and massive trucks would barrel down on us. It depressed; made us think of the contemporary predicament in cycling.

My friend worked at a bank. He liked to cycle. One of his recent posts on Facebook was that wonderful news from Germany about the first section of a proposed 100 km-highway meant exclusively for bicycles, opened. According to a related news report, the fully commissioned highway is hoped to take 50,000 cars off the road every day. What adds significance is that Germany is both one of the world’s biggest manufacturers of automobiles and home to the legendary autobahns of motoring. Supporters of the cycling highway say: such projects can’t happen without the state’s backing. There is rising awareness in cities abroad that more cars can be unwieldy. Neither my banker friend nor I can imagine the same happening in India. Here, we value power as measure of having arrived in life. Two wheels aren’t powerful enough. Absence of engine worsens it. When you are out running or cycling and behold an automobile on the road, your greatest worry is how that sense of power and its display by driver will unfold. You on two legs or two human-propelled wheels and person steering engine-powered platform with four wheels or more – these are distinct class categories in the hierarchy of power. For us, two legs and two human-propelled wheels are bottom of the pyramid.

Between more cars on the road and more cycles on the road, the latter doesn’t impress because it isn’t as big an industry or employment multiplier as automobiles. Critics have pointed out that the social costs of the automobile industry are in the negative in some countries. Equally real is planet of seven billion people (1.2 billion in India) with accompanying need for jobs. In the closing part of the twentieth century and the early part of the twenty first, several developing countries eyed car manufacturing projects as means to create employment. As pollution and climate change take hold with consequences for the auto industry, I wonder what governments are thinking now.  Notwithstanding last year’s scandal of a major German automobile company cheating on emission norms, governments will likely persist with the old paradigm. Vehicle numbers in India will increase with corresponding rise in pollution and congestion. The convincing alternative is embracing certain ideals just for the sensible ideals they are. Having fresh air to breathe and less congestion around is not something to balance with our survival. It IS survival. But when did ideals and alternatives guarantee quick return on capital? As the rat race tightens and the cost of doing business goes up, all that matters is return on capital. “ We are obsessed with return on capital,” my friend said. The tried and tested, old wine in new bottle – such approaches flourish. Room for experiment shrinks. Everything surrendered to return on capital is meaningful change also slowed down alongside. A 100 km-cycling highway may be a bad financial investment. On the other hand, it represents a clean, interesting future.

Every February as the union budget approaches, my mind goes back to a budget some years ago which hiked tariff on imported bicycles. It was meant to stop cheap imports. But it hurt anyone eyeing the imported premium varieties for enjoyable cycling, in an Indian manufacturing scene that hadn’t stirred out of its comfort zone of making utilitarian models. Since then, to the credit of the local bicycle industry, it has grown a presence in the premium segment. The evolution is slow; there is no urgency. My friend and I wondered: have we seen any advertisement, any social campaign by the Indian bicycle industry on promoting cycling and a cycling friendly-environment? We weren’t talking of posters advertising cycle trips at a bicycle store or a few bicycle stands with commuter bikes in a few cities. We weren’t talking of celebrities endorsing cycling or sponsored cycling events and races. We weren’t talking of those from the bicycle industry regularly participating in Delhi’s Auto Expo, billed as Asia’s biggest automobile show. They typically showcase very expensive bicycles that serve as statements for brand building. 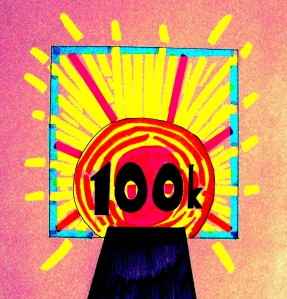 Cycling, like running and unlike motoring, is environment friendly and keeps you healthy. We were talking of a generic campaign for cycling that is comparable to how India promoted the consumption of milk and eggs. The automobile industry never tires of pushing its case. Even today, despite the social costs of motoring being unbearable in some places, the industry aggressively markets itself. Has the bicycle industry been as vocal as the auto industry when it comes to protecting and promoting the idea of cycling? Do they ask for bicycle lanes; do they ask for motorists to respect bicycle lanes and be aware of cyclists on the road? That is quite different from guarding domestic turf through import tariffs in the union budget. Did the bicycle industry promote cycling or highlight its virtues nationwide when the country was following the news about Delhi’s odd-even scheme, the first serious intervention in India against air pollution? Aside from the routine photo of a senior government official or celebrity on a cycle, we couldn’t remember seeing or hearing anything substantial. Times of auto industry questioned don’t seem opportunity enough for bicycle manufacturers to assert their case? It appeared so. Interestingly, some months ago, the CEO of a bicycle company said in the course of a conversation that the Indian cycling experience has to be improved for growing the bicycle market, particularly the premium segment. After all, we invest in a bicycle to enjoy the experience of being out with it.

Fifteen minutes went by at those two survey stones.

We drank water and had some snacks.

Then, we resumed cycling.

If you sample the list of the world’s top box office hits, you will be amazed by how many movies therein are the stuff of fantasy. We love escaping a reality beyond our control. At the start of the 20 km-long choke section, I indulged my pet fantasy: magically erase all that traffic with a special effects-wand and imagine one long stretch of road with just joggers and cyclists on it. Wannabe wizard traded fantasy for reality, the moment the first big truck rumbled dangerously close by.